Students bring Big Foot back to the stage 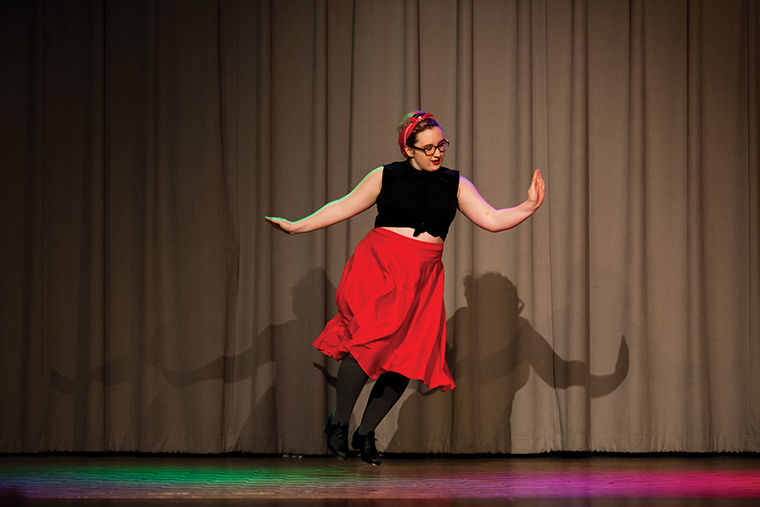 Robyn Wilson, a freshman dance major and one of two winners of Big Foot, said she started tap dancing when she was about 3 years old.

The showcase’s dance styles included improvised, freestyle and interpretive dances. The audience cheered and clapped as dancers stepped up to the stage to perform.

Wilson, a freshman dance major, said this was her first performance in front of students. She performed a tap dance routine to Duke Ellington’s “It Don’t Mean a Thing (If It Ain’t Got That Swing).”

“I was really nervous, because a lot of my new friends had not seen me dance,” Wilson said. “I was also nervous because the floor was slippery, and I was worried about wiping out.”

Calhoun, a junior cinema art + science major, said she takes African dance classes at Columbia. She described her performance at Big Foot as a freestyle dance.

Calhoun added that she had not danced in front of an audience since taking dance lessons as a child.

Calhoun said she loves various forms of dance and is exploring different styles outside of her major.

“I felt so alive when I got up there,” Calhoun said. “I have not felt that in a while. I feel like it pushed me to go after what I want and not be afraid.”

Jerel Ballard, a junior journalism major and president of the Student Government Association, hosted the showcase, which was organized by the Student Programming Board.

Ballard said SPB wanted someone new to host the event, so they selected him. He added that it was a good way for SGA to work with SPB on a project.

“One of the goals SGA has this year is to be more engaged in the community—not just the Chicago community but the college community as well,” Ballard said. “Having the SGA president host [Big Foot] was a good way to collaborate.”

Ian Valiente, a junior business & entrepreneurship major and president of SPB, said Big Foot used to be a regular event at the college.

Ballard said this is the first time SPB and SGA have collaborated during the 2015–2016 academic year, and he said he thinks the event was a success.

Valiente said SPB’s goal is to make Big Foot as popular as Big Mouth, adding that the group has been planning the event since the summer to ensure it was well prepared.

“We are trying to bring [Big Foot] back again so we can acknowledge the dancers,” Valiente said. “We want to give appreciation to the dancers, too, because we are an art school. We want to make sure we acknowledge other talents here.”

Monique Doron, a junior design major and SPB’s director of Communications, said she hopes Big Foot will become a monthly event like Big Mouth, saying it is a goal of the student organization to branch out and create other, similar events.

“Since [Big Foot] went away, we wanted to bring it back, give it a fresh new face [and] give it something different,” Doron said.

Austin Morin, a sophomore business & entrepreneurship major and SPB’s director of Finance and Sponsorship, said Big Foot allows students from disciplines outside music and comedy to be featured.

“We really want to get a good representation of what Columbia is [at Big Foot], rather than just the audience and stage side to it,” Morin said. “Rather than a guy or girl with a guitar singing a song, we want dancers, we want poets, and we want all different kinds [of artists.]”