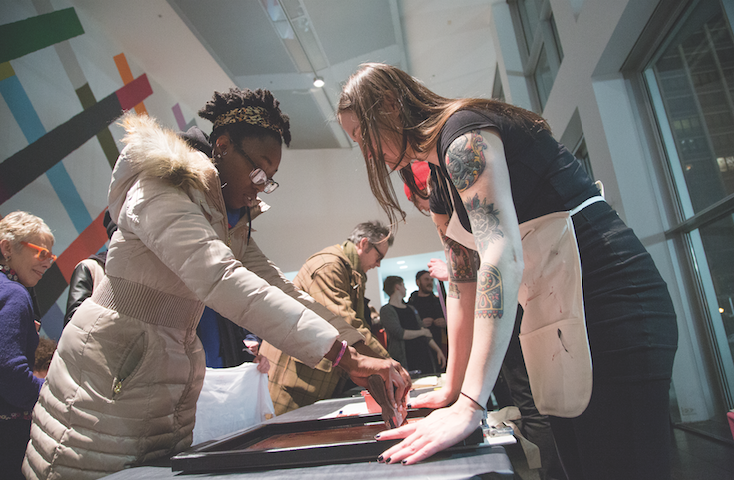 Jennifer Reeder started the Tracers Book Club a year and a half ago to reinvigorate the feminist and equality movements in the U.S.

The Tracers Book Club began as a book club among friends, Reeder said. But as time went on, it became less about reading and more about using artistic practices to bring nationwide awareness of feminism and equality.

“[Tracers Book Club] started as a conversation on social media between my friends and I about dusting off the word feminist,” Reeder said. “[We wanted to] rethink social justice and find a new approach to community engagement and promoting human equality.”

The Tracers had a Feminist Parking Lot event on March 3 at the Museum of Contemporary Art, 220 E. Chicago Ave., and attendees were given the chance to make different crafts with the help of some up-and-coming Chicago artists. Jessica Caponigro, an artist who worked at the event, said Reeder approached her about running a screen-printing demonstration at the event.

“We had two screens. One said ‘Feminist as F#ck’ and the other had a giant vagina on it,” Caponigro said. “I made two mobile screen-printing stations, so I briefly explained it to people and then they printed

Michael Green, programmer of Public Programs at the MCA, said he first started planning the event with, Reeder in the summer of 2014. He said she was a pleasure to work with and the MCA was excited about hosting her and the rest of the Tracers group.

“[Reeder] is not just a really great artist, but she’s also somebody who works with and brings attention to others and young Chicago artists,” Green said. “She’s the perfect fit in terms of all the work she has done for our public programs.”

The response to the Feminist Parking Lot event was extremely positive and each station at the event kept the community engaged, Green said. Reeder said the turnout for the event was beyond what she had expected. Event attendees were lined up to make screen-printed tote bags and zines and to get their hair braided by one of the artists at the event.

“We have some regulars that show up and support Tracers events, and there were only a couple of those people there,” Reeder said. “It was a whole new crowd. Lots of young people came, which was really great. It was a racially diverse group, and it felt like this is exactly what we want people to take away from a Tracers event.”

Caponigro said the Tracers are committed to this conversation concerning equality that everyone needs to participate in to help the world become more welcoming.

“The [conversation started with the] book club and then the Feminist Parking Lots,” Caponigro said. “Tracers is sort of integrating the conversation into these activities in subtle ways, but if no one is talking about [feminism and equality], nothing’s ever going to get done.”

The conversation that the Tracers promote needs to happen because societal equality has yet to be achieved, Reeder said.

“Our culture still has a fear of anything that’s not male, white, straight and able-bodied, and that role still has so much power,” Reeder said. “Until equality gets better, it feels good to wake up every day and think on some tiny level I am doing my part to make this world a little more humane.”

In the Tracers’ early stages, the club developed “You have been traced!” cards that are meant to be given to someone when they say something racist, homophobic, sexist or hurtful to another person. The club based the cards off 1980s artist Adrian Piper—a light-skinned African-American woman who was commonly mistaken for  being a white woman—who handed cards to people if they made racist comments during conversations

“I’ve always loved [Piper’s] project because you don’t have to bang your fist on a dinner table and say, ‘You’re racist and that offended me,’” Reeder said. “[Piper] would slide the card across the table and watch the reactions of people when they had realized what they said.”

Reeder said a member worked with someone who always made offensive comments toward her, and she wanted to find a way to confront him about it. The Tracers used the phrase “You have been traced” because it combined a few of the phrases that are part of the club’s conversations regarding feminism and general equality, Reeder said.

“[‘You have been traced’] stuck instantly, so I made these cards that are about calling out behavior that doesn’t have to be discrimination-based,” Reeder said. “It could be something that was racist, homophobic or even disability-based. When we have experienced something or have been an aggressor, I would like to think sometimes people don’t understand how hurtful their comments are.”