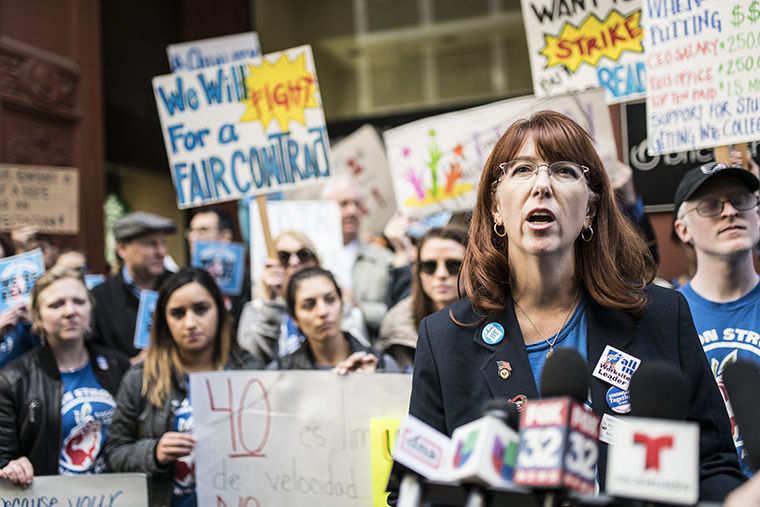 UNO Charter Schools Network’s teachers and staff, who plan to strike on Oct. 19 in hopes for a new contract, rallied on Oct. 13 and held a press conference at 209 W. Jackson.

Teachers and staff of the Chicago UNO Charter School Network will make history Oct. 19 as the first charter school known to go on strike if its management and district cannot reach an agreement, according to an Oct. 6 press release from the United Educators UNO  staff website.

On Oct. 6, 531 members voted to confirm the strike authorization.

Similar to the Chicago Teachers Union and the public school system, UNO negotiating a new contract. The union is asking for a 32-student classroom cap, shorter hours and no increase in pension and health insurance contributions, according to United Educators UNO spokeswoman Erica Stewart.

“We are not striking for sure; we are still working really hard in negotiations, and we are [trying to] come to an agreement,” she said. “We’ve been working going on eight months. We’ve had countless meetings. [Management] hasn’t had a huge sense of urgency until the last week, since we’ve announced the strike date.”

Stewart added that UNO is hoping management will compromise and meet UNO halfway on some of its demands.

Overall, management at UNO Charter School Network wants to deduct total teacher pay by more than $500,000 per year by improving teachers’ schedules, deny teachers’ cost of living increases for two years, deny support staff either cost of living or step increases for 2016–2017, and only grant 1 percent raises for 2017–2018 if the networks budget is reduced, according to the press release.

“The basic problem is the boss is claiming budget cuts they can’t justify,” said Chris Baehrend, president of Chicago Alliance of Charter Teachers & Staff.  “We’ve got great schools, and we’re afraid quality is going down. The cuts are unnecessary, and they’re harmful.”

Baehrend said that the UCSN teachers can either accept cuts that are going to make their schools worse, or they can stand strong and fight that the cuts .

“They’re choosing to defend their schools, even with the cost of personal sacrifice,” Baehrend said. “People have mortgages and things to pay. They’re teachers; they don’t want to be out of the classroom. They want to be in the classroom.”

Special Education Apprentice at UNO Andy Crooks explained that the teachers are working to provide a better educational environment for their students.

“Everything we talk about actually gets to the heart [of the issue],” Crooks said. “Providing a quality education for the kids, providing circumstances where teachers can spend years of their lives doing this because turnover is not good for education. Kids need consistency to learn.”