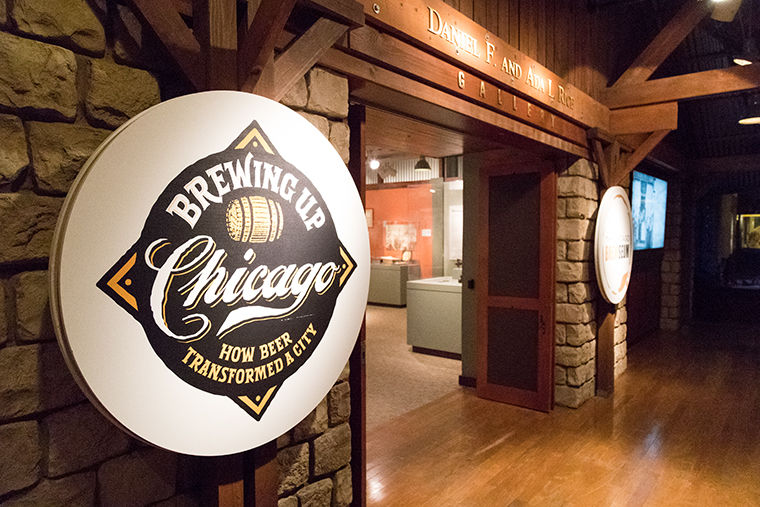 Brewing Up Chicago: How Beer Transformed a City educates viewers that beer is not just a beverage at the new exhibit hosted by the Field Museum.

Raw barley, wheat and oats are malted, ground and mixed with hot water. The water is boiled, and flavoring is added. This is when everything starts spinning, becoming a whirlpool, before being cooled to room temperature for fermentation. The brew is aged for several weeks before it is finally ready to be packaged.

The Field Museum’s new exhibit “Brewing Up Chicago: How Beer Transformed a City,” 1400 S. Lake Shore Dr. explores Chicago’s extensive beer history. It was organized by the Chicago Brewseum and runs through  Jan. 5, 2020.

The Chicago Brewseum, formed in 2014, is dedicated to teaching the public about the rich history and diverse culture of beer, said Founder and Executive Director Liz Garibay.

“Beer is more than a beverage; it is a powerful cultural source that brings people together and has the ability to make change,” Garibay said. “My goal is to show how beer has been present and an important industry … over the course of history in different places, geography and people. The great thing about beer is that it connects people of all backgrounds and cultures.”

When the Chicago Brewseum was first launched, Garibay invited the Director of Business Enterprise at the Field Museum, Megan Williams, to visit because she was interested in Williams’ work with the Field Museum’s personal beer, Garibay said. From there, the relationship thrived and eventually led to the exhibit.

The exhibit at the Field Museum uses artifacts, maps and images to tell the story of beer and how it relates to immigration.

“The Midwest has a very rich German heritage, and that’s one of the main reasons why the beer industry flourished here,” Garibay said. “Agriculture was also an important industry, so it was almost like magic coming together.”

The greater Chicago area was a hub for German immigration in the early 1800s, Garibay said.

Museum visitor Ana Kim said the exhibit had a lot of information about Chicago’s beer history that she did not know.

“[I didn’t know] beer had a foundation in Chicago and that [it circles] back to the early 1800s,” Kim said. “It’s interesting to see the maps and the layout of how the city used to be.”

The Field Museum’s Field Bistro, located on the main level, serves some of the beers discussed in the exhibit, such as Pabst Blue Ribbon, alongside other locally-sourced food.

Florida native David Bartolucci said he stumbled upon the exhibit and was immediately interested because of his love for beer.

“Last year, I had a huge bottle of beer; it was $25 for the bottle, but it was pretty cool because you can only buy it in the museum,” Bartolucci said. “Like I said, I’m a beer guy, so when I saw [the exhibit], I was like, ‘I’m excited to see it.’”

This is the first exhibit that the Chicago Brewseum has installed at the Field Museum.

“We did a great job at telling a narrative about beer that [has] never been told before in terms of Chicago history,” Garibay said. “It shows how people arrived with the idea to settle and exist in a way they knew, which [was] in their culture [and] their language, and they saw a lot of struggle. They maintained their identity and culture, but they also built a city and built an industry.”