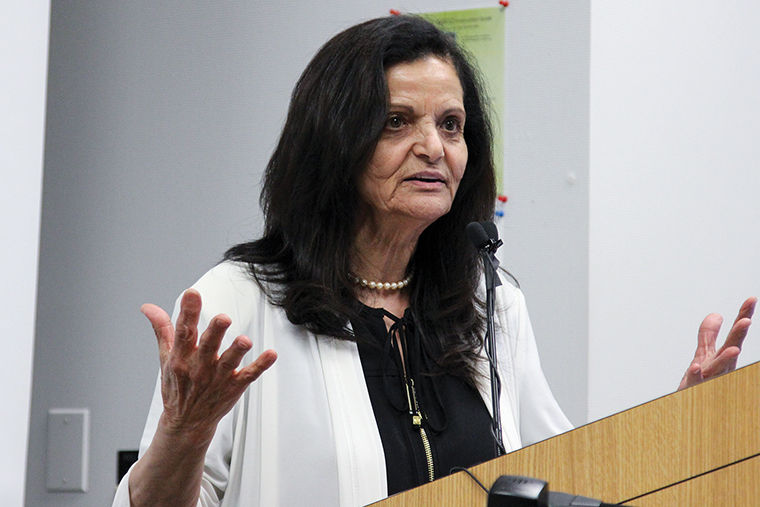 Rasmea Odeh, a panelist at “Existing and Resisting: Palestinian Women Tell Their Stories,”told the audience about her desire to inspire change.

The struggles and tribulations Palestinian women face during the occupation of the Palestinian territories were at the forefront of the discussion as a panel of four women shared personal narratives at an event called “Existing and Resisting: Palestinian Women Tell Their Stories.”

Hosted by Columbia’s chapter of Students for Justice in Palestine on May 6 at Collins Hall in the 624 S. Michigan Ave. Building, the panel consisted of Rasmea Odeh, an associate director of the American-Arab action network, Faten Dabis, an attorney passionate about civil rights and human justice, Rania Salem, a sophomore at Loyola University and Sahar Halabi, a physician who works with various Palestinian organizations.

“We put together this event because there are a lot of great speakers that talk on behalf of Palestine and the occupation, but we don’t usually have a platform for just all women,” said Dania Mukahhal, president of SJP and senior graphic design major. “This is a great opportunity to hear from amazing, successful women.”

Dabis is a member of the coordinating committee of the Arab-Jewish partnership for peace and justice in the Middle East and a University of Phoenix instructor in business, law, philosophy and humanities. She said when she worked in corporate America, her heritage made people uncomfortable. She added that she sees this same idea of dehumanization everywhere, for people of all colors.

“It is the same system,” Dabis said. “[The American Government is] seeking to dehumanize us all in the name of profit.”

She recalls crossing over from Jordan to visit her grandfather’s village in Palestine when she was little. She said a normally two-hour trip would take 10 hours because of the harassment and strip searches her family received from Israeli soldiers at the broader.

Salem, who was recently elected secretary of Loyola’s SJP, read a poem recounting the violence and hardships she battled in Palestine. She remembers bombings, feeling trapped and a gun against her skull, but also remembers hope, strength and “breaking open those chains.”

She said an English professor once told her Palestinian issues were not important and recalls her father being held in Israeli prison for 48 days and being tortured into a confession.

This motivated Salem to start Loyola’s Divestment campaign, which calls for removing investment funds from corporations “that are complicit in and which profit from the occupation and oppression of the Palestinian people,” she said. More than 20 student and corporate organizations signed on and the movement has become successful, she added.

“All my life I was alone in this,” Salem said. “I had to deal with this because my friends didn’t understand. No one understood. To be a Palestinian means you are brave, you are strong and nothing could tear you down.”

Halabi, who currently volunteers with a Chicago-based organization to support victims of torture, went back to Palestine in 2009 to learn about her heritage. She wanted to find the grounds of her mother’s old house, which was later turned into a city hall when Israelis took over, and then demolished.

“Like trees that have their [roots] in the Earth, so do houses,” Halabi said. “You can demolish a house, you are not going to demolish the foundation. The foundations, just like a society, will remain hidden under the surface of the Earth.”

She said she was brought to tears when she discovered the red and blue tile of her mother’s house lying in the dirt. She then held the little fragments of the tiles in her hands recounting what it must have been like for her mother to leave everything behind.

“The saying ‘the old will die and the young will forget,’ well nonetheless it is true, the old did die, but the young did not forget,” Halabi said.

Odeh, who holds a master’s degree in criminal justice and who has been a community organizer for the past 10 years, said she came to support the Palestinian women who constantly stand up for their rights and for justice. She grew up in the war zone and said this is something her people have been struggling with for close to 70 years.

“It’s my experience. It’s my blood. It’s our blood,” Odeh said. “Yes, I am an American citizen, but also I am a Palestinian. I can’t close my eyes about my roots, about my pain that all my people go through. It’s part of my life. It’s part of my personality.”

Odeh is currently fighting deportation to Jordan amidst a legal battle stemming from allegations that she omitted her conviction in a fatal bombing in Israel in 1969 on immigration papers. Odeh claims that she confessed to the crimes after being tortured by Israeli soldiers.

Iymen Chehade, SJP’s faculty advisor and an adjunct professor in the Humanities, History & Social Sciences Department, said the panel helped humanize the Palestinian issue of what happened 67 years ago in Palestine and the same struggle that continues today.