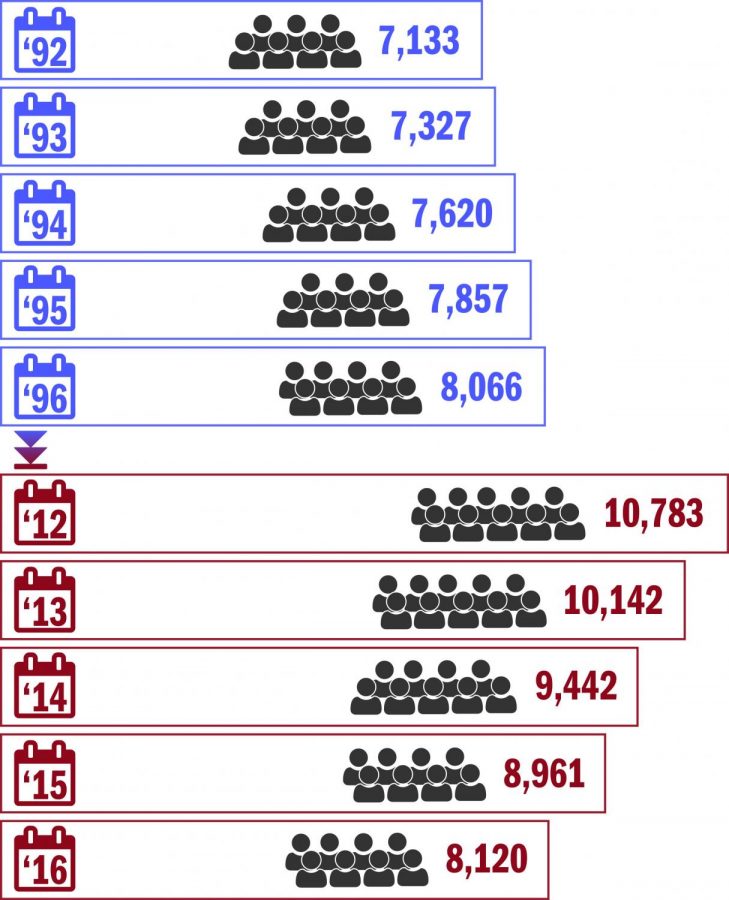 Final enrollment numbers for the Fall 2016 Semester published on the Office of Institutional Effectiveness’ website revealed a 9.4 percent decrease in last year’s total—down from 8,961 students to 8,120 students.

Final enrollment numbers for the Fall 2016 Semester published on the Office of Institutional Effectiveness’ website revealed a 9.4 percent decrease in last year’s total—down from 8,961 students to 8,120 students. Enrollment has not been as low in two decades, when the college reported 8,066 students in 1996, according to the College Archives. The college reached its highest point in 2008 with 12,464 students and has decreased annually since then.

Senior Vice President and Provost Stan Wearden, who, following the Fall 2015 Semester said the college would do anything to prevent further decline, as reported Sept. 28, 2015, by The Chronicle, said that Columbia’s administrators were not surprised by the latest numbers because it was clear the college would not meet one of its projected figures—8,300 students—by early summer.

“We were ready for [these numbers] coming into the Fall [2016 Semester],” Wearden said.

President and CEO Kwang-Wu Kim deferred comment on the figures’ release, and the college’s News Office said he would not speak on the enrollment until the fiscal year budget is finalized.

According to Wearden, there are several variables that contributed to the drop, including students’ financial limitations and the college’s “perceived reputation.”

from prospective students. For this year, he cited Illinois’ budget impasse, which stopped Monetary Award Program grant distribution, as a potential reason for Chicago-wide enrollment decline but said he is not sure if there are any  Columbia-related reasons for the 2016 decline.

“It’s hard to say… It’s not that there has been something bad that happened here, Wearden said.

According to Wearden, even if the administration did nothing to increase enrollment, based on state and population trends, enrollment would level off after one more year of decline. Wearden also anticipated a gradual increase in retention throughout upcoming years, making the college’s statistics more appealing to prospective students’ parents.

He added that as the number of new students increases, enrollment statistics will look more favorable.

“Two or three years of increasing the number of new students is going to start to move the entire enrollment upward as well,” Wearden said.

He said there are no additional budget cuts, including layoffs, scheduled currently, and the college will monitor the budget over the course of the year to find more effective areas to cut. While Wearden did not immediately address whether previous enrollment-related cuts could be a reason for decline, he said retention increased 1.5 percent—from 69 percent in 2015 to 70.5 percent in 2016.

Wearden said the retention increase is an improvement and an advance toward the goal of approximately 80 percent.

“As you cut too deeply, it can cut into your ability to grow in the future… [The board of trustees and administrators] are well aware of my concerns about this too and supportive of making sure we protect the institution, so we do have the resources we need to continue to grow in the future,” Wearden said.

The college’s budget for fiscal year 2016 was not made available to The Chronicle as of press time because it is still in the process of being finalized, according to college spokeswoman Cara Birch.

Wearden said cuts were made over the summer, which included several staff layoffs, because the college anticipated enrollment under its target.

As reported Sept. 26 by The Chronicle, Wearden said the Enrollment Management office has developed a new recruitment process, which will begin this year.

Meece added that the second strategy, which he referred to as “building the college’s funnel,” involves buying prospective students’ information such as names, addresses, phone numbers, emails and major interests, from vendors like ACT and College Board in an effort to reach out, engage and  maintain communication with  prospective students.

“Those are the areas we are changing,” Meece said. “[The planning and research] has actually been going on for the last year and a half.”

Tim Cozzens, chair of the Design Department, attributed his department’s drop to the high number of students who have graduated or dropped out and lower freshman class sizes.

Cozzens said his department experienced budget cuts that closed underused student spaces, and the department identified alternative spaces for students. He added that he has not been asked to make any other budget cuts in the near future.

Cozzens added that he expects his department enrollment figures to stabilize next year and does not expect either a dramatic increase or decrease.

Jeff Schiff, chair of the Fashion Studies Department, declined to comment on his department’s enrollment drop. Mary Filice, interim chair of the Business & Entrepreneurship Department, could not be reached for comment as of press time.

Meece said he does not think any college is ever prepared for these  types of numbers, but fewer students attending in-state institutions is one of the main reasons for the overall enrollment drop. He said he predicted an increase in international and transfer students, which Meece said will boost enrollment in coming years.

“I see us increasing both recruitment as well as retention numbers,” Meece said. “I’m excited about the changes we’ve got coming up and the direction and the kind of numbers we’re going to be looking at next year.”

Students with no department—which includes undecided, at-large or interdisciplinary students—increased 58 percent by 90 students.

“This department, for many years, has been ahead of what’s going on in our field,” Sheridan said. “We have seen trends and ways to respond to those trends ahead of most of the other main schools.”

Sheridan declined to comment on how the enrollment drop in other departments can affect the college.

Peter Cook, chair of the American Sign Language-English Interpretation Department, said an increase of transfer students and those interested in obtaining a second degree, the department’s unique courses, the Silent Retreat event and faculty’s exposure in conferences and workshops were all contributing factors to its enrollment increase.

Wearden emphasized the importance for faculty, staff and students to await the results of the Strategic Plan’s implementation and its impact on enrollment increase.

“Keep the faith,” Wearden said. “We have a great Strategic Plan [with] the right approach. It takes a little bit of time. You have to keep the faith. You can get scared, or you can get busy.”

Through the News Office, Wearden corrected the number of prospective students the college would be reaching out to in its new enrollment plan.

Wearden said the college plans to combat enrollment decline by reaching out to 16,000 prospective students during 2016, which was later corrected to 60,000-80,000.