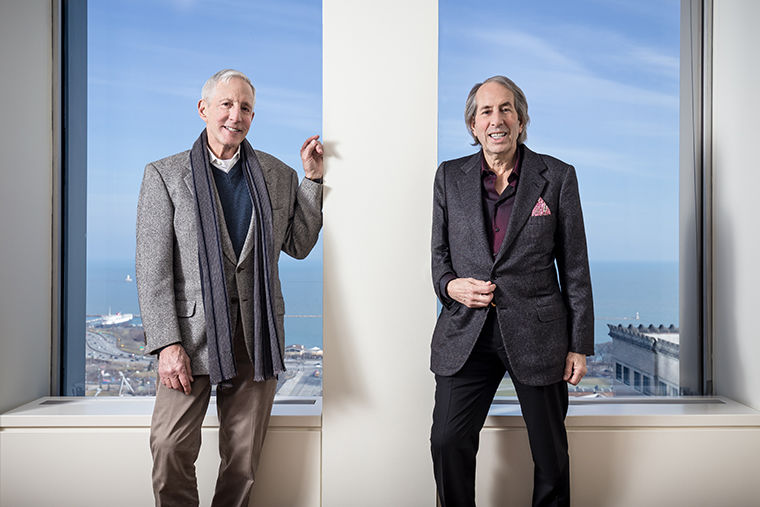 Buzz (left) and Biff Ruttenberg said their donation is in support of an insitution their parents created and will allow MoCP to obtain more established artists.

The Museum of Contemporary Photography received a $1 million donation from the David C. and Sarajean Ruttenberg Foundation Feb. 1, the largest donation the museum has ever seen.

The Foundation, 1101 W. Monroe St., is an organization that provides grants to qualifying organizations dedicated to the exhibition and/or collection of fine arts in Chicago and surrounding Midwest cities.

Biff Ruttenberg, director of the David C. and Sarajean Arts Foundation, said his father David C. Ruttenberg was one of the founders of MoCP, and the donation is a tribute to that creation. Biff and his brother Buzz have continued the foundation after their parents’ death.

“What my brother and I have done is to continue to support an institution that was important to our parents, and for which they get some credit for [having] founding it,” Biff Ruttenberg said. “It’s exciting. My dad and mother would be extraordinarily proud of the legacy they helped to create.”

Natasha Egan, executive director at MoCP, located in the 600 S. Michigan Ave. Building, said the museum is thrilled to have received such a large contribution.

“This is the largest gift given to the museum in our history, so it’s an empowering feeling to receive the funds,” Egan said. “For us, it’s a testament to the good work we’ve done all these years.”

This contribution comes shortly after another $1 million donation to the college by the Efroymson Fund in support of the new student center’s construction, as reported Jan. 27 by The Chronicle.

Egan said this contribution will specifically go toward the funding of new exhibitions and allow them to add more work from established artists.

“We already have a collection of about nearly 15,000 works, and this gives us a way to collect slightly more established artists than we have been collecting in the past,” Egan said. “One of our missions is to collect emerging artists, but these funds [will] allow us to reach some artists who are actually on our wish list that have been unattainable before.”

Biff Ruttenberg echoed Egan’s comment regarding what a gift of this size will allow the museum to attain.

“The majority of the funds will support the acquisition of annually a limited number of pieces of photography, so the MoCP can build the stature of its collection,” Biff Ruttenberg said. “We wanted to give MoCP the ability to acquire more important works, and spend more money on any given piece than they have historically been able to in the past.”

Buzz Ruttenberg, vice president and secretary of the Foundation, said he and his brother had been discussing the possibility of a donation of this size for several years and, at their age,  decided to donate to ensure the continuation of the museum.

Buzz Ruttenberg said even though the donation is generous, it is not the amount that matters.

“It’s not about the size of the gift as it is the ability of the museum to be able to carry on with the type of activity that Dad loved,” Buzz Ruttenberg said.

Biff Ruttenberg said ultimately the gift was given to honor their parents’ contributions to Chicago’s art world.