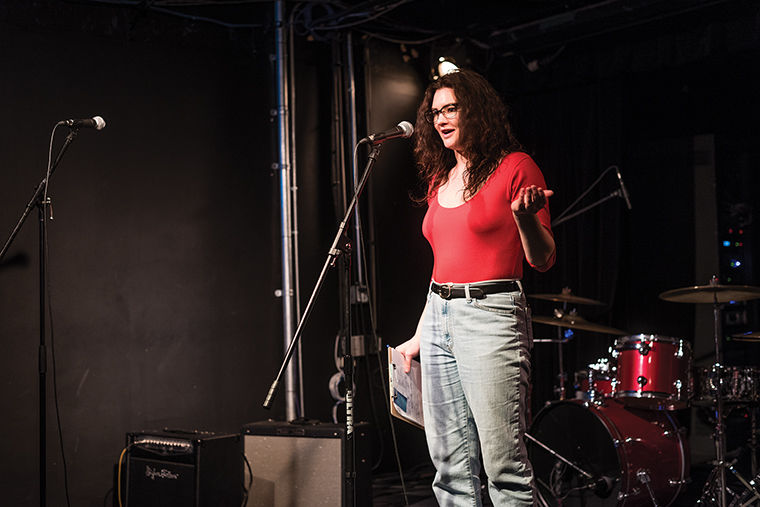 Stephanie Hanson Production co-director of Tedx Columbia College Chicago and Senior Business and Entrepreneurship  major, thanks the people that came in support of the event at 623 S. Michigan Ave. Mar 8.

Columbia’s third TEDx conference will feature 10 individuals from various backgrounds speaking about the theme of “evoking presence” in their lives and careers during the annual event scheduled for April 1.

Since 2015, Columbia’s chapter of TEDx, modeled after but separate from TED Talks, offers a day of speeches on a particular theme.

“We just talked about different themes and visuals and all just came to this idea of each of our presences within the room and then we were like, ‘Well, what about the whole idea of evoking presence within each other?’” Maahs said.

Officially announced during the March 8 sneak-peek event held at the HAUS, 623 S. Wabash Ave., the speakers for this year’s conference at the Music Center, 1014 S. Michigan Ave., include Humanities,

According to TEDx President and senior business and entrepreneurship major Tess Carmody, the conference has three parts: Internal Presence, Shining Your Own Light and Helping Others’ Lights Shine On.

“The speakers are all focusing their presence within the community [and] what they’ve learned, so through their talks, they’re going to be trying to evoke those thoughts and ideals they’ve had throughout their life,” Carmody said.

Freitas Johnson, who will be speaking in the Helping Others’ Lights Shine On section, said her speech will trace the steps she took in her life to build her public art project advocating for community engagement for peace and nonviolence, Ten Thousand Ripples.

“It starts with my childhood and the small steps taken at that time, which had such a presence in the bigger picture, my life now and the public art project,” Johnson said.

Kim, who will be speaking in the Internal Presence section, said the theme means living an honest life. He is most recently known for leaving his dream job as an actor and comedian at The Second City because of hate speech and verbal harassment he experienced while performing, as discussed in an Oct. 26, 2016, Chicago Magazine essay.

“[My speech is] going to be very autobiographical,” Kim said. “I will be hitting up on my personal story and how I have used my comedy to evoke a more honest and powerful truth within myself.”

Although Kim has performed in public, he said his speaking experience has never been in a noncomedic environment. He is nervous about his speech, but said he is excited to hear from the other speakers and hopes audience members feel empowered by his talk.

“I hope people take away an empowerment of themselves and a excitement to apply that to themselves and the world around them,” Kim said. “We’re living in such a troubled time right now, so I’m hoping my TEDx will help inspire people to lead a more powerful life through vulnerability.”

Bachor, speaking in the Shine Your Own Light section, said he felt honored to be a part of the conference and jumped at the opportunity, although it will be his first time doing a TED talk. He added that his speech will discuss his experiences of feeling held back because of his worry of what others would think.

“[The theme] strikes home about how I’ve struggled through the years in terms of taking risks and being skittish about doing stuff that might be out of the norm,” Bachor said. “Hopefully, folks that go to this series will be a little more emboldened to pursue what they want without worrying about any kind of baggage from what other people might think.”

Maahs said she hopes those who attend the April 1 event will be influenced by the talks and the speakers, something she noticed during last year’s conference as well.

“We just hope that they leave feeling inspired with one new idea, or realization or view on the world from seeing at least one speaker [and] they just find that connection,” Maahs said.