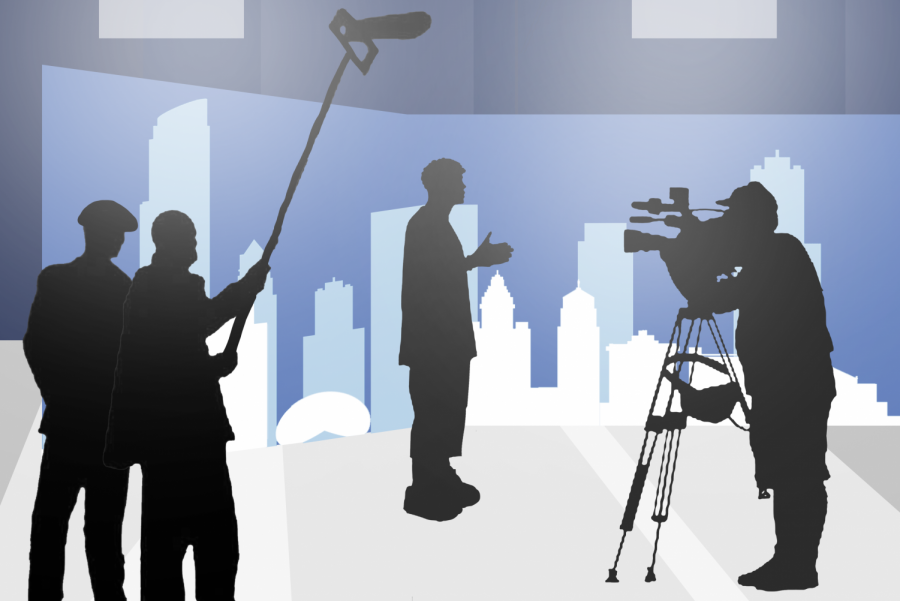 By Ryan Rosenberger and Noah Jennings

The Cinema and Television Arts Department has been facing criticism this semester due to administrative decisions that some students perceive as detrimental to their education.

While adapting to COVID-19 safety protocols and developing its curriculum, the CTVA Department has announced the upcoming removal of 16 mm and 35 mm film instruction from classes and has banned location film shoots.

The changes have elicited distressed responses from students and industry professionals.
Elimination of 16 mm and 35 mm film
One of the reasons junior cinematography major Kelly McElligott decided to attend Columbia was for the opportunity to work with film. Columbia was one of the few colleges in the U.S. that offered this option, but now it will no longer be provided.

Celluloid film, or 16 mm and 35 mm film, are sizes of film that are used in order to record a production. The film is stored in a roll of frames that can vary in size. Each frame contains an image so that when scrolled through the roll rapidly, a motion picture is seen. This is considered the traditional way to film, but over time, more digital options have become available.

“I feel like stuff is being taken away that was promised to us,” said McElligott, a junior cinematography student. “I chose this school because of the amount of resources and all the equipment—including film cameras—because I know a lot of schools don’t teach film anymore. I don’t see anything positive coming out of this [decision].”

In a Sept. 14 email to cinematography students in the bachelor of fine arts program, Thelma Vickroy, chair of the Cinema and Television Arts Department, said the department would phase out the instruction of cinematography on 16 mm and 35 mm film starting in the Fall 2021 semester in order to focus on digital mediums.

The college announced on Sept. 8 that Vickroy would replace former interim chair and current associate professor Eric Scholl as head of the department.

“The department is adopting a comprehensive digital cinematography platform to align with current industry practice and to better position our students for careers in the field,” Vickroy said in her email. “While we understand this changeover may be upsetting to some of our students who still favor shooting on film, it is a necessary change we must face in today’s entertainment industry environment.”

But the decision was made without input from current students.

Former Columbia cinematography student John Jadkowski, who is now a cinematographer specializing in projects on film, said current students contacted him after receiving Vickroy’s email because they were “heartbroken” and hoped he would be able to help them overturn the decision.

Jadkowski left Columbia after the Spring 2019 semester to have time to work professionally as a cinematographer. Some of his former classmates, who are still students at Columbia, turned to him to do something to try and remedy the situation because of the name he has built in the cinematography community.

Jadkowski said he was upset by the news and that shooting on film is too important to students for it to be removed.

“Columbia is known and acclaimed for its ability to teach cinematography students on 35 mm and 16 mm film and to give students a chance to shoot projects on those formats,” Jadkowski said. “The reasoning the [administration] gave for eliminating it from the program is a misunderstanding of where the industry is.”

Jadkowski, along with former cinematography student KiKi Lam and current cinematography students Camryn Tabiola and Thea Kinner, created a petition on Oct. 18 through Change.org asking the department to reverse its decision. As of publication, the petition has more than 1,700 of the 2,500 desired signatures.

The petition also grabbed the attention of award-winning and Emmy-nominated cinematographer and 1980 Columbia alum Michael Goi, who shared a video addressing Columbia’s administration, requesting it reconsider.

Known for his work on shows like “American Horror Story” and “Glee,” Goi said his experience with film at Columbia is what prepared him for his future success.

“Everything that I did on ‘American Horror Story’ during the five years I was the cinematographer for that show was based on the capabilities that I had to create entirely different looks by shooting on film,” Goi said in the video. “It’s vital to keep an education in film in your curriculum.”

In a Tuesday, Nov. 30 email to the Chronicle, Vickroy said CTVA faculty have reshaped the curriculum to integrate cinema and television together, but also to reflect modern industry practices.

“In moving the curriculum forward with completing the integration of the study of both film and television, along with developing the curriculum around the new technologies, new tools were needed to make this transition possible,” Vickroy said. “We are proud that we have invested in these areas to keep our program current and relevant.”

Multiple follow-up emails soliciting Vickroy’s reaction to the petition were not returned.
Banning of location shoots
Students have also expressed dismay over the recent decision to ban location film shoots for “Directing III” projects due to COVID-19 restrictions and safety protocols.

Gerrit Fahr, a senior cinematography major who is currently in the “Directing III” program, said his professor informed him about the decision during class on Oct. 15.

A day later, Fahr started a coalition composed of more than 100 CTVA students, which they are calling “Filmmakers for Fairness,” to work with the department chair and administrators to reverse the change, he said.

Fahr said Filmmakers for Fairness met with Vickroy for a Zoom town hall meeting on Oct. 26, where Vickroy said she would take student concerns to college administrators.

On Nov. 3, after Vickroy met with administrators, the CTVA Department announced new production guidelines, which banned all off-campus shoots and only allowed approved productions to shoot at the Media Production Center, 1600 S. State St., or the TV Studio, 600 S. Michigan Ave.

Prior to the meeting, Filmmakers for Fairness provided Vickroy with a dossier which listed COVID-19 policies that have been enforced on other independent sets in an effort to demonstrate that they would take the pandemic seriously when shooting on location.

These policies, which include daily health screenings, mandatory testing and an on-site COVID-19 compliance officer, are based on industry-standard practices, Fahr said.

On the sets of previous productions that took place during the pandemic with alums and current students, like the TV show “Bookstore” shot in September, no visitors were allowed on set and personal protective equipment was provided daily for everyone.

Fahr said Jacob Bell, a 2019 alum who was the first assistant director for the TV show, also served as a COVID-19 compliance officer for the set, ensuring all guidelines were followed.

“[These guidelines] are what the industry is going off of all across the United States,” Fahr said. “These are guidelines Columbia students could adhere to. They make it possible to shoot—that’s the whole point of them.”

Nathan Bakkum, senior associate provost, said location shoots have been canceled because of the college’s inability to have oversight on how students follow guidelines with the shoots being held off-campus.

Safety is the college’s top priority, he said.

“Film productions require a complex choreography of people on screen and behind the camera, and our ability to ensure that all productions execute that choreography safely requires us to limit the locations where students can film,” Bakkum said in a Nov. 30 email to the Chronicle.

This was a joint decision from the Office of the Provost, the School of Media Arts and the Cinema and Television Arts Department, Bakkum said.

As a result of the tightened restrictions, every student in “Directing III” has pulled their individual project from the program and will be shooting independently, Fahr said.

“These [restrictions] are debilitating to the integrity of film,” Fahr said. “[Columbia is] just covering it up to say, ‘This is how we’re keeping everybody safe,’ … but they’re only saying that to cover up the fact that these rules are purely just so they won’t get sued.”

Tom Fraterrigo, professor of instruction in the CTVA department, confirmed in a Dec. 3 email to the Chronicle that all six “Directing lll” students pulled their projects from the program and will be shooting independently over the course of the spring and summer semesters.

Fraterrigo said he does not think the quality of these projects will be compromised by working outside of the college.

“I have great confidence in the foundation we built this semester and the maximum effort the students put into the process,” Fraterrigo said. “Of course I’m disappointed that I will not be directly involved in the spring, but I would hope that the prep work we did this semester would leave a hovering presence of my nagging voice in their heads throughout production.”

Fraterrigo said that the students who pulled their “Directing lll” projects from the program “received advising on course selections” that would ensure they would compete their degree requirements and graduate on time.

“This has been a priority going back to last March when we had to pivot to remote instruction,” Fraterrigo said.

Fahr said because the project he was working on got pulled from the program, he changed his degree from a BFA to a bachelor of arts in order to graduate sooner.

Aside from the inherent risks that come with the pandemic, Fahr said having to build sets from scratch offers more difficulties for students.

If someone’s story takes place in three different locations, it is “almost impossible” to build that many sets for multiple reasons, the largest being budgeting, Fahr said.

He said most “Directing lll” filmmakers raise around $4,000-5,000 for their films through crowdsourcing and that is not “nearly enough” to build multiple sets.

But Adam Jones, associate professor of instruction and cinematography coordinator in the CTVA Department, said the stage at the MPC is “well-outfitted” for shooting films.

“It’s the most professional stage at a school that I know of,” Jones said. “It has set building capacities in the production design shop, a production design studio where they can paint and erect sets and then bring them into the big stage at the MPC.”

Cooper Haaland, a junior cinema arts and science major, said he decided to pull his project from the program and shoot independently in early November because of how restrictive the guidelines are and felt relief in doing so.

“The sheer amount of uncertainty and lack of clarity that the administration has had with its students this semester has been astounding,” Haaland said. “There was never a certain answer all semester … it was holding us back.”

Sydney Gilliam, a senior filmmaking major who also decided to go independent with her project on Nov. 3, said one of the most challenging aspects in doing so will be the lack of faculty guidance and access to checking out school camera equipment for her project.

Despite being upset initially, Gilliam said she is happy about her decision to go independent and is still on track to graduate this month.

“After talking to my director of photography and my production designers, we feel like a weight has been lifted off our shoulders on the creative freedom side,” Gilliam said.

The film program has changed drastically since he arrived at Columbia in the Fall 2018 semester, Fahr said.

“Columbia is not the same school as when I got here,” he said. “I’m very fortunate for the time I did have here when it really felt like a community.”