Competitors itching to win the beard and moustache competition 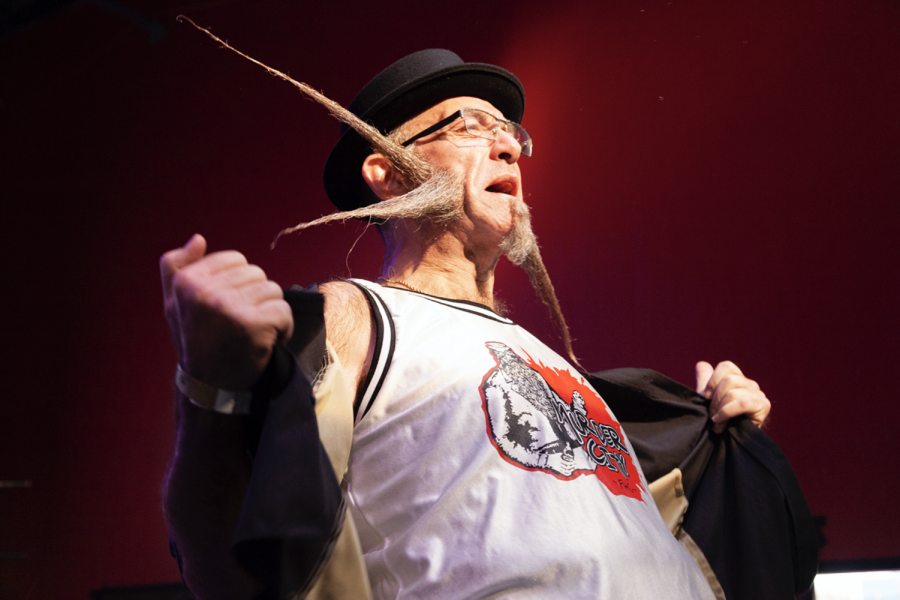 El Chapo holds back his jacket to reveal his Detroit pride while competing in the partial beard freestyle category.

Call it the face-off of the facial hair enthusiasts. Competitors and spectators from all over the country came to Tinley Park for the National Beard and Moustache Championship held at the 350 Brewing Company Insanity Factory on Saturday, Nov. 9.

Many participants in the competition, which was presented by Remington Beard Boss, paired their facial hair with a wide array of creative costumes.

“I meet new people at every one of these,” said Ryan Lammey, one of Remington’s four facial hair aficionados called Beard Bosses, who also won second place in the national championship for natural beard 3 to 6 inches long. “We keep in touch, and it’s sort of a family reunion every time we come to the same competition.”

Crowds of people began to fill the brewery at 9:30 a.m. for the event. The championship itself didn’t start until 11 a.m., but once it began it continued late into the night.

While not watching the competition, spectators enjoyed “Abraham Lincoln” marching around with the American flag, “Charlie Chaplin” doing somersaults and a man riding a penny-farthing.

Those competing were split into 45 categories, which were divided into four main classes: moustache, partial beard, craft and full beard. Each category’s winner was determined by a group of judges comprised of former champions and facial hair experts—MJ Johnson, one of Remington’s Beard Bosses, and Will Clinger, the host of PBS’ “Wild Travels.”

The championship benefited three Tinley Park based charities: the Oscar Mike Foundation, a non-profit that supports wounded veterans; Together We Cope, an organization that works to prevent homelessness in Chicago’s south suburbs; and the People’s Animal Welfare Society of Tinley Park, a no-kill shelter that has helped more than 1,000 pets find a home in 2019.