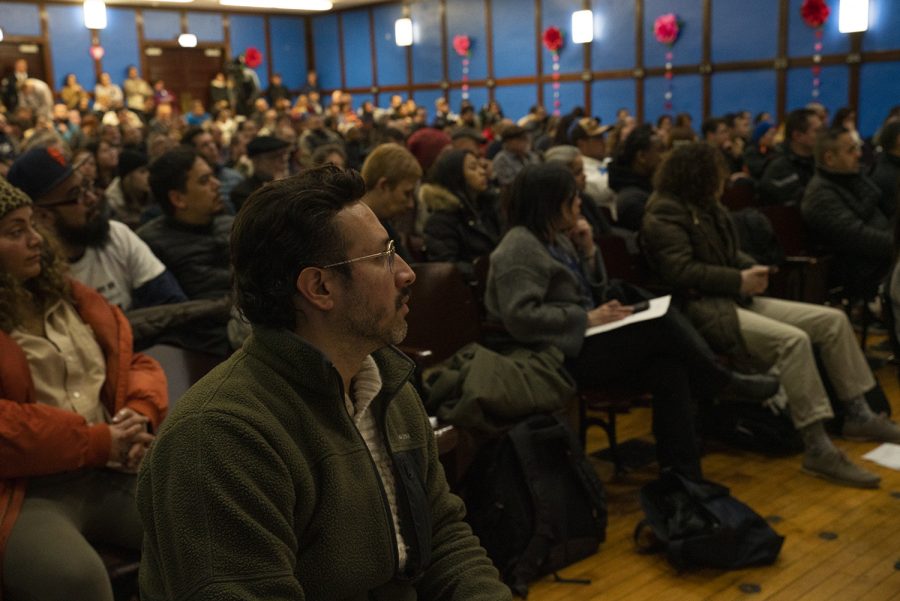 Attendees pack the auditorium of Pickard Elementary, at 2301 W. 21st Place, to hear community organizers and elected representatives address the issue of gun violence in the 25th ward.

Phrases such as “The community is not the police” and “Where is the money?” could be heard repeatedly from residents.

Ald. Byron Sigcho-Lopez (25th Ward), the alderperson representing Pilsen, held a meeting at Pickard Elementary, 2301 W. 21st Place, Thursday, Feb. 20 to create an open line of communication between public servants and citizens in a “long overdue” conversation about how to effectively address gun violence in the community.

More than 100 residents attended the meeting, largely in response to three recent shootings in Pilsen occurring on Saturday, Feb. 8; Sunday, Feb. 9; and Monday, Feb. 10, as well as a double homicide shooting in nearby Chinatown on Sunday, Feb. 9.

Among those in attendance were Chicago Police Department commanders of the Ogden (10th) and Near West (12th) districts; leaders from nonviolence groups; State Sen. Tony Muñoz (1st District); Cook County Board Commissioner Alma Anaya, who represents the 7th District, including Pilsen; as well as a mother whose 16-year-old daughter was shot and killed. Each offered their own testimony and ideas on how to work together to solve the ongoing gun violence.

“We have heard stories from people who now are moving out of our community because they don’t feel safe anymore,” Sigcho-Lopez said at the meeting. “Gun violence is the worst issue we’re [facing] today.”

Since 2014, there have been approximately 188 shootings in Pilsen alone, according to The Trace, an independent, nonprofit news organization dedicated to coverage of guns in the United States. So far in 2020, 310 people have been shot across the city, as of press time, according to a Chicago Tribune shooting database.

Junior journalism major Melanie Medrano, who was born and raised in Pilsen, said many residents have grown accustomed to witnessing and dealing with gun violence as part of their daily life.

Lucia Villarreal, a 43-year-old Pilsen resident who attended the meeting, said she has witnessed multiple shootings,  assisted in imprisoning “violent gang members” and requested more police personnel for the past 20 years—to no avail.

“My house has been shot up three to four times by stray bullets,” Villarreal said. “My daughters … know to this day how to hit the floor when gunfire erupts.”

Sigcho-Lopez said much of Pilsen’s struggle is due to inequalities and a lack of opportunity, mental healthcare, funding and programming.

Andre Rodriguez, a street outreach mentor, said he decided to focus more on Pilsen while working at New Life Centers of Chicagoland—an organization created to address issues such as youth violence, justice system involvement and unemployment. He saw a need for gang intervention, safe spaces and youth resources.

Near West District Cmdr. Stephen Chung said the 12th District is trying to make the community safer by using peace circles; teaching youth alternatives to gangs, guns and drugs; and building trust within the community through schools and organizations such as the Boys and Girls Club.

While fielding protests and complaints from frustrated attendees who felt they were not being heard, Ogden District Cmdr. Gilberto Calderon laid out the Neighborhood Policing Initiative plan, which would have officers patrol their beat on foot so they could listen more closely to residents’ safety concerns.

“If there is anybody in the audience that thinks that we as a police department do not care, you’re wrong,” Calderon said.

Attendees also posed their own ideas for solutions. One suggested residents apprehend suspected criminals on their own without relying on law enforcement, while others advocated for more funding, youth programs without cops and solidarity with other neighborhoods tackling the same problems.

Sigcho-Lopez said it is important community members listen and advocate for one another so the neighborhood’s needs are heard and proper resources are allocated.

“It’s gonna take a village,” Sigcho-Lopez said. “This is a very tough issue. We really believe that this is just the beginning of this coalition—community groups, the public officials, the commanders—[who will] join us to address this issue.”