Column: It is time to let my ‘freak flag fly’ 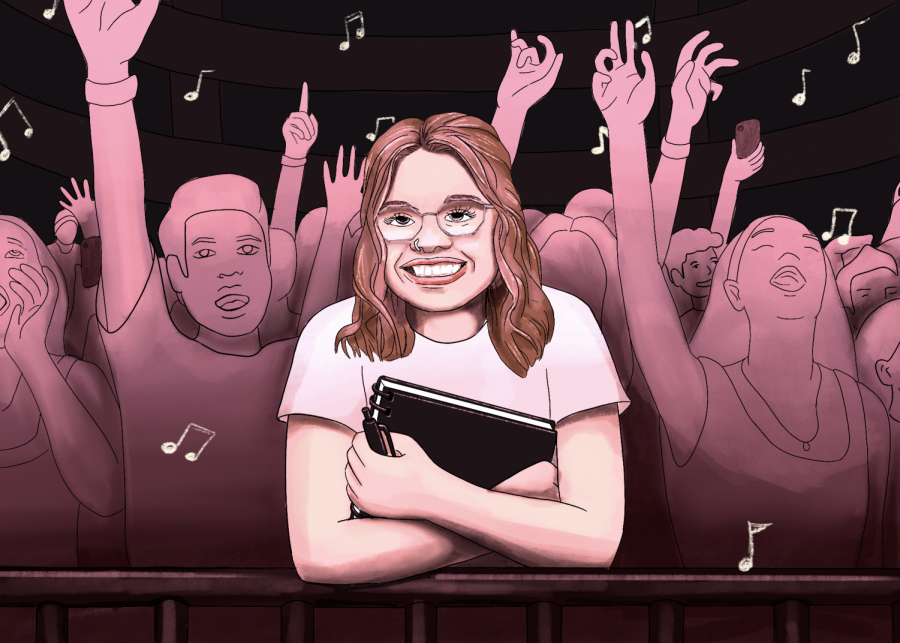 When I slid the venue security staff my folded paper press pass with shaky hands, my heart was beating rapidly as I watched them cross off my name on the official guest list.

I remember being in awe that I was let in as a member of the press, a nervous 19-year-old girl who adored music but was never given the opportunity to write about it until that moment.

I arrived early to meet up with the manager of the indie-punk group HUNNY and was taken to the Subterranean’s green room, where the group of four was lounging on the ripped black leather couches gulping down beers. My hands were so clammy, the pen nearly slipped from my grasp as the band welcomed me with open arms.

The smell of cigarettes, the effortless flow of talking shop about music while yelling over the speakers below us, and the smile plastered across my face—in that moment I thought, this is it. This is what I want to do for the rest of my life.

That was the first concert I attended as a student journalist and the first piece I wrote about music. The story was not good, and I look back at it today and cringe, thinking of how much better it would be if I had the chance to rewrite it now.

But I would never take back the experience and the thrill of it all—former Senior Video Editor Ignacio Calderon and I leaning over the balcony’s edge watching the sweaty group of people below us moshing and asking ourselves how this could possibly be our job.

That poorly written Q&A led me to more than I could have ever imagined, which is what the Chronicle experience is all about. That one concert I covered eventually led to 46 stories about music, from reviews of albums and live shows to long-form features.

This also opened the door for former photojournalist Steven Nunez and I to attend Lollapalooza in 2019 as the youngest members of the press—walking around starry-eyed the entire time. It also allowed former Director of Photography Mike Rundle and me to capture and take part in an officiated wedding at Riot Fest, while some punk band was tearing up the stage behind us.

Most of the time, the experiences I have had at the Chronicle do not even feel real. The Chronicle has allowed me to take something I love, like music, and turn it into a documentation of history. But music reporting is not the only area in which I have been able to develop.

I have been pushed out of my element at the Chronicle by reporting on stories I previously thought were too far out of my reach, including data breaches, Title IX regulations, protests surrounding mass civil unrest, faculty and staff unions and the COVID-19 pandemic.

Most of all, this publication taught me that I could be more than a reporter or writer, and that I had the ability to be an editor and guide an entire staff—which would not be possible without my right-hand, my dear friend, my co-EIC Mari Devereaux.

The thing about the Chronicle is that it is a space for trial and error and allows any person who steps through its doors to have a hand in whatever they please.

Former EIC Alexandra Yetter accepted every music pitch I threw her way and pushed me to dig deeper with everything I do; Faculty Adviser Curtis Lawrence talked through story edits with me line by line and never failed to give me the right advice; and General Manager Travis Truitt pushed me to question everything and to trust my instincts, while also geeking out with me about the Beatles on the side.

My editors team—you know who you are—have become my family and have embraced the ability to be goofy and creative, while also being determined and productive.

I came to the Chronicle as a first semester transfer student with minimal journalism experience, and I am leaving much earlier than I thought I would due to an opportunity for full-time work on the editorial team at the Chicago-based publication Luckbox Magazine while I finish my classes, which was only made possible because of the Chronicle. It is difficult to put into words how much these two years have changed everything for me, and it is even more difficult to leave a space where I have found so much purpose.

As I leave my role at the publication, I am reminded how grateful I am for finding my passion in telling diverse stories and being able to follow it into the “real world.”

As said by Jimi Hendrix in the song “If 6 was 9,” and frequently quoted by one of my many mentors at Columbia, Jim DeRogatis, it is time for me to let “my freak flag” fly.