Column: Angry filmmaker yells at cloud, and other thoughts about procrastination 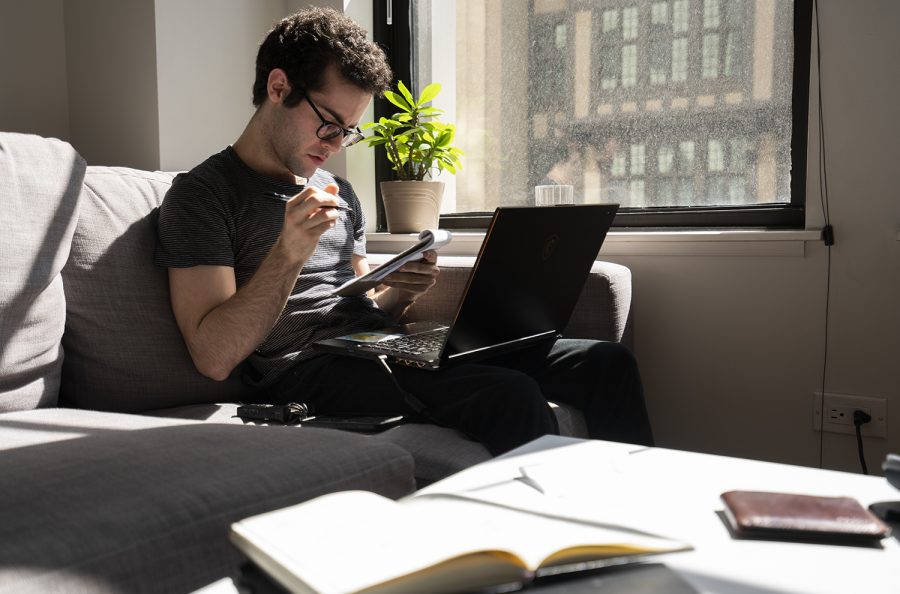 Staff Reporter Jonah Ocuto works on articles from his living room as he self-quarantines.

Throughout my self-quarantine, I’ve told myself that I need to be productive approximately 1,867,438 times, 246 of those coming from the two hours I’ve spent staring at this blank page.

I’m unable to stop my mind from thinking about how the rest of the world is dealing with this, how I should have taken it more seriously earlier on, how I wonder what my Animal Crossing villagers are up to and whether or not the air smells any different with everybody herded inside like grief-stricken cows.

What’s really odd about this game of productivity I’ve been playing is that, for some reason, whether I work or not, I feel guilty. If I don’t write, storyboard or plan, I feel like I’m wasting time; if I do pick myself up by the bootstraps and sit down to work, an hour later, I feel the exact same. This is particularly peculiar because, well, I’m a filmmaker first and a journalist second, both professions that live and die by the grind, the day-to-day push. I should, theoretically, be jumping for joy with this incredible amount of time—that rare, matchless resource—that’s been bestowed upon me. And yet, sitting in the $5 office chair Goodwill gave me before the world ended, the guilt remains.

Filmmakers are busy people—I, myself, am an overthinker and many of my peers will understand the following quite well: When the core of your medium is action, it’s hard to ignore that itch the coronavirus has magnified, the urge to shoot. This itch, unscratchable, drives a sickly need to produce, a quiet, desperate desire that I and likely every other Columbia student has grown well acquainted with.

Frankly, my work feels small knowing that hundreds of thousands of lives are currently at stake from the coronavirus. As a result, my personal productivity does not feel important.

But art is more important now than ever before as artists are a beacon of light in these dark times, and so I feel guilty for my lack of enthusiasm amid the horror.

Perhaps this explains why over these past two weeks I’ve gotten so familiar with procrastination that I’ve begun to refer to it by cute, short-hand nicknames like “Snake” and “Spizz,” or why the feature film I’ve been writing for two years now looms like a skyscraper’s shadow.

I’m currently enrolled in an independent study for said feature film, so a few days ago, I met virtually with my professor to talk about my progress. Through a screen, he asked me how I was doing, if I had returned home and, to my surprise, if I had taken a moment to take everything in.

This caught me off guard.

An hour into our meeting, we hadn’t spoken about my script once, just the state of the world, how he was adapting his classes, how we’re going to recover. When he did ask about my script, I told him that, honestly, I hadn’t made much progress in the past two weeks.

He said he hadn’t been writing either, that it’s hard to write when the world is crumbling around your cuboid studio apartment.

My professor, a yoga instructor in his free time, spoke to me about the importance of this moment, of remaining in the moment, taking time to pause with the rest of the world and look critically at who we are, how we live, what we create and what we’re doing for each other.

Frankly, he’s right. I highly doubt that the next great script or great American novel is being written right now. Currently, the world sits idle, frozen, unable to connect. For us college students, for the first time, we can’t look to our grandparents for answers. This is new to us and everybody else, and together, we’re figuring it out.

One film major I interviewed when the Chronicle broke the story of Columbia’s campus closure said something that stuck with me: He told me that it’s important to slow down, that slowing down isn’t a bad thing because film will be waiting once we recover.

So, feel free to keep your head out of your laptop, hand away from the guitar or eye from the viewfinder. There’s no shame in taking a break to feel what this incredible, unprecedented, fleeting moment in history feels like. Let’s take a step back to really see each other, hear each other, learn from each other. When we come back to the camera, the canvas, the stage or the page, what we create will only be stronger because of it. Stay sincere, and try to stay awake.