Column: A fan gets a ‘Rush’ from seeing one of her favorite groups return to the stage 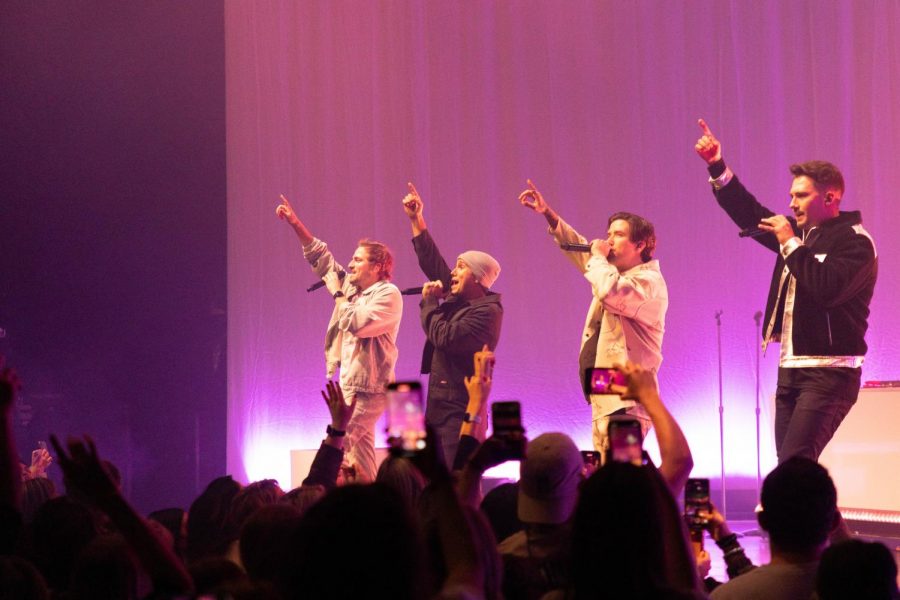 Big Time Rush reunites for a ‘Big Night’ in Chicago as they perform their first full show at the Chicago Theater on Dec. 15.

Confetti was falling at the sold-out Big Time Rush concert at the Chicago Theatre.

Before the band took the stage to perform their first full set in eight years on Wednesday, Dec. 15, they hosted a Q&A, soundcheck and meet and greet for fans who purchased VIP passes.

At the Q&A, members Logan Henderson, James Maslow, Carlos PenaVega and Kendall Schmidt discussed a variety of topics, such as the difference between Big Time Rush in the 2010s and now.

“We were under a lot of pressure,” Schmidt said. “That was something that was very noticeable. I think now as much as we still have pressure, of course, now it’s all us. It’s all under our control. We’re doing everything ourselves.”

After the Q&A, the members performed two tracks acoustically for fans during soundcheck: “Music Sounds Better With U” and “I Know You Know.”

The band members were then ushered to a corner of the theatre to meet fans and take pictures with them. I had the opportunity to share the print edition of the Chronicle’s Year In Review Issue with the band members, which included my interview with Schmidt. They gazed at the paper in excitement, getting to hold the one of the first pieces of press for the new era in their hands.

In that interview, Schmidt said the band needed “to advance” beyond the performances they gave in their original era.

They accomplished this goal masterfully during their set, which included 22 songs, mainly from the previous three albums. However, they did tease a portion of a new song set to come out in 2022 entitled “Not Giving You Up.”

Their choreography included backflips from Henderson and Maslow and even a trick where the other members launched Henderson into the air during the performance of their new single, “Call It Like I See It.” The band also made sure to include some fan favorite moves, such as the Smurf. They had moments for rehearsed choreography but also time to be playful, interacting with fans and each other.

Nobody was just watching the show — they were participating in and engaging with it as one body.

Throughout the show, fans had their hands in the air and bounced on the balls of their feet as they screamed the lyrics to classic BTR tracks, such as “Halfway There,” “Show Me” and their opener “Windows Down.”

The energy in the room was electric, and the sound was deafening at times. Even after the show ended, shrieks and shouts from fans could be heard from blocks away as they waited for the members to exit the theatre through the stage door.

To any spectator in that venue, it was clear the night was catered to Big Time Rush fans. Before the show started, members of the BTR videography team filmed fans who shared their joy at getting to attend the event. The setlist was also curated based on the songs fans wanted to hear. Multiple times leading up to the event, the band members used their social platforms to ask for song requests, and they delivered.

While it is no surprise fans were excited to see Big Time Rush again, the real joy came from seeing the constant, wide smiles on the band members’ faces throughout the performance. It was clear they were just as thrilled to be back on stage as their fans were to see them.

With so much of 2010s pop culture being resurrected in the new decade, these reunions can feel forced or unable to recapture the magic that made them so beloved. The bandmates have managed to reinvent themselves and their sound while still preserving their genuine and humble nature that allowed them to steal hearts from the very first scene of their pilot episode on Nickelodeon.

They also have a clear want and desire to be back. This is an opportunity for them to re-enter the pop culture zeitgeist in a way that is reflective of the image and sound they want to have as a band. While fans have gotten a small taste of what this may look and sound like, much is still unknown as Big Time Rush elevates themselves into this new era.

Based on the performance they gave in Chicago, there is no doubt they are going to soar past any and all expectations fans may have for them.

The night ended with bursts of confetti raining down from the ceiling as the band performed their final three tracks: “Confetti Falling,” “Big Time Rush,” and “Boyfriend.” The tiny pieces of paper showered fans from head to toe, ending an already spectacular night on a magical note.

At that moment, I couldn’t help but think: “There are no words to describe how good it is to see Big Time Rush again.”