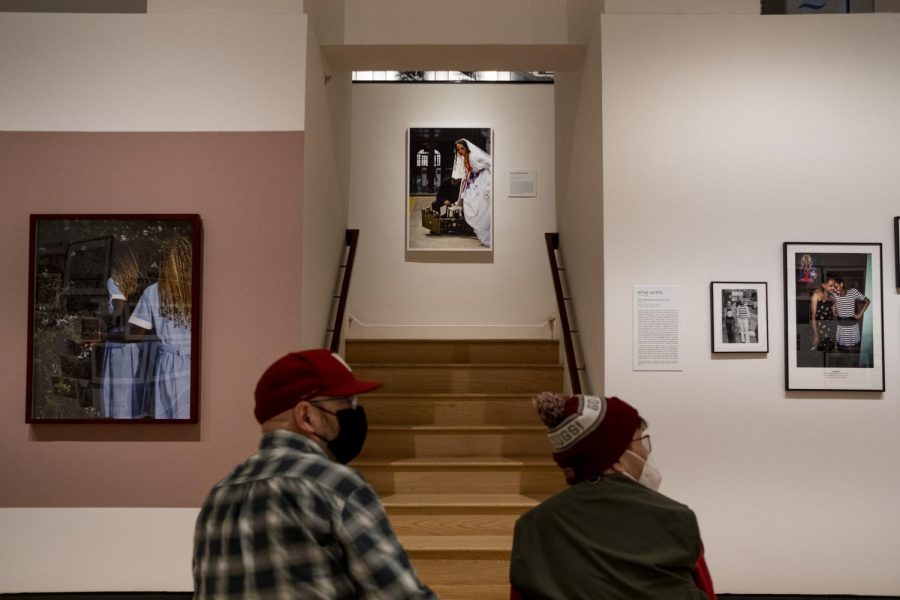 The "Beautiful Diaspora/You Are Not the Lesser Part" exhibition, containing work from 16 artists, extends to the second floor of the museum, with photographs, tapestries and multimedia work spread throughout the space.

Turkish photographer Isil Egrikavuk is the subject of her own photograph titled “Departure Time.” In it, she poses in the lobby of an empty Turkish train station. Bent slightly at the waist, she wears a traditional Turkish wedding dress and a long, curled black lock of her hair flows before her veil. She stares intently into the camera.

What makes the photo controversial is her foot, shod in a white satin pump, propped on a man’s shoeshine box as he prepares to shine her shoe. The photo is fictional. In reality, this would never happen. The scene depicts the lack of freedom many women in the exhibition’s photos experience.

Columbia’s Museum of Contemporary Photography’s current exhibition, “Beautiful Diaspora/You Are Not the Lesser Part,” focuses on the parallel relationship between artists of color and their suppressed identities.

Featured on the first floor of 600 S. Michigan Ave., the photographs of 16 artists exhibited throughout the museum represent shared experiences of various populations scattered across the planet away from their home countries.

Alexandria Brown, a photographer herself from the South Suburbs, visited the museum and talked about what stood out to her, reflecting on the themes “diaspora” and “beautiful.”

“’Diaspora’ is a word that is always on my mind,” Brown said. “It’s hard to accept the label ‘beautiful’ sometimes if you know about the history of Black Indigenous people and Black people across the world, but I think the show was able to reflect not just the passage of time and the passage of movements but also how we as Black people seem to be able to make lemonade with nothing but lemons.”

Jessica Chou’s “Suburban Chinatown” exhibit focuses on a specific Asian American community’s suburban experience in the Los Angeles area. The photos were taken in the San Gabriel Valley near Monterey Park, California, where Chou grew up, exhibiting a different perspective on the meaning of the word “suburban.”

“Looking at assimilation is almost a two-way street,” Chou said. “It’s not just that the community there adopts the larger idea of suburbia or the American dream or this idealized suburbia, absorbing it where you just wear it like a cloak. It’s more of something that influences both ways. So, you see a lot of the culture there and the community and the culture and the way they … how that sort of gets intertwined and weaved into the landscape.”

Exhibitor Sunil Gupta’s photographs illustrate the scattered communal experiences of queer cultures in social and political contexts. Gupta seeks to see not only himself in his photos but to place others into his worldview of art.

Sheridyn Villarreal, a senior art history major at Columbia, has worked as an intern at the museum for about three years. When thinking of the words “beautiful” and “diaspora,” Villarreal envisions a “constellation” and “sparkling stars” whenever they mention the title to visitors.

“So far, the reaction [to the exhibition] that I’ve witnessed firsthand has been overwhelmingly positive,” Villarreal said. “People are really excited to see representations of people who look like them, identities within their communities and nuances of identities that don’t always fit into the mainstream depictions of what it is to migrate to a given country.”

“Beautiful Diaspora/You Are Not the Lesser Part” runs through June 26, 2022, at the Museum of Contemporary Photography. Use the Harrison Street entrance.