Columbia students more likely to have final projects than exams 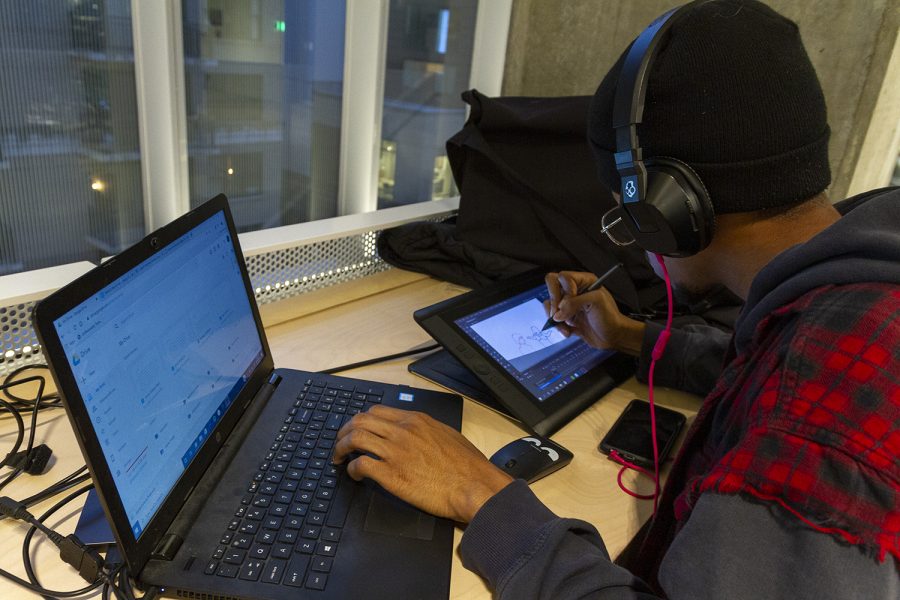 Brandon Bradley, an animation major, prepares for his final project.

Finals week at Columbia can look a lot different than other colleges. While some students may be cramming for exams, Columbia students are more likely to be finishing a portfolio project.

Project-based learning benefits students by helping them investigate and communicate to a real and complex challenge with deep and sustained attention, according to PBLWorks, a program through the Buck Institute for Education.

A 2018 research brief by PBLWorks found that students in a project-based class showed greater academic success than their traditionally-taught classmates.

Isaiah Lesley, a sophomore television major, has routinely completed final projects for classes at Columbia rather than taking final exams.

“[The projects] give me an insight into the actual working world,” Lesley said. “Most of them are additional portfolio pieces that the teachers are actually working … with me on afterward to get up and ready for the public.”

Michelle Rafacz, an associate professor in the Science and Mathematics Department, currently teaches “Animal Behavior Observational Research Methods: Honors” as well as “Evolution of Sex: Honors,” however the two classes differ in a final project or final exam.

In “Animal Behavior,” the final is a semester-long project that students begin working on during the second week of the course. Their task is to observe an animal at the Lincoln Park Zoo and then present their research at the end of the semester. On the other hand, “Evolution of Sex” has a written final exam.

For Rafacz’s “Evolution of Sex” course, she provides a study guide to prepare students for the final, and also hosts a “Jeopardy”-style game where students have a chance to win prizes. Students are also allowed to use a limited amount of handwritten notes during the actual exam.

“I don’t think [final exams] should be the be-all-end-all of how you evaluate a student at the end of a course,” Rafacz said.

“It’s usually really helpful to have a study guide,” Snyder said. “Not all professors provide them, which can sometimes be challenging.”

Snyder said hands-on exams can be more difficult depending on the subject and that she is more used to written exams. However, she said a lot can be learned from the hands-on experience of projects.

Jackson McDonald, a junior psychology major at Northern Illinois University, is preparing for all exam based finals this semester. McDonald said he feels stressed and rushed because all of his final exams are happening at the same time.

“With projects, you can get stuff out of the way beforehand, but with exams, finals week is super jam-packed with studying,” McDonald said.

Anthony Crider, a professor of astrophysics at Elon University, said there are benefits for both teachers and students when it comes to providing a more project-based final versus a written exam. The benefits include teachers learning more from their students, as well as students walking away from the course with a positive attitude and long-lasting memory of the final experience.

If professors are unable to give a hands-on final due to a conflict such as class size, he said there are still ways to improve written exams so they do not make students memorize information, but require more creative thought.

“Over time the fraction of those traditional multiple-choice exams [will] drop down,” Crider said.