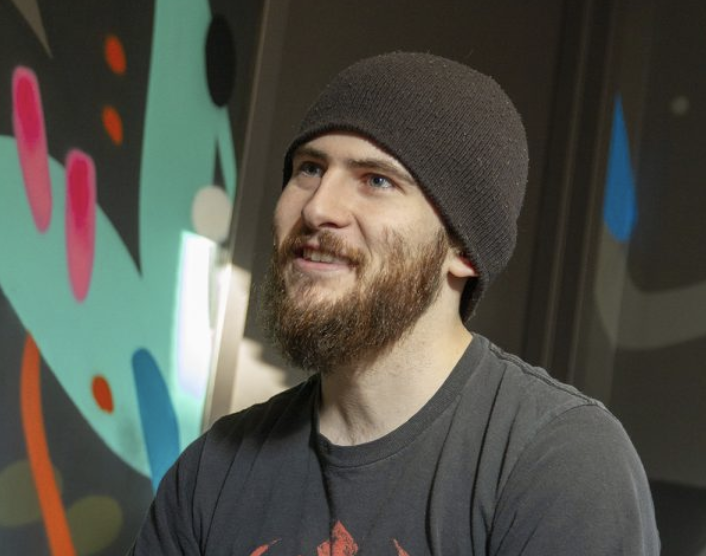 Jacob Bell was not always the film buff he is today. But that all changed after constantly watching movies in his free time during three Marine Corps deployments beginning in 2012.

It was during his deployments in Okinawa, Japan; Rota, Spain; and Jacksonville, North Carolina that he found his love for cinema, wrote his first screenplay and made his first movie during the summer of 2013 when he was home on military leave.

“‘Brothers’ was terrible but it sparked something in me that made me fall in love with making movies,” Bell said.

That spark was the groundwork that led the 28-year-old to study cinema art and science at Columbia, with a concentration in directing.

Bell was later recommended by Kevin Cooper, an associate professor in the Cinema and Television Arts Department, for the “Directing Action Scene Workshop” course, a program for advanced student filmmakers with a focus on action sequences.

“The Right Thing” follows an elderly veteran in Chicago who intervenes when he sees a woman of color being harassed by a neo-Nazi.

“The neo-Nazi is a younger and much stronger man and beats the aging veteran,” Bell said. “It’s up to the woman of color to save the day and take power back into her own hands.”

Bell’s work thrives off telling honest, character-driven stories. He derives inspiration from two films in particular: the 2017 David Leitch film “Atomic Blonde” and the 2014 Chad Stahelski film “John Wick.” He said he enjoys how raw the action is in both films because the scenes are not over-enhanced with special effects.

“If I pulled those punches back and made [‘The Right Thing’] feel softer through visual effects, it would take away from the harshness of the subject,” Bell said. “I wanted to make sure that I was true to that.”

Bell noticed when people direct action scenes they often simplify their storytelling. He said that it should be used to enhance the story instead.

“The main thing people don’t really consider when they’re thinking about action is how to be safe,” Bell said. “There’s so many moving parts and someone can easily be hurt.”

For Bell, it is the job of the director and film crew to make sure that everyone is safe so that they can tell the story they want to tell. In order to do that, he and his crew had to do extra work in planning, storyboarding and using animatics—a moving storyboard where the crew takes pictures with the talent doing the stunts to ensure safety.

Casting actors who understand the subject matter was important to him. Bell casted a real-life veteran and a woman of color for the movie’s lead roles because they would have the emotional context for the story and pull those experiences to provide real aspects for the film.

But shaping the performance of the actor who portrayed the neo-Nazi was harder for Bell to do. Every time the actor would do or say something in the script, he would apologize. Bell said it was a safe space, though.

“You need to go somewhere dark to be able to perform that,” he said.

After running a few rehearsals to get the actor there, he did a fantastic job, Bell said.

Bell and his film crew began pre-production in January and did not shoot the film until the middle of May. Production days lasted twelve hours where the crew shot with three cameras and had 25 different shots with approximately three takes. The crew finished the three-minute film on Wednesday, Dec. 11.

“As a director, I like telling human stories—stories that are about people that are honest and true,” Bell said. “I don’t think people go to the movies for a fake story; they’re going to see something they can connect to and relate to.”