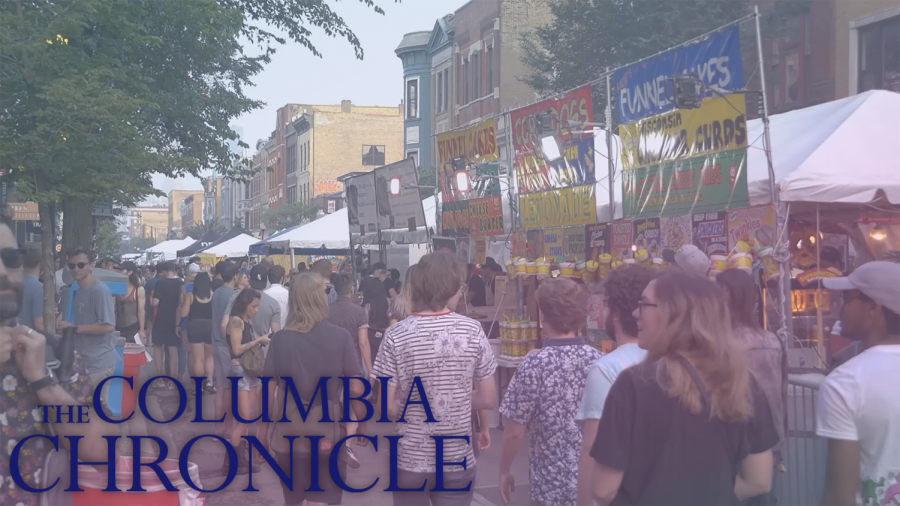 Last year Finger Beats jokingly asked her former boss at Transit Tees, who is head of the Chamber of Commerce of Wicker Park, if she could DJ at Wicker Park Fest. This year the joke turned into reality.

Wicker Park Fest is an annual street festival on Milwaukee Avenue full of music, small business vendors and tasty food. The festival on July 23-25 had free admission with a suggested $10 donation. Some of the performance artists included Columbia’s alumnus Marina City and current student Natalie Finfer, better known as the DJ Finger Beats in music circles.

“There’s so many street fairs that go on in Chicago every summer, but everyone knows about Wicker Park Fest so they must be doing something right,” Finfer said. “I like it a lot, there’s a lot of cool little areas for everyone’s local shops and [you can] find everything from dog accessories, to meditation practices, to beer. It’s a lot but it’s really cool.”

Finfer, a senior audio design and production major, got her first turntable when she was 15 years old, but started to take DJing seriously in her sophomore year in college. She said Wicker Park Fest was the first big festival with her name on it.

Her stage name came from autocorrect changing her last name to “Finger” and she has a friend who always calls her that. She wanted to change it, but the name stuck around.

Finfer is from Los Angeles but lives in Wicker Park. She said Wicker Park Fest was her first financially accessible gig where she was able to invite all of her friends, family and even her chiropractor.

“I know this street so I’m gonna feel very in my element, which is really nice,” Finfer said of Milwaukee Avenue. “I just am happy that the first festival I’m doing really anyone can see it.”

Finfer’s next stop is the Summer Smash Festival scheduled for August in Douglass Park where she will be a DJ for one of the artists, Nina Tech.

Ryan Argast, lead singer of Marina City and 2015 business and entrepreneurship alum, said Wicker Park Fest has been on the band’s bucket list for a while. Marina City formed in 2012 but the current members, except for Argast, have been in the band since 2019.

Argast said he took his parents’ advice and got a degree in a “safer” field and it ultimately helped him with his band.

“I 100% agree that my degree helped me,” Argast said. “Do you need a degree to do what I do? No … but it was way better being in the middle of everything in college, learning about it, meeting people and using what I learned in class toward the band, than me just trying to self-teach myself.”

In the early years of the band, Argast said he went to a Fall Out Boy concert in Tinley Park and the band members said statistically, one of the people out of the audience will be able to play that venue.

“I was very lucky to be able to play [Tinley Park] twice since that day and I think about that often,” Argast said. “It’s been my goal. When I saw those stages, and I saw those bands play Wicker Park Fest, it was in my head like we got to make that happen, that’s got to be a bucket list goal. I’m really excited that we’ve been able to make that happen now.”