Columbia seeks to ‘Engage’ sophomores, as many navigate their first in-person college experiences 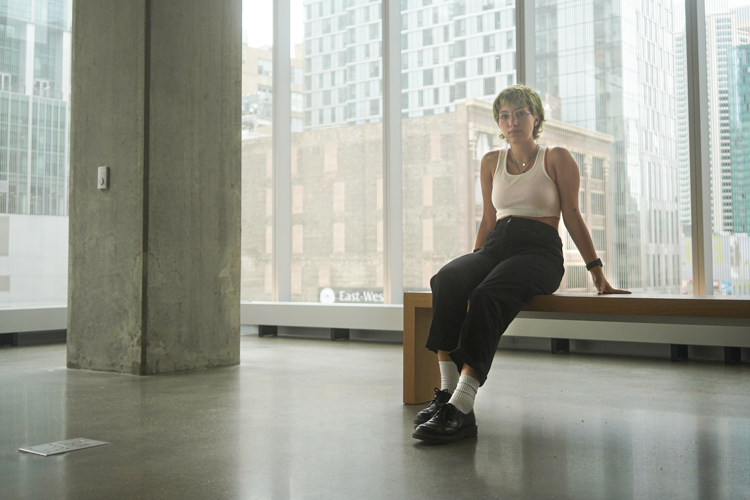 Sophomore theatre major Amina Gilbert poses for a portrait inside the Student Center, a building she has had limited access to for the past year due to the pandemic.

With many juniors and seniors back on campus for the first time since March 2020 and freshmen exploring Columbia for the first time starting with New Student Convocation, some sophomore students began the semester feeling a bit lost, disconnected and frustrated while going through their first on-campus college experience.

Last school year, most classes commenced via Zoom. Now, with in-person classes back in session and some welcoming events like New Student Convocation intended just for first-year students, some sophomores began the semester with questions and concerns regarding their place at Columbia.

Because of this, the college is offering new programs centered on the sophomore class during what is for many students their first semester of in-person classes and activities.

In an interview with the Chronicle Sept. 9, Sharon Wilson-Taylor, vice president of Student Affairs, and other members of the administration discussed the plans and events created to get sophomores caught up to other students.

“Going forward, we make sure this academic year we have special programs to focus on our sophomores,” Wilson-Taylor said. “What we do is called ‘Engage.’ It’s Engage 2.0, meaning it’s the sophomore class. … All the things that we did for the freshmen that the sophomores missed out on, we’re going to go back and do it, but add a little bit more.”

Wilson-Taylor mentioned campus resources, saying although Columbia has great resources, many students don’t know where to find them.

“We talk about the resources we have on campus. It’s great, but they don’t know where it is,” Wilson-Taylor said. “Our job is to walk them to that resource and see what is on campus. … We are going try to reengage them so they get caught up to where the freshmen are.”

Although the school has organized events such as “Sophomore Social” and “Student Center’d” — activities at the Student Center intended to aid student socialization — one student expressed her disappointment on Instagram when told by student program leaders that Convocation was focused on first-year students, implying they should attend sophomore events instead.

“I really want to be involved in extracurriculars … and I just don’t really know where to start because a lot of that information happens at Convocation,” said sophomore theatre major Amina Gilbert, who commented on the Instagram post. “I will have to put a lot more self-initiative into being involved on campus since it wasn’t explained to me as a freshman. … I just wish there was a club fair open to everybody.”

Other than being confused on where to start with coming back, Gilbert feels being a commuter student makes the level of disconnect more prominent, as her friend living in a Columbia dorm knows more about upcoming school events than she does.

“I had to hear through the grapevine that there’s huge, schoolwide activities going on. It’s hard to keep up with the opportunities,” Gilbert said.

Creative writing major Roa Khalil expressed her concerns as the school year began about coming onto campus after having her first year online as well, saying she hopes sophomores can get the introduction they need.

“We are sophomores, but we did not really get the introduction that we needed freshman year, so I feel nervous coming onto campus,” Khalil said. “I’ve visited the campus maybe twice — and this was my senior year [of high school] when everything was still open.”

Neida Aguilar, a sophomore majoring in arts management, heard about the Sophomore Social on Instagram and decided to go. According to Aguilar, the social had students coloring, playing board games, making bracelets and participating in other activities while socializing.

“A lot of people don’t know how to socialize anymore. We’re either too eager or too introverted now,” Aguilar said. “It’s different trying to get back into that.”

She was excited to go to the Sophomore Social because, as someone who was not on campus last year and is a commuting student this year, Aguilar said she feels like a freshman. She said it was hard for her to make friends, but the social helped her connect with other sophomores.

The one thing Aguilar is hoping for in the future is more events that include all students.

“It would be cool to meet people from different grades,” Aguilar said. “I don’t have any complaints. I feel like the school is doing the best they can given the circumstances.”