Columbia removes iconic ‘Moose Bubblegum Bubble’ — but not for long 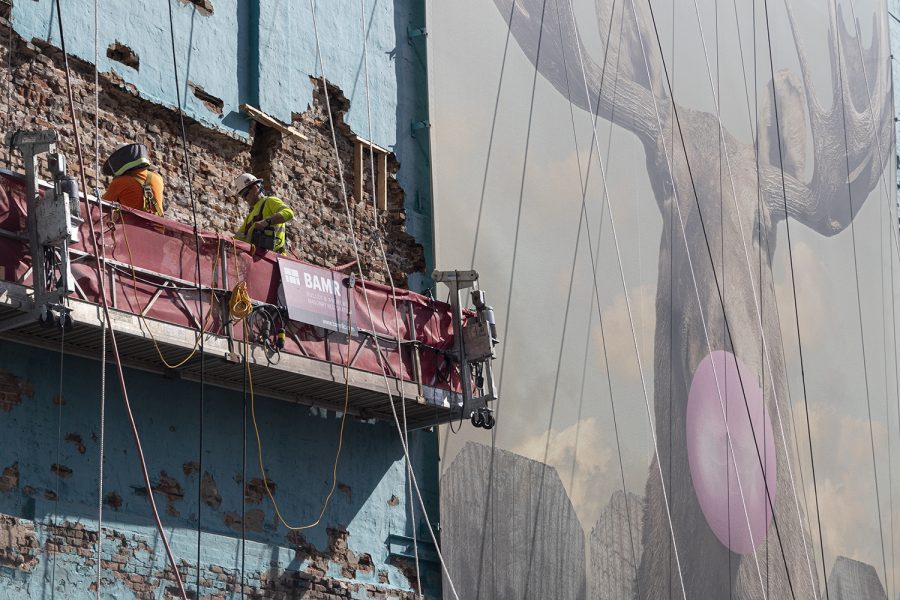 Construction crews re-point the southern brick wall of the 33 E. Ida B. Wells Drive building next to the iconic "Moose Bubblegum Bubble" banner on Tuesday, Aug. 24.

Editors’ Note: This story has been revised for clarification regarding the temporary removal of the mural, and Kari Sommers’ title has been corrected. The Chronicle regrets the error.

The bright blue, brown and pink of one of Columbia’s most iconic pieces of street art has finally met its match: the whir, hum and pounding of necessary routine maintenance.

But the Moose will return. In an Aug. 24 email to students, Columbia Facilities and Construction announced it would be temporarily removing the art piece to accommodate for construction being done to the 33 E. Ida B. Wells Drive building.

The grout of the brick wall that the art piece once laid on was eroding, according to Meg Duguid, chief curator of the Wabash Arts Corridor and director of Exhibitions at Columbia. The construction on the wall is meant to alleviate this problem, which is common in older brick buildings.

“It is really shocking to see that wall as blank as it is,” Duguid said. “It just feels like such a significant change after a lot of us haven’t been downtown regularly for a year.”

“Moose Bubblegum Bubble” was made by digital artist Jacob Watts, who graduated from Columbia in 2012. Watts made the original image by compositing several photographs he made. The bubblegum in the moose’s mouth was made digitally in Photoshop.

The massive banner was among the first two art pieces erected by the Wabash Arts Corridor, a public arts program that has covered the South Loop landscape in murals and banners like “Moose Bubblegum Bubble” since 2013.

“It’s really been a dream to have some artwork that you make just go up 50 feet on a giant building,” Watts said.

The mural was pulled down on Thursday, Aug. 26.  According to Duguid, the art piece should return by Oct. 15—the start of Columbia Weekend when many parents visit the college—so long as COVID-19 and the weather do not halt the construction process.

When it returns, the new print of the piece will include Watts’ signature.

“When it first went up in 2014, there were a lot of promises telling me that my name would be up there by it, and it just never happened,” Watts said.

According to Kari Sommers, associate dean of Student Life, “several of us worked” to add his name, but WAC was prevented from doing so “due to city policies and ordinances.”

Watts also said he was not informed by the school when his art was removed from the wall. Watts was unaware the mural had even been taken down until an interview with the Chronicle on Tuesday, Aug. 31.

According to Sommers, while the school did not inform Watts of the exact date the mural was to be taken down, she said Watts was well aware of the process for the project. “He signed a contract, received compensation, and provided a new file with his name,” Sommers said in a Sept. 8 email to the Chronicle.

In a Sept. 3 email to the Chronicle, Sommers said the school would be “in touch with [him] right away,” to provide an update on the temporary removal of the mural.

“Finally having my name on it is quite a victory, and I feel like it’s the representation that should be up there, so it’s fantastic,” Watts said. “I’m very happy that it is going back up with my name.”

WAC will also be placing a new mural entitled “On The Wings of Change” commissioned by artist Jasmina Cazacu on the same wall and a text-based mural titled “Speak Up” by Dorian Sylvain on the adjacent wall. The two new murals honor women suffragists.

The school’s Facilities and Operations Department could not yet comment on the cost of the project to repair the wall holding the mural. However, according to Duguid, the WAC has raised approximately $96,000 in outside funding for murals and wall repair at the 33 E. Ida B. Wells Drive location and for mural work at the University Center.

“While there was some irritation about not having my name up on it and stuff like that, overall I just couldn’t have been more thrilled to have it up on there,” Watts said. “I really do want to push how exciting it is. I hope it’s up there for as long as it can be before people get sick of it.”