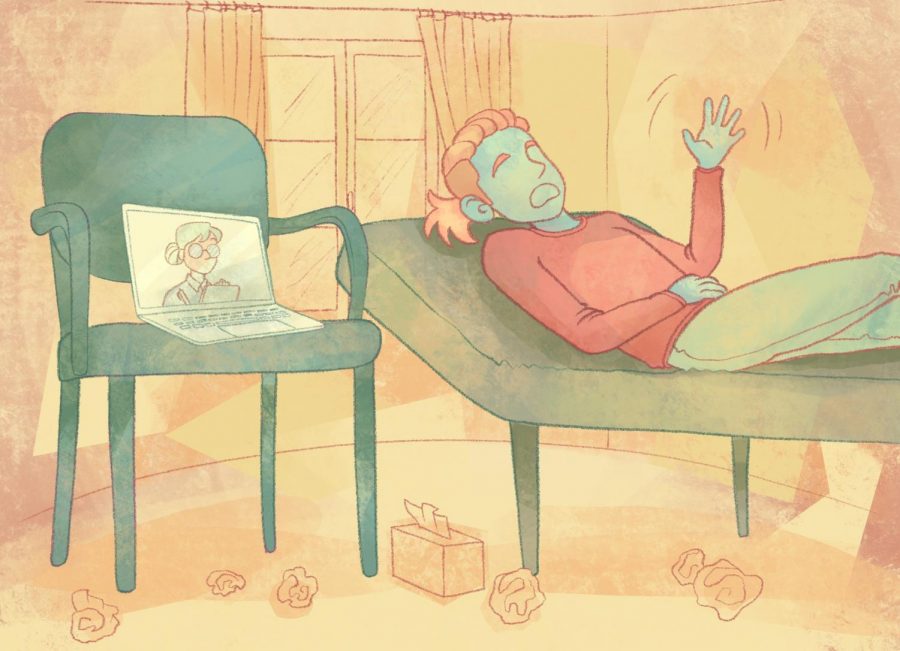 By Jonah Ocuto and Ryan Rosenberger

Kate McAlonen has struggled with depression and anxiety for years, but said she is now feeling a heightened sense of emotional and mental instability induced by the pandemic.

In an attempt to get help, McAlonen looked into Columbia’s remote Counseling Services, but was told she could not make an appointment because she was no longer residing in Illinois.

“I decided I need to find somebody out here [in Indiana] because I’d rather not wait until next semester to get Columbia’s services again,” said McAlonen, a sophomore filmmaking major.

Through Counseling Services, Columbia provides 12 individual counseling sessions per academic year, which is included in the school’s tuition and fees, to assist students in need of mental health services. For the 2019-2020 academic year, every undergraduate student paid $70 for access to the college’s Health Center. Because of the pandemic, the center’s physical location, 916 S. Wabash, has been closed since March.
Remote counseling
Thomas “Lee” Cravens, director of Student Relations, said the center has worked to address the need for mental health services by developing telebehavioral health systems to continue counseling sessions remotely, such as through phone or Zoom calls.

He said providing support is difficult if students do not have a confidential or safe space to talk.

“If somebody might be having really significant mental health concerns like maybe they’re having delusions and psychosis, I’m going to have to try to interpret that all in an audio format,” Cravens said. “Or, what if somebody is having suicidal or homicidal thoughts … and I feel like we really need to go to the hospital? Normally, if they’re in the office, we’re going to get in a taxi or call an ambulance, but [now] I can’t do that.”

There are currently five staff members in Counseling Services and three in Student Relations who are licensed to provide behavioral health services in Illinois. Graduate-level social workers and counseling interns also work in both offices.

Cravens said there have been challenges transitioning online, like having to comply with laws and licensing requirements in other states to offer services to students, as Columbia’s counselors are licensed strictly in Illinois.
Out-of-state vs. in-state
Cravens said the college is unable to provide mental health assessments for any student out of state and can only direct them to resources they can use in their area. He said students must confirm their physical location each time they call to ensure they are in-state and to reduce risk or liability.

Barry Schreier, chair for the communications committee for the Association for University and College Counseling Center Directors, said schools’ ability to offer counseling services depends entirely on the licensure laws of a given state.

Schreier said the association for counseling center directors has led the change toward telehealth, which has included “lobbying at the federal level regarding cross-state practice.” This would allow licensed health care providers, who are usually only allowed to practice in the state they are licensed in, to practice outside of state lines.

This resulted in more students receiving counseling services in the state they are from due to increased access from governors loosening cross-state practice restrictions during the pandemic, Schreier said.

But as states reopen, these temporary licenses will begin to expire, he said.
Columbia’s services
About 54% of the college’s 6,297 students are from Illinois, which would leave approximately 2,900 out-of-state and international students potentially without access to the college’s counseling services during the pandemic, depending on whether they remained in Illinois or went home, according to Institutional Effectiveness numbers.

Senior comedy writing and performance major Grace Roushdi was looking for support in managing her anxiety and post-traumatic stress disorder during the Spring semester and reached out to Counseling Services where she began meeting with a therapist.

But once campus buildings closed, she transitioned to remote counseling and met with a therapist over the phone once a week during the semester. Although Roushdi chose to meet over the phone as opposed to a video conferencing platform, she said it had its limitations.

“I’m somebody who you have to read my face when you speak to me,” Roushdi said. “I don’t always say what I mean. … It’s pushed me to be more honest with my words, but also, it makes it hard when I don’t know how to say something.”

Columbia’s Alerts system allows faculty to anonymously submit concerns about students to the Office of Student Persistence to provide support. In a May 22 email to the Chronicle, Associate Provost of Academic Services Brian Marth said a total of 513 Alerts were submitted during the Spring 2019 semester. By the end of the Spring 2020 semester, 964 Alerts had been submitted.

Marth said Alerts are sent for various reasons like concerns with students’ academic performance or their physical and emotional well-being. He said most Alerts in the spring were related to academic success and remote learning, while typically about a third of Alerts pertain to students’ mental health.

Marth said he saw an increase in Alerts reported in April to the Student Relations office, which specializes in student health, partly due to an increase in psychosocial stressors such as financial concerns, housing issues and mental health concerns.

Cravens said services during the summer are normally only offered to those enrolled in summer classes, but regardless of enrollment, students can receive help with case management and referrals for care.

In addition, Beverly Anderson, associate dean of Student Health and Support, said due to current events and protests around the world regarding the death of George Floyd at the hands of police, Counseling Services is offering resources this summer for all students who were enrolled in classes for the 2019-2020 academic year.

Isaiah Moore, a junior television and cultural studies double major and co-president of the Black Student Union, said the college did not make it a priority to inform students of counseling services that were still being offered during the Spring semester.

“In a time like this, [Columbia] should really be going above and beyond to make sure their communication is really efficient, to make sure students know they’re supported by the college,” Moore said.

Despite the challenges regarding mental health and counseling services, Roushdi acknowledged the unprecedented nature of the pandemic.

“We’re all experiencing an extremely challenging time,” Roushdi said. “A lot of people’s anxiety [and] depression are being compounded by this time. … I think people need more help with their mental health than they typically did.”