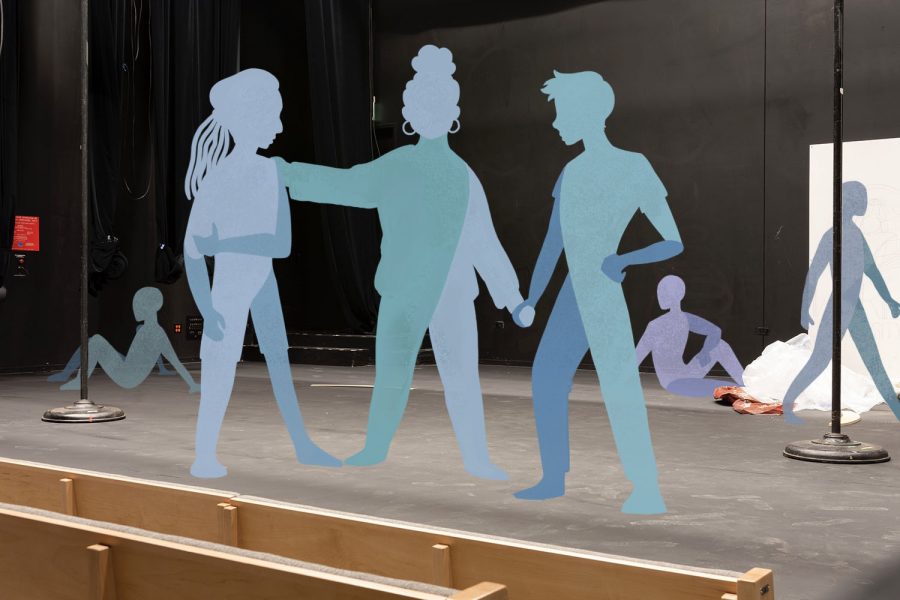 By Lauren Leazenby and Isaiah Colbert

The script reads: “Two characters are having an affair and decide to run away together. Talk leads to touch and a romantic embrace.”

Kasi Moreno, a junior ASL-English interpretation major with an acting minor, could sense her acting partner’s discomfort as the scene unfolded, but did not know how to make it less awkward.

“You’re trying to lovingly fondle somebody, and you can feel how tense they are and everyone’s looking at them. They’re clearly not having it,” Moreno said. “Now I literally have to touch this person, and I know they don’t want me to.”

After some rehearsal, she said her scene partner became more comfortable with the closeness.

Having an intimacy director in the classroom during the rehearsal would have allowed Moreno and her partner to focus more energy on acting and character progression than on getting comfortable, she said.

Intimacy directors work on theatre productions, as well as film and TV sets, to ensure the well-being of actors in intimate scenes by, among other things, choreographing scenes with the director and acting as an advocate for the performers.

Intimacy direction differs from intimacy coordination in that coordinators typically work on film or TV sets while directors work with theatre productions.

Demand for this new position is booming as big-name studios adopt these new expectations post-#MeToo. In 2018, HBO announced all of its shows with sexual scenes would have an intimacy coordinator present on set. Netflix is also using intimacy coordinators for its show “Sex Education,” and other networks are following suit.

The Screen Actors Guild released standards and protocols in January for the use of intimacy coordinators, encapsulating practices such as requiring coordinators to have federal and state background checks and requiring them to get verbal consent from performers for anything expected on set.

But with the newfound demand, the number of certified coordinators is low.

To fulfill this growing job market, Columbia is partnering with Theatrical Intimacy Education, an academic organization focused on teaching intimacy work, to consult with the Theatre Department and help create a graduate certificate program specializing in intimacy direction, said Carin Silkaitis, the Allen and Lynn Turner Chair of the Theatre Department.

The graduate certificate program is currently in the initial vetting process with the departmental curriculum committee. Despite campus closures due to the coronavirus, the Theatre Department will still submit the curriculum for a vote in the fall, she said. If all goes according to plan, Silkaitis said the program will be available for students beginning in Fall 2021.

Silkaitis said the end result will be a graduate certificate that can be completed over 12 credit hours. Undergraduates may be able to complete the certificate in a “three-plus-one” program, in which credits for a major are completed in three years and a final year is dedicated to earning a certificate.

TIE will be approving curriculum and syllabi for the courses per an agreement between the department and the organization, and TIE co-founder Chelsea Pace’s book “Staging Sex” will be used as a textbook for the courses.

Samantha Kaufman, a professional intimacy and fight director slated to work on the Chicago Steep Theatre’s production of “Ironbound,” said the positions have long been needed.

“Intimacy direction is a reaction to the idea that there is a void in our theatres, in our film, that is just now being developed,” Kaufman said.

The #MeToo movement has made it important to include intimacy direction as part of how theatre productions and films operate, Kaufman said. However, she added that intimacy direction is not merely a reaction to #MeToo, as the field has existed for many years.

Kate Piatt-Eckert, executive director of Steep Theatre, said the theatre uses intimacy directors—or choreographers—not just for the safety of the artists, but also to help advance the story through intimate scenes.

“[Kaufman] is far from the first intimacy choreographer we’ve worked with,” Piatt-Eckert said. “It’s a fairly common role in Steep productions and has been for a few years.”

The field of intimacy direction is growing, Piatt-Eckert said, due in part to the attention the profession itself has received. She said many Chicago theatres employ intimacy choreographers in productions due to the Chicago Theatre Standards, a 2017 document that lays out guidelines for safe theatre environments.

Piatt-Eckert said she would tell students looking to become intimacy directors the same thing she would tell other young artists: Find professionals who are doing admirable work and learn from them.

Bessie Zolno, a senior musical theatre major with a stage combat minor at Columbia, is in the process of becoming certified as an intimacy director. For her, that process has included attending intimacy direction workshops and cultivating mentorships with professional intimacy directors.

For Zolno, certification also includes work as a teaching assistant at Columbia. In her “Intimacy and Physical Theatre” class, she covers topics such as consent, advocacy and staging physical intimacy scenes.

“I have had personal experiences in professional theatre … where there is a lack of understanding between the directors and the performers about intimacy and help to create a safe and a brave face that can allow this work to happen,” Zolno said. “Oftentimes people get taken advantage of, and we can create unsafe situations by a lack of knowledge about how to carefully go about building these things.”

Lev Handmaker, a sophomore acting major, said actors are expected to stand up for themselves if they feel uncomfortable, so it is good to know there are rules and guidelines to follow with intimacy coordination.

“It works really well in a classroom setting,” he said. “Between two students, maybe a directing student working with an acting major, it’s not really talked about because it’s sort of just assumed that if you feel uncomfortable, you’ll tell me.”

Chloe Clement, a sophomore musical theatre major, said intimate scenes do not go without proper direction in all student productions. In her high school productions, she said the director often took charge of making the student actors feel comfortable with their scenes.

Clement said because all shows are different, they may not all require a dedicated intimacy director. Still, she said, all directors should be familiar with the practice and should know how to handle intimate scenes.

“Having someone that was very attuned to that and to the comfortability of the actors was such a blessing,” Clement said. “If the actors aren’t comfortable and [don’t] feel safe and secure in what they’re doing, it’s a risk to them. They’re not doing their job, which is to portray the character honestly.”