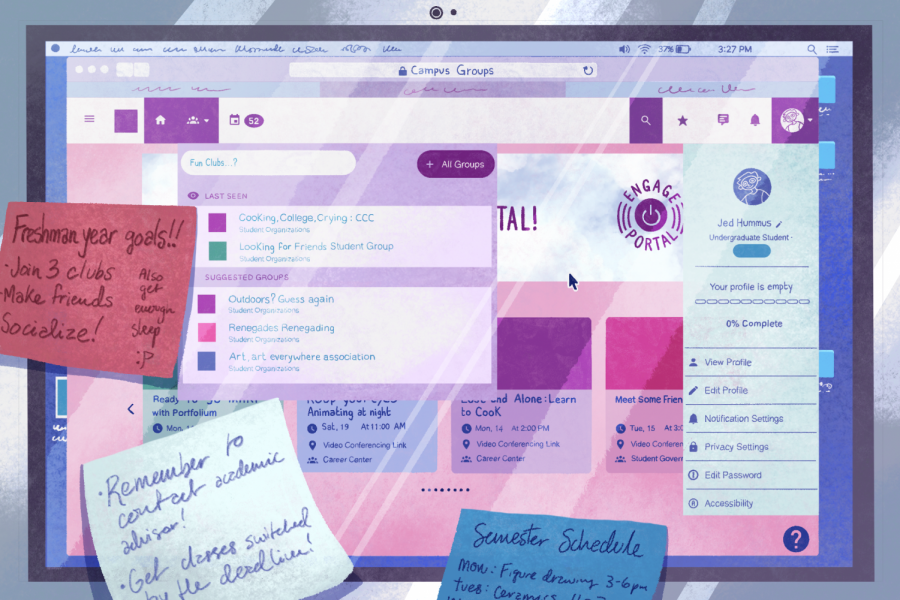 With the 2020-21 academic year in full swing, the college has unveiled a new community platform with the hope of bringing students closer than before, despite most fall interactions taking place online.

The platform CampusGroups, sometimes called the Engage Portal by Columbia students, has a social media element which allows students to connect with one another, according to Kari Sommers, associate dean of Student Life. The virtual outreach also gives student organizations the opportunity to connect with students and allows employees from across the college to easily work with one another.

“It’s a way to bring the people across the college who work in different buildings together so they can support students,” Sommers said. “The essence of this tool is student support and engagement.”

Senior television and cultural studies major Isaiah Moore said CampusGroups is similar to Facebook. Students can create their own profiles and add their bios and be searched based on their year, major and any hobbies or interests they indicate on their profiles.

Moore, president of the Student Organizations Council, said student organizations can create their own pages, post their events and designate leaders. Students can also directly RSVP to events on the app.

Collegewide events can be accessed through the app, like new student orientation and virtual convocation recently were, Moore said.

“Coming in as a new student, it’s terrifying [trying to make friends] under normal circumstances, and it’s even harder when you can’t physically meet people,” Sommers said.

She said the rollout of the new platfrom did not come as a result of the pandemic, as the college has been working on implementing CampusGroups for “a couple of years” and began seeking input in October 2019.

June Keating, a sophomore TV executive producing and entrepreneurship major and president of the Cult Cinema Club, said CampusGroups will play a vital role in getting students involved on campus during the pandemic.

“It’s a weird time for everybody … people are going through their online classes, and even though it’s more work, I think people are less likely to put in extra effort to go to clubs,” Keating, a former Chronicle staff reporter, said. “It’s important to have something like that where we’re encouraging students to still be involved in campus activities during the pandemic.”

Keating said because Columbia’s virtual convocation was held on CampusGroups, her student organization garnered plenty of interest from attending students.

The launch of the new platform has not gone without flaws though, according to some student organization leaders.

Julian Banzon, a junior acoustics major, president of the Asian Students Organization and vice president of the Acoustic Society of America Columbia Chapter, said some of his peers had trouble logging on to the app, as a “404 error page” would pop up numerous times before they finally got in.

Sommers said login issues have taken place because the single sign-on feature was not fully developed and ready for the platform in time for orientation—a feature which has since been added by the IT department.

Sommers said despite an “imperfect” start, she is proud of the college’s efforts.

“There will be experimentation during this time … not just from students, but from other parts of the college,” Sommers said. “Experimentation means things are not ever perfect. [But] when they’re good, they’re better than your wildest expectations.”