Columbia faculty, students share their reactions to the 2020 election results 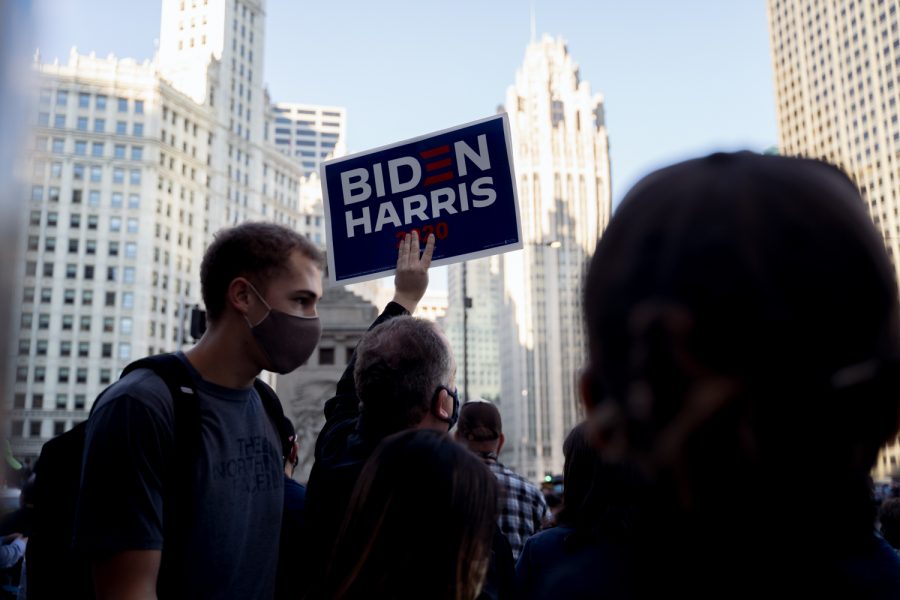 Democratic nominee Joe Biden was declared as the president-elect Nov. 7 after days of waiting for results.

Before news outlets projected former Vice President Joe Biden as the winner of the 2020 presidential election, Sharon Bloyd-Peskhin, associate professor in the Communication Department, decided to take some friends kayaking downtown on the Chicago River the morning of Saturday, Nov. 7.

When the results were announced, Bloyd-Peshkin said she and her friends were surprised by sounds of people celebrating on the streets above them.

“We just heard people exploding with cheers and [cars] honking,” she said.

As of publication Nov. 19, with votes still being counted in some locations, the Associated Press reports 79,588,628 votes cast for Biden, securing him at least 290 electoral college votes and surpassing the 73,651,173 votes and 232 electoral college votes for President Donald Trump. Some news outlets like CNN have projected Biden as winning Georgia, which would give the former vice president 306 electoral votes.

Despite these results, Trump has not publicly acknowledged his loss, instead insisting he won the election and the voting process was “rigged.”

“We’ve never been in a situation where a president has refused to concede, and where senators in the opposing party have refused to congratulate the winner and where an outgoing administration has refused to allow the formal transition to begin,” Bloyd-Peshkin said. “There’s a lot to look forward to, but right now we’re not there yet, and I’m very concerned about this transition.”

For Rojhat Avsar, associate professor in the Humanities, History and Social Sciences Department, this was his first time voting as a U.S. citizen since moving to the country 16 years ago.

“I always voted in Turkish elections before [this year] … so I never really thought of not voting as an option,” Avsar said. “I think of it as a way to express your values.”

Up until the announcement, Avsar said he was constantly checking the live election results to be confident and felt emotionally taxed and tired.

Even though Biden was announced as the winner, Avsar said it will be hard to predict what will happen leading up to Inauguration Day, making these next couple months as unpredictable as the last four years.

Wisdom Murray, a freshman theatre major, said he was moving between apartments with his mother when they heard of Biden’s win and decided to have a few celebratory beers to savor the moment.

“We weren’t celebrating Biden’s win—we were celebrating Trump’s loss,” Murray said. “We need to be really critical of Biden because we had to settle for Biden.”

Murray said people should not be idolizing Biden, Vice President-elect Kamala Harris and any politician as heroes or rock stars, instead, people should be deciding if they agree or disagree with a politician’s position on issues.

Diana Vallera, president of the college’s part-time faculty union, CFAC, said she was watching Wolf Blitzer on CNN with her wife and daughter when Biden’s win was announced.

“I was stunned,” Vallera said in a Nov. 12 email to the Chronicle. “My daughter remembered going to bed in tears when Hillary lost. She was frightened about what a Trump administration could mean for our family and for the future of our country.”

Vallera, an adjunct faculty member in the Photography Department, said it became clear who would win the election when Biden won key states like Pennsylvania and Georgia, where votes usually steer in favor of Republican candidates.

Voter estimates and exit polls show the youth voter turnout has risen in the last four years and Black women played a pivotal role in the election’s outcome.

According to estimates by CIRCLE, a non-partisan research organization focused on youth civic engagement, about 50-52% of young people between the ages of 18 and 29 cast a ballot this election. This is an 8% increase from the 2016 election when the turnout was around 42-44%.

Kin Marie, a senior marketing major and president of the Black Student Union, said the reports show how young people and Black women are not heard in the media and how social media worked in encouraging people to take action.

“It really shows what we can do if you just move out of the way and let [young people and Black women] do what we are supposed to do,” Marie said.

Marie said she slept in on the morning of Nov. 7, with her notifications off so she would stop checking her phone for updates.

Soon after waking up and seeing a post on Twitter, Marie said she was relieved to find that Trump had not won reelection—until more questions and anxiety set in surrounding Biden’s role in solving systemic issues.

“We have a lot of social, racial [and] political issues which are constantly dealt with on a very performative surface level, especially when it comes to the Black Lives Matter movement and things like that, but are never actually dealt with,” Marie said. “There’s really nothing that I can do but stay in the loop, be here for my community and make sure that the people I love and care for are protected.”