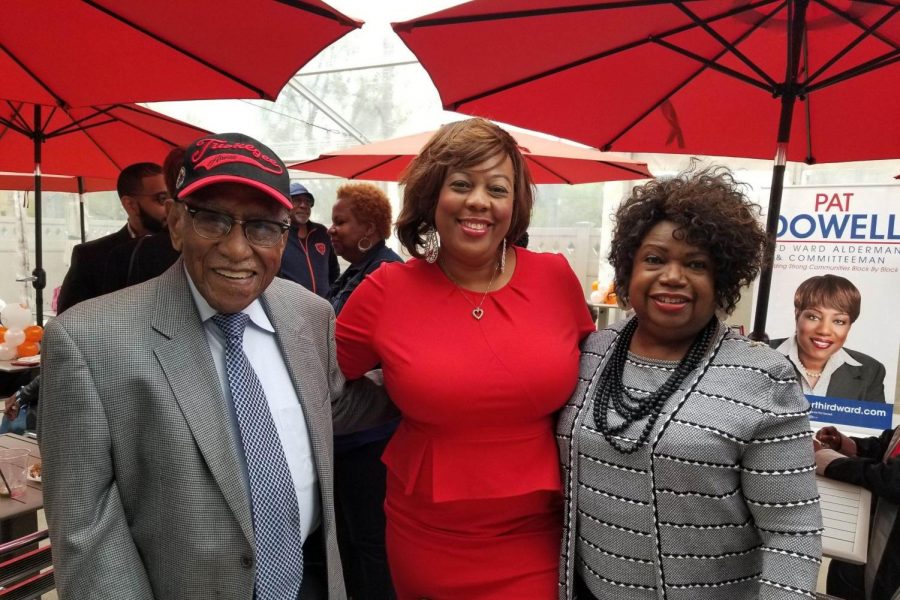 When Chicago activist, author and historian Timuel Black died at the age of 102 on Oct. 13, his passing had a special impact on the Columbia community.

Some had grown up in Chicago and had heard his name mentioned with respect and reverence in their homes. Some met him in their professional roles, while others sought him out for his historical knowledge and perspective.

Black was born in Birmingham, Alabama, but grew up on the South Side after moving to Chicago during the Great Migration. According to The History Makers, he earned his Bachelor’s degree at Roosevelt University, followed by a Master’s degree from the University of Chicago and taught at Roosevelt High School in Gary, Indiana, and DuSable High School in Chicago. He held several academic and administrative positions at City Colleges of Chicago, where he held the position of professor emeritus.

Black worked with Martin Luther King Jr. and led a group of Chicagoans to the March on Washington, according to NBC Chicago. He also helped late Chicago Mayor Harold Washington during his mayoral campaign by leading voter registration efforts.

Hope Daniels, a former faculty member who also served as associate provost for Academic Affairs at Columbia, said she met Black while working as the Illinois press secretary for former U.S. Senator Carol Moseley Braun. While traveling the state on Braun’s behalf, she met Black, as he was Braun’s adviser.

“We [would sit] in the living room, chatting. He would say things that would make you sit up and go, ‘Oh, okay.’ He would do it with a little glint in his eye and a smile on his face,” Daniels said. “All of the sessions that I remember being in the room when Tim was there were very casual.”

Daniels said when Black taught history in high schools, he included Black history in his curriculum before it was required.

“He would embed it right in. When people graduated from high school after having Tim, they knew Black history. Not every high school was like that,” Daniels said.

Daniels remembered how much Black loved jazz, especially Duke Ellington’s music — in particular, his song “Come Sunday,” which was sung at Black’s funeral.

“If we caught up with [Black and his wife] at a jazz festival or a jazz concert — and this is over the years — you had to be quiet because Tim wanted to hear,” Daniels said.

Black is survived by his wife Zenobia Johnson-Black. Daniels remembers the love the couple shared.

“He used to call her his bride,” Daniels said. “I mean, they’ve been married 40 years. ‘This is my bride.’ Wow. You pray for that kind of relationship.”

Robert Hanserd, professor in the Humanities, History and Social Sciences Department, met Black in the early ’90s during graduate school during an internship at what was then called the Chicago Historical Society, now the Chicago History Museum. They met through now retired Chicago historical scholar Christopher Reed, Ph.D., while doing graduate work.

“I happen to mention him to Dr. Reed [while] we were walking down Wabash somewhere, and there he was,” Hanserd said.

Hanserd described Black as easygoing and friendly — someone who would talk to everyone and remembered everyone he came across. After their first meeting, Black greeted Hanserd with a handshake each time they saw each other.

“I would see him everywhere [like] downtown functions, where he’d talk to various folks in the city. Then, I would catch him [at] this little cafe right by the South Side Community Art Center there where they have soul food,” Hanserd said. “That patience and that humility that he showed to talk to and work with all types of people, I think I have respect for that.”

Black even inspired people before they met him. Shanita Baraka Akintonde, associate professor of instruction in the Communication Department, said she “met his reputation” first, as he was a prevalent name in her childhood household because of his books.

Akintonde said his book “Bridges of Memory” inspired an article she wrote for the Chicago Tribune titled “The Pull of South.” The article discusses how Black people, especially in the Chicago area, are starting to migrate back down to the southern United States because they’re trying to stretch their dollars to make ends meet.

Akintonde called him a living lesson plan, saying his work as a historian left a generational footprint in the world.

“He lived to be 102 years old, that’s more than a century,” Akintonde said. “That means the wealth and depth of his knowledge is unparalleled. So that, again, is awe inspiring to me.”

In addition to his wife, Black is survived by his daughter, Ermetra Black-Thomas. He was preceded in death by his son, Timuel Kerrigan Black, and stepson Anthony Johnson, according to the Chicago Tribune.