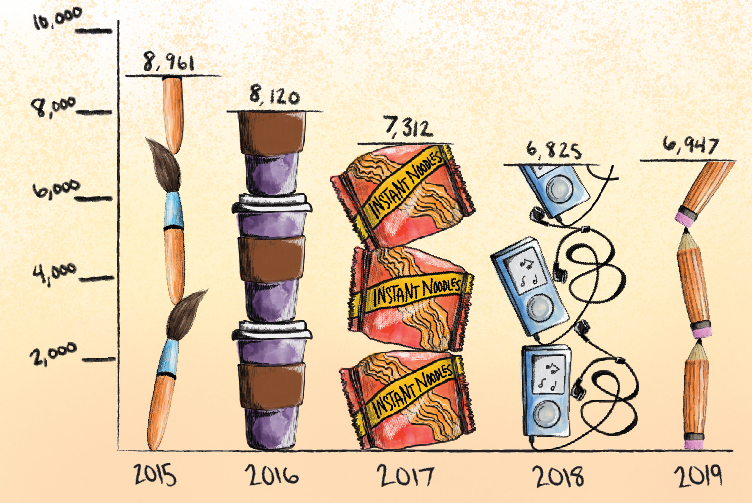 This increase is compared to Fall 2018, which saw 6,825 in total enrollment, according to Institutional Effectiveness data.

This spike in enrollment is a result of the large number of incoming freshmen, a 34% increase from Fall 2018. This freshman class is the “most diverse ever” with 49% of students identifying as a person of color, according to the announcement.

“This year, we boosted scholarship spending, in particular increasing the number of portfolio-based scholarships awarded by faculty and launching new scholarships for students at [CPS] high schools focused on the creative fields,” Kim said. He added scholarships have also been extended to high school students nationwide from the Arts Schools Network.

Kim said the census also found 90% of recent Columbia graduates reported having a job within a year of earning their degree.

The retention rate—the number of students who entered as a freshman and stayed for their sophomore year—has increased by 4% from the previous year, raising this year’s retention rate to 71.5%, the highest rate on record for the college, Kim said.

“We are all committed to offering quality academic and professional opportunities to every one of our students, and I am proud to reaffirm our institutional commitment to ensuring that the broadest range of students have access to these opportunities,” Kim said. “We have asked a lot of each other and been through a lot together over the last few years, so it is particularly gratifying to see things coming together.”

Correction 10/01/19 at 3:25 p.m.: A previous version of this article referenced faculty and staff layoffs when it should have stated staff have been laid off and faculty have departed from the college through the Voluntary Separation Incentive Program. The Chronicle regrets this error.