The Columbia Chronicle • May 20, 2021 • https://columbiachronicle.com/columbia-bands-and-artists-compete-in-biggest-mouth 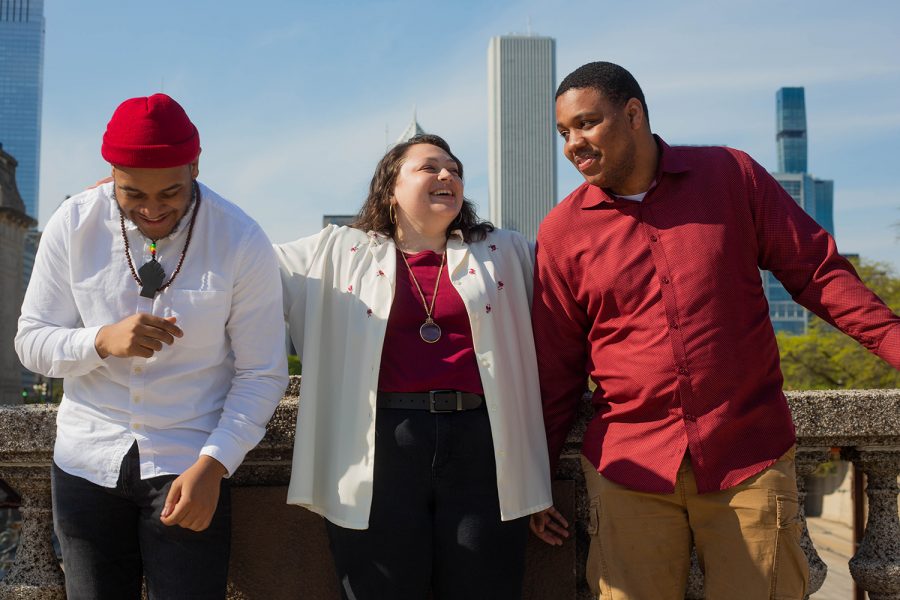 Stutts, Kizer, and Lewis share a laugh in Grant Park.

Two years ago, junior music major Paige Kizer was looking for a band to play with her. She asked her Columbia classmates Aduarius Stutts and Tria Kraft if they would be interested. They both said yes.

Kizer then brought Chris Rohner in as the band’s guitarist, and later junior contemporary, urban and popular music major Jonathon Lewis was able to join as the bassist. The group met all together for rehearsal and immediately connected musically, officially marking the launch of the new band: Paige and the Kizers.

“Not only did everything click, but it clicked so well that it was almost like an out of body experience,” Kizer said. “I could not believe that my songs that I had written on my dinky little keyboard were now these powerful, loud songs.”

The pop-punk band won the first prize in the Biggest Mouth competition: $1,000, a Manifest performance slot and a studio session, among other prizes.

Kizer, the band’s vocalist and songwriter, said their music is about emotions.

“We have a really deep-rooted connection with emotion in our music,” Kizer said. “It’s all about being authentic and genuine and trying to make something that someone can relate to.”

Biggest Mouth is an annual competition hosted by Columbia in which 12 bands compete for first prize. This year’s competition aired live on the Columbia Department of Exhibitions, Performance and Student Spaces Twitch page April 22, and Paige and the Kizers played virtually for Manifest May 12.

Kizer, along with junior music major and drummer Stutts and bassist Lewis, agreed their music does not take any direct influence from other musicians.

“We haven’t really been compared to anyone,” Stutts said. “I would say we’re very unique. Our sound is very different. We play from emotion; we play to connect to the crowd.”

The members began playing instruments when they were young, but discovered music through different outlets. Kizer grew up hearing music in her church and played the saxophone in high school. Both of Stutts’ parents are singers, and he began drumming when he was 2 years old. Johnson grew up listening to gospel and Stevie Wonder and got his first guitar when he was 11 years old.

“We all bring a little sauce to the table,” Lewis said. “Especially with our influences and our backgrounds. For me, that adds a lot more to the emotional aspect.”

Henry Arp, a senior audio design and production major and bassist and vocalist for Zorila, has been writing music since he was a kid. When his older brother, Stewart Arp, needed a backup band for a concert, Zorila was born.

Arp described their music as being inspired by the Strokes, with influences from Kings of Leon and the Killers.

As for the name, Arp said that the band did not want a name that was going to box them into a certain genre. From a bulletin board of different ideas, Stewart came up with Zorila, a blend of “zebra” and “gorilla.”

“Zorila stuck because it seemed like something we could do whatever we wanted with, musically,” Arp said. “Stew[art] came up with the name late at night; it was just this idea of, ‘What if a zebra and a gorilla were one animal?’”

Both bands say they will continue to produce and release new music throughout the summer. Paige and the Kizers can be found on Facebook and Instagram, and Zorila has a website where they post their new releases.