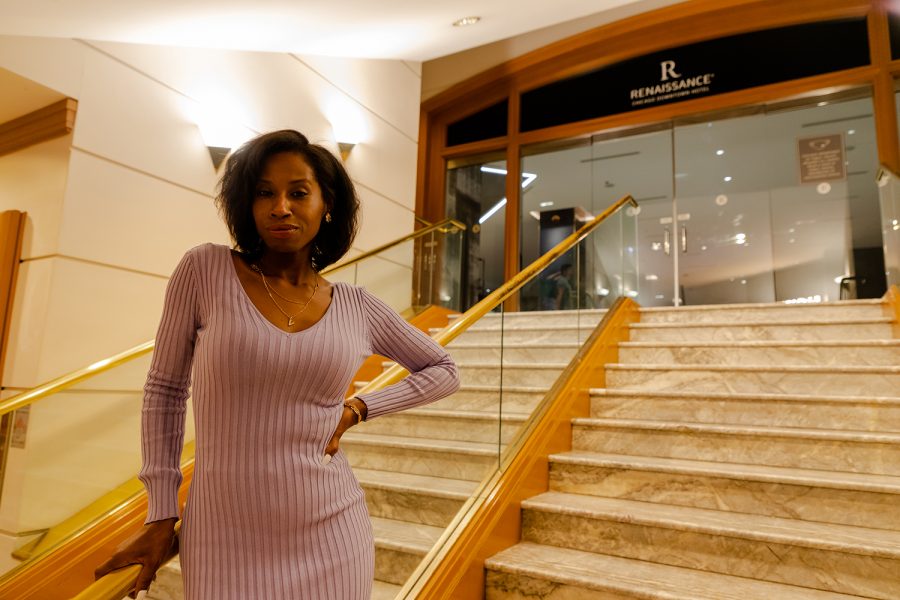 Author of “Hood Healing” Vee L. Harrison dives into the issues that Black youth face in their community while also exploring her own pain and trauma.

Vee L. Harrison still clearly remembers every detail from Super Bowl Sunday of 2021, but not for the reason people might think.

“On Super Bowl Sunday [my mother] literally got on my phone and said, ‘Someone called us and said that your brother’s been hurt, find out what happened now,’ and she hung up the phone,” Harrison said. “I immediately panicked.”

Harrison said she was worried because her brother had survived a shooting a few months earlier. She called his wife and their sister, but was the first in the immediate family to know, which she said put a lot of pressure on her.

“At the same time, [I’m] trying to figure out if my brother is alive and trying to report that back to my family,” Harrison said. “After we learned that he got hurt, they weren’t very detailed in what they were telling us.”

She later learned that her brother, Darryl Anthony Harrison Jr., had been fatally shot and found on the 300 block of South Cicero Avenue.

Harrison, an arts and culture reporter at Pigment International, said Chicago’s local media chucked it up to gang violence and gang involvement.

“Knowing my brother, I realized that it wasn’t that,” Harrison said. “That let me know the importance of telling the stories of the souls, spirits and the human beings that have been shot, killed, murdered and lynched. [I realized that our] culture was important.”

Harrison said she bore an immense responsibility — mentally and emotionally — being the designated family member to figure out what happened to her brother.

In her debut book, Harrison, a Columbia alum, uses the painful loss of her brother as a gateway to the generational trauma currently existing in Chicago’s Black neighborhoods.

Through Harrison’s own experiences with trauma and interviews with experts on the topic, “Hood Healing” dissects matters that affect the Black community such as the effects of post-slavery, redlining, lack of inner-city mental health facilities, the disconnect between the media and Black youth and the disconnect between the police and Black youth.

Each chapter in the book includes a featured interview with professionals such as Evan F. Moore, former Chicago Sun-Times entertainment reporter and current press secretary for Chicago Public Schools, and Garrard McClendon, an author and Emmy award-winning journalist and associate professor in Education Policy at Chicago State University.

In “Hood Healing,” Moore discussed the lack of positive activities for youth to participate in within our communities.

Moore said when he grew up on the South Side of Chicago, there were “plenty of things to do” in his community.

“It’s not the same for kids these days due to intentional divestment, violence, poverty [and] so many different issues,” Moore said. “I feel like that’s why you see a lot of young people lean into the crime and violence.”

Additionally, a chapter in “Hood Healing” includes an interview between Harrison and her mother, Sandra Harrison, and the foreword for the book was written by MTV news correspondent Dometi Pongo.

Harrison said it was while attending Columbia that the birth of her writing began. Harrison acknowledged professors and mentors such as Suzanne McBride, Curtis Lawrence, Bonnie McGrath and Natalie Moore for helping shape her as a journalist.

“All of those memories have taught me to just keep going in journalism because all of those people are in the field,” Harrison said.

Harrison said she also learned how deep her trauma ran while writing the book.

“I didn’t realize what was wrong with me,” Harrison said. “It took me having a child, going through situations, being locked up in jail, to literally realize that I was traumatized, but not from my mama. From my ancestors who were slaves on ships, connected by ankle alone, cold, scared, but together, enslaved.”

Dena Chapman, the editor of “Hood Healing,” published by Thought Collection Publishing, said people will gain insight into Harrison’s strength and vulnerability when reading the book.

Chapman said Harrison discloses a lot of personal trauma in “Hood Healing,” and that it is authentic.

“[Harrison] has given other people permission to unmask their own vulnerabilities and their own trauma and to begin that journey [of healing],” Chapman said.

Harrison said part of the impact of “Hood Healing” is that through the book she would leave something for her community and her children.

Harrison said as she began to report during COVID-19 and the uprising after the murder of George Floyd, she further realized the importance of writing “Hood Healing.”

“I realized that if I don’t leave my children something … time may run out where I wouldn’t be able to,” Harrison said. “‘Hood Healing’ would be something for my community, but my legacy for my babies as well.”

“Hood Healing” will be available on Amazon later this year.