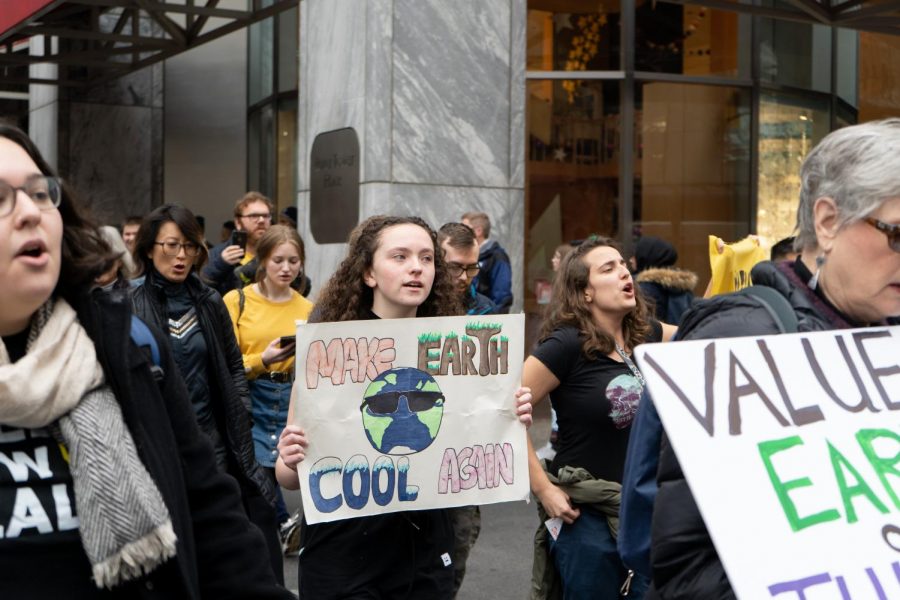 The strikers continue their demonstration as they proceed to the Chicago Water Tower, 806 Michigan Ave., where organizers deliver speeches.

Just hours after giving thanks, hundreds of shoppers jumped from store to store across the country scouring for the best Black Friday deals. But, Chicago environmental activists took a different approach to the celebration—by gathering for a demonstration at Water Tower Place.

Led by the Illinois Youth Climate Strike and Sunrise Movement Chicago ahead of the COP25—the 2019 United Nations Climate Change Conference that will take place in Madrid Dec. 2—the demonstration featured 80 synchronized activists who emerged from several stores on the fourth and fifth stories of Water Tower Place, 835 N. Michigan Ave.

While more climate strikes were planned for Friday, Dec. 6, Sunrise Movement Chicago leader Emily Isaacson said Thanksgiving is “a holiday that has such vital importance to the climate crisis … that often glorifies the genocide of indigenous [people].” Isaacson said indigenous people have to be prioritized in the Green New Deal as they “are on the front lines of the climate fight.”

Extinction Rebellion activist Barry Feldman’s goal for this strike was “pointing out on Black Friday, the premier shopping day of the year … the loss of perspective of what’s really important for humanity.”

The strike was held inside Water Tower Place because the building is “the mall of all malls—[it’s] the center of commerce downtown,” Isaacson said.

After protesters started singing, Water Tower Place security told them to leave and escorted them to the exit. The strikers continued singing as they proceeded across the street to the Chicago Water Tower, 806 Michigan Ave., where organizers delivered speeches.

While some shoppers walked past the strikers along the Magnificent Mile, some stopped and asked the activists why they were protesting.

“It’s hard because people don’t want to face [the climate crisis]. But we in this group have to be the ones to bring that message,” said Diane Thodos, an Extinction Rebellion activist. “We have to do it in a way that is civil disobedience. There’s no other option. The non-civil disobedience ways haven’t worked.”