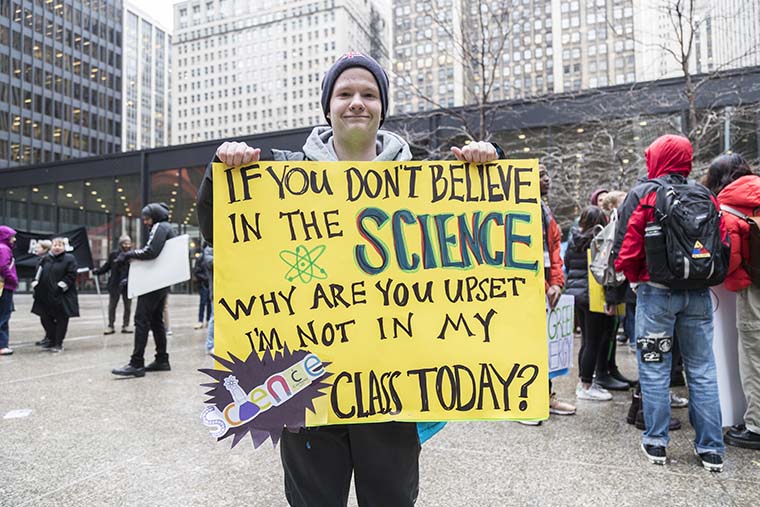 At the plaza, in front of the Kluczynski Federal Building, 230 S. Dearborn St., high school students raised signs in protest on March 15, one of which read: “Planet over profit.” Another read: “We are living on this planet as if we had another one to go to.”

Anthony Zangler, a junior at Marmion Academy in Aurora, said the planet has a limited amount of resources, and society needs to consider conservation rather than profit.

“We want to start a movement and hope our political leaders will start the change,” Zangler said. “We are here to inspire that.”

Sadie de Forest, a sophomore at Jones College Prep, said politicians need to do something about climate change before it becomes irreversible.

“The dramatic changes in weather are already affecting people,” de Forest said. “Twenty-one people died in the polar vortex, and it will continue to affect people if we don’t do something now. We’re the final generation who can really make a change.”

Savannah Clark, a junior at Jones College Prep said, young people are taking action because time is running out, and the younger generation will feel the full impact of climate change.

Clark cited the Crawford Power Generating Station in Little Village, which closed in 2012, as one example of how climate change has negatively impacted the health of people in Chicago. Toxins and carbon emissions can lead to respiratory issues for children who lived near the plant, including asthma attacks and bronchitis, Clark said, adding that the health problems are not limited to Pilsen.

“Kids who are in those lower-income neighborhoods are suffering, and they can’t do much,” Clark said.

“We are putting no investments into saving the Earth. We all live on it, we are all using it and people are taking it for granted,” Rahtz said “We have to take action.”

De Forest said those currently in power do not care about this issue because the brunt of the impacts of climate change will come after they are gone.

“Even though we didn’t create the problem, the older generation does not care enough to do anything, so we are forced to step in,” de Forest said. “I stepped out of school so other people [will] still exist in the future [and are] able to go to school and learn. The only way politicians listen is in a dramatic act of rebellion.”