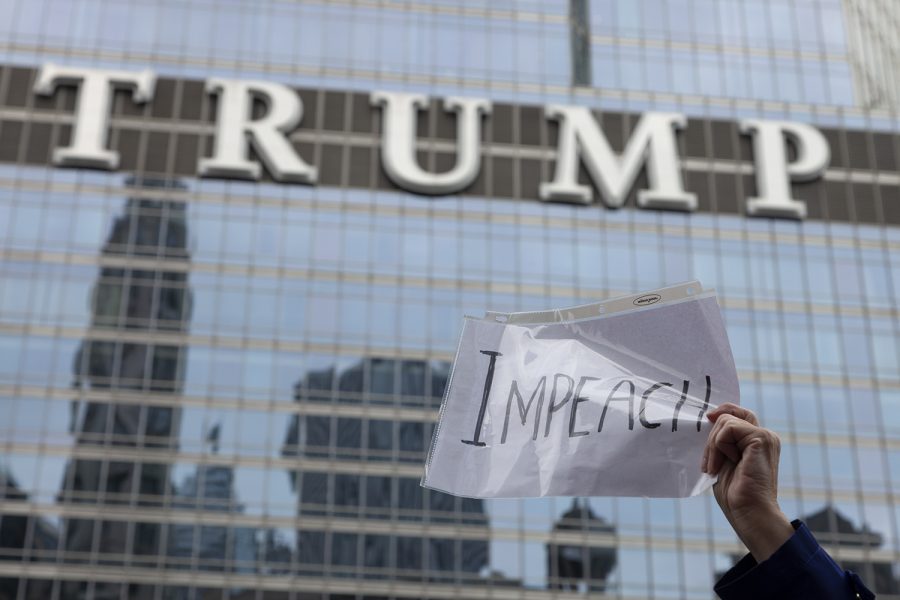 A protester holds up a sign that reads, "Impeach," across from Trump Tower during President Donald Trump's first visit to Chicago since he took office, Oct. 28.

Ten minutes into his Oct. 28 address to the International Association of Chiefs of Police Annual Conference and Exposition at McCormick Place, 2301 S. King Drive, Trump took shots at Chicago Police Superintendent Eddie Johnson, who did not attend because of his disagreements with Trump’s immigration policy.

Trump called out Johnson for “not doing his job” and pointed to the crime rates in Chicago.

“Last year 556 people were murdered in Chicago,” Trump said. “Chicago has the toughest gun laws in the U.S. That doesn’t seem to be working too well now, does it?”

However, overall crime reports in Chicago have dropped 10% since 2016, when it was at an all-time high, according to a Jan. 1 article by CNN.

Trump also pointed out the “scam” of Jussie Smollett, the “Empire” television actor who alleged Trump supporters physically assaulted him in January—a claim that was later determined to be unfounded by Chicago police, as reported Oct. 23 by the Chronicle.

“Chicago is, unfortunately, the worst sanctuary city in America. Chicago protects criminals in a level that few can even imagine,” Trump said. “It’s embarrassing to us as a nation; all over the world they’re talking about Chicago. Afghanistan is a safe place, by comparison.”

During his address, Trump signed an executive order to establish a presidential commission on law enforcement and a framework for training, recruiting and retaining police officers.

Outside the Trump International Hotel and Tower, 401 N. Wabash Ave., thousands of protestors gathered to voice their opposition to Trump through shouts of  “dump Trump” and “lock him up.”

Many of the organizers came to highlight issues ranging from immigration to the climate crisis. Demonstrators from the picket lines of the Chicago Teachers Union also joined the crowd.

Lexie Schustrom, a sales and marketing manager, skipped work to attend the protest because it was “more important than an afternoon of administrative work.”

Many of the protestors held signs calling for Trump’s impeachment.

“How else do you expect change to happen or to get your point across unless you get out there?” Schustrom said. “For the longest time, I didn’t support impeachment just because I thought it’d make [Trump] a martyr—and I’m still afraid it would and kind of rally that radical right—but I think, at this point, ignoring what’s gone down [is wrong].”

Chicago resident Benetta Mansfield brought her 5-year-old grandson to the rally, in part because Chicago Public Schools were still closed due to the strike. Mansfield said her grandson has become a veteran protestor.

While the crowd called to “dump Trump,” he would say “dump truck,” Mansfield said.

CPS first-grade teacher Thomas F. Keating attended the rally as both a CTU demonstrator and a Trump protestor. When it comes to the 2020 election he supports “anyone but Trump,” Keating said, although he likes South Bend, Indiana, Mayor Pete Buttigieg.

Trump’s visit to the blue, sanctuary city marked a milestone in his political career after his last visit to Chicago during his 2016 presidential run was cancelled due to safety concerns over the massive planned protests outside the site of the scheduled visit.

Although the majority of Chicago voters typically support  Democrats, Trump is widely supported throughout the state, making this a prime location for a fundraiser. In the 2016 election, Democratic presidential candidate Hillary Clinton only carried 11 counties in Illinois, one of which was Cook County, thereby securing the state’s electoral votes despite Trump taking the remaining 91 counties.