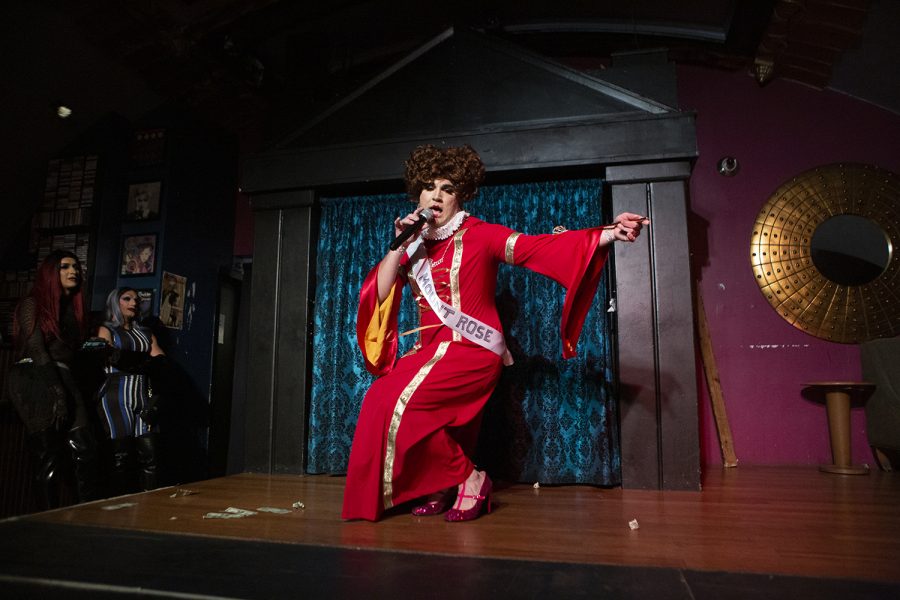 Febreezja Couch won the 2019 pageant, scoring the association more than $4,000, which helped the Red Liners fund travel to tournaments across North America.

Five local hockey players traded in their skates for sparkly pink heels and fishnet stockings for a night of drag beauty pageantry.

The drag pageant, hosted March 7 at Mary’s Attic, 5400 N. Clark St., was the second one put together by the Chicago Gay Hockey Association, a nonprofit founded by a delivery truck driver named Chuck Jacobson in 2002 that works toward making hockey more accessible and inclusive.

The organization is made up of the C3 division team Johnny’s Red Liners that plays at Johnny’s IceHouse and the Chicago Outdoor League Red Liners. Since its inception, the association has won 12 hockey championships across North America.

“We always like to come up with ideas of really creative fundraisers,” said Brian “Febreezja Couch” Hull, board director of the association and reigning queen of the drag beauty pageant who plays wing for the indoor and outdoor Red Liners teams. “Hockey is a very expensive sport, so what we try to do is take those funds to help subsidize the tournament travel for a lot of our teammates that aren’t able to fund themselves.”

On Thursday, March 5, two nights prior to the pageant, the association participated in the first annual Chicago Blackhawks Pride Night at the United Center, 1901 W. Madison St. The Blackhawks are one of the association’s sponsors, and players from the two organizations traditionally march together during Pride Parades.

“The Blackhawks have always been a wonderful partner of ours,” Hull said. “They were actually the first ones to allow the Stanley Cup to be in the Pride Parade.”

The Drag Beauty Pageant was born from an informal tradition where players on the Red Liners teams would get together in drag on Easter. Some members thought it would be funny to organize a pageant as a fundraiser, which scored the association more than $4,000.

Following their initial performances, Gutman and Tiet were eliminated by reigning queen and judge Hull. The three finalists then advanced onto a lip-syncing battle to Britney Spears’ “Toxic.”

The final decision was left up to the audience, which elected McMahaon as the night’s victor. Hull passed on the title by crowning McMahon with a bottle of ranch dressing and passing down a sash embroidered with the words, “Mount Rose.”