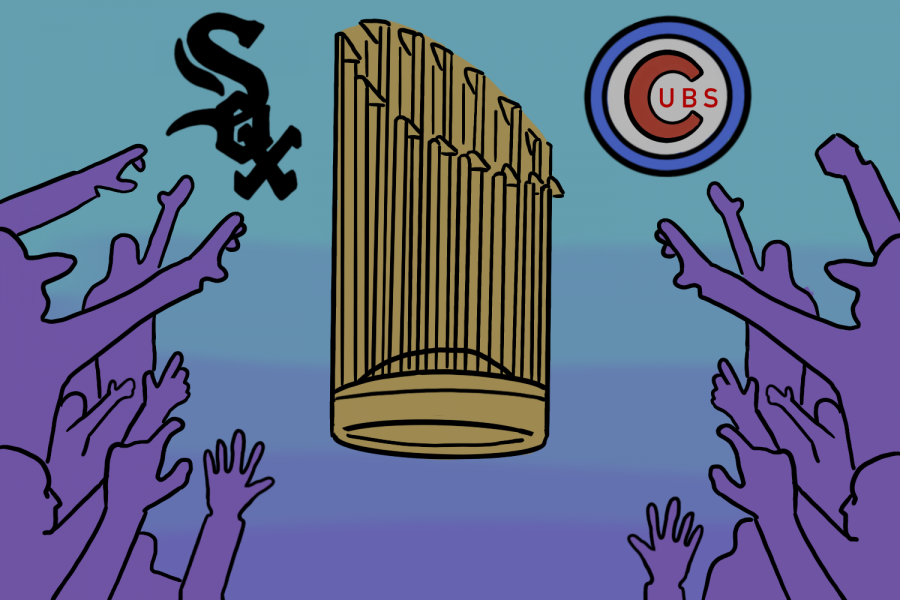 As a lifelong Chicago Cubs fan, freshman film and television major Joey Shea said he fondly remembers wearing his Kris Bryant jersey four years ago as the final out was made at first base, earning the Cubs the 2016 World Series win.

Shea said seeing another Cubs’ World Series title this year, but this time against the Chicago White Sox, would make for an even “sweeter” memory.

“I would love to see a crosstown World Series,” Shea said. “If that were to happen, I would probably put on my Cubs jersey for the entire World Series.”

This is Shea’s first year living in Chicago, and he hopes to see history made now that he can experience here in the city.

Fandom aside, Shea said he is unsure of the Cubs’ chances in the playoffs, but that is not stopping him from rooting for his team.

Other Chicagoans are also bracing for the Major League Baseball playoffs as both home city teams will be in the postseason in the same year for just the third time, inspiring dreams of a crosstown World Series.

The first time both teams were in the postseason at the same time was in 1906 when the White Sox defeated the Cubs in the World Series to win their first-ever championship. The second time was in 2008, when they both lost in the Division Series.

This year also marks the White Sox’s first trip to the playoffs since their 2008 loss to the Tampa Bay Rays.

The Cubs have more recent postseason experience, as they made the playoffs in four straight seasons from 2015 to 2018 and won the World Series in 2016.

Marcos Sandoval, a freshman photojournalism major, said he was too young to remember his favorite team, the White Sox, winning the World Series in 2005, which is why he wants to see them win this year.

Similar to Shea, Sandoval said if the White Sox were in the World Series and they could play any team, he would want it to be a crosstown matchup against the Cubs.

“If we win, we could rub it in their faces. If we lose, they can rub it in our faces, but you still have two teams from one city in the World Series,” Sandoval said. “That just screams awesomeness.”

Despite being a lifelong White Sox fan, Sandoval is part of the Cubs Scholars Program, which resulted in him receiving a $20,000 scholarship for college. Nonetheless, Sandoval has no intentions to switch sides.

“Growing up, I only paid attention to the Sox,” Sandoval said. “There was no point in me leaving when I have grown to love the team so much.”

Should either team make it past the opening Wild Card round, none of the remaining games will be played in Chicago. The MLB announced each playoff series beyond the first round will take place in bubbles—meaning the teams will live and play together without leaving a certain area—in various cities in California and Texas.

Monique Maye, an associate professor of instruction in the Business and Entrepreneurship Department who teaches “Business of Sports,” said even though the games will not be in Chicago, it should not change the fans’ anticipation for the playoffs compared to previous years.

“[The fans’] excitement level may be even greater because this gives us yet one other thing to celebrate during this time,” Maye said.

Maye said the games not being in Chicago will likely negatively impact the restaurants and bars near both stadiums because of limited capacities, but she anticipates merchandise sales will increase for both teams.

Maye said she enjoys watching the Cubs and White Sox play against each other during the regular season but thinks the intensity could be turned up a notch this year with a potential for a crosstown World Series.

“That would be so wonderful to see,” Maye said. “Because they are playing for a title, the ultimate bragging rights within a city with two major sports teams, that would be incredible to watch.”

As for her pick for the World Series, Maye said she is going with the Cubs.

The White Sox will open the playoffs against the Oakland Athletics Tuesday, Sept. 29 at 2 p.m. CDT in Oakland, while the Cubs face off against the Miami Marlins Wednesday, Sept. 30 at 1 p.m. CDT at Wrigley Field.