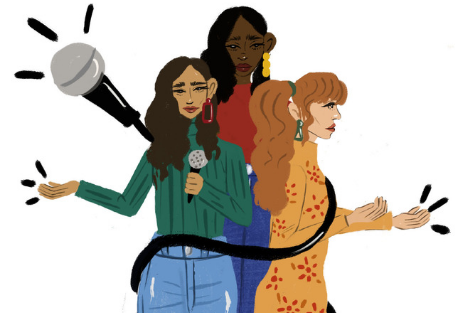 In a Nashville-based improvisation class, junior musical theatre major Caitlin Dobbins was 16 when she was told she would have an issue doing comedy as a woman.

“Most girls who are pretty and want to do comedy aren’t taken seriously,” Dobbins said the improv instructor in Nashville told her. “That’s something that has always stuck with me. If you really want to do something, then do [it].”

YouTuber Lilly Singh will soon become the only woman hosting a late night show on one of the four major TV networks.

Jordan Cohen, 2016 comedy alumna, had a male instructor who called her acting “brash” during an improv class.

“He couldn’t think of any other [positive] words, [such as] bold,” Cohen said.

Dobbins and Cohen say there is more work to be done for other marginalized groups, including people of color and transgender, nonbinary and disabled people.

“The thought of female empowerment has been stuck in this box, but there are more stories to tell,” Dobbins said.

Cohen has heard from her female friends  who also do improv that they feel as though men have consistently bulldozed over them in comedy classes.

But Cohen was not raised to back down and credits her confidence to her New Jersey upbringing.

“There’s been that roadblock for women of feeling like they need to wait to speak, like some sort of politeness,” she said. “But I think it’s impolite for someone to be talking over me.”

Cohen said one way to build women’s confidence while studying comedy is for colleges and theaters to make sure classes are full of people whom women feel safe around.

Dina Facklis, producer of and performer in The iO Theater’s “Virgin Daiquiri,” which has an all-female cast, said the dynamic of women in comedy has changed.

“I feel very respected from the men and women in the community,” Facklis said.

Similar to Cohen, as an improvisor Facklis said she chooses the characters she performs onstage. Facklis can wear multiple hats within one night, whether that be playing a male or female role.

At the root of all improvisers, there is a sense of insecurity, Facklis said.

“Someone recently told me I have ‘Big d–k energy,’ which is hilarious to me because I do not,” Facklis said. “I get intimidated just like anybody else.”

Prior to joining  The Annoyance Theatre’s “Holy F–k Comedy Hour” cast, Cohen said she noticed a trend of men on the show stripping down to their underwear during the performances.

“As soon as I became a part of the cast, I decided I’m not going to feel left out of that,” Cohen said. “It doesn’t feel fair that they can do it so comfortably, and for me, it’s a ‘wow’ [from the audience].”

Within the past year, Cohen tried her first McDonald’s cheeseburger on stage and performed in her underwear like she has seen male comedians do.

“[Because] it’s so uncommon that women feel like they can’t do things like that,” Cohen said. “But I don’t see why they shouldn’t.”