The Columbia Chronicle • May 15, 2019 • https://columbiachronicle.com/cfac-ratifies-labor-contract 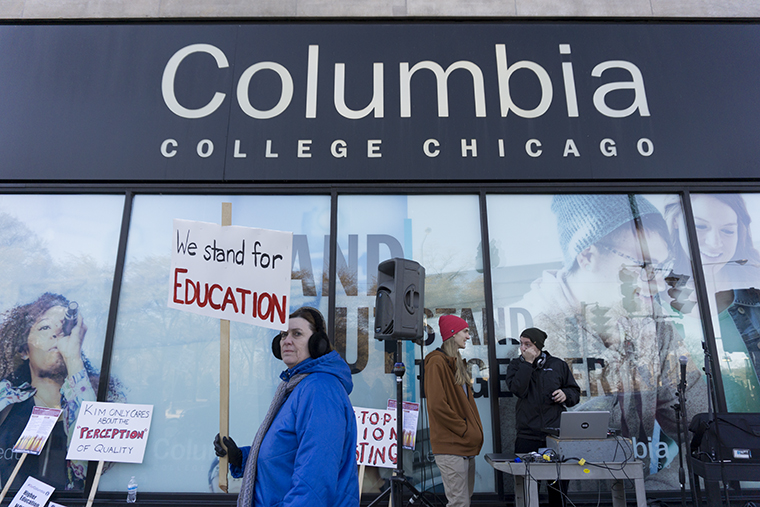 P-Fac members and students march along the sidewalk outside 600 S. Michigan Ave. Nov. 29 for the first day of the two-day P-Fac strike.

Columbia’s part-time faculty union and the administration have signed a labor contract, with 95% of union members voting to ratify the contract, according to CFAC President Diana Vallera.

Ratification was completed Wednesday, May 15, after six days of voting by secret ballot.

“We are pleased that the college and the part-time faculty union today officially signed a collective bargaining agreement following ratification by both parties,” said News Office Senior Director Lambrini Lukidis in a May 15 email statement to The Chronicle. “This contract reflects the college’s commitment to our colleagues in the part-time faculty, who are a critical part of the Columbia College Chicago educational experience.”

CFAC and the college have been negotiating for two years, resulting in one union strike Nov. 29–30, 2017, and an April 9 vote by union members authorizing another strike that did not occur.

The college endorsed the contract April 17, according to a joint statement that same day from Vallera, CFAC Counsel Robert Bloch, Special Counsel for Labor Relations Terence Smith and Chief of Staff Laurent Pernot.

Thale said this contract, which was available to members at informational meetings, is an improvement on past agreements, though he plans to look at it more in-depth. Thale liked the pay increase and said the contract strengthens job security for union members, but he had mixed feelings about the security provisions, such as a cap, which would limit the number of courses staff can teach.

Thale said the union could have handled the bargaining process better and that “union leadership was strike-happy.”

“I’ve seen a lot of bad strategy here, and I’m glad that it’s all over,” Thale said.

During negotiations, some CFAC members said there was a lack of transparency from union leadership regarding the contract, as reported by The Chronicle April 16. Other members felt the administration was not showing respect for Vallera.

The exact terms of the contract have not yet been released, but the college shared its comprehensive proposal in an April 12 email from the Office of the President. In that proposal, the college offered signing bonuses up to $550 and increased compensation per three-credit course. In a nod to seniority, it also offered annual appointments to members who have taught at least 51 credits. The college also proposed capping the future growth of graduate student instructors and teaching-track faculty.