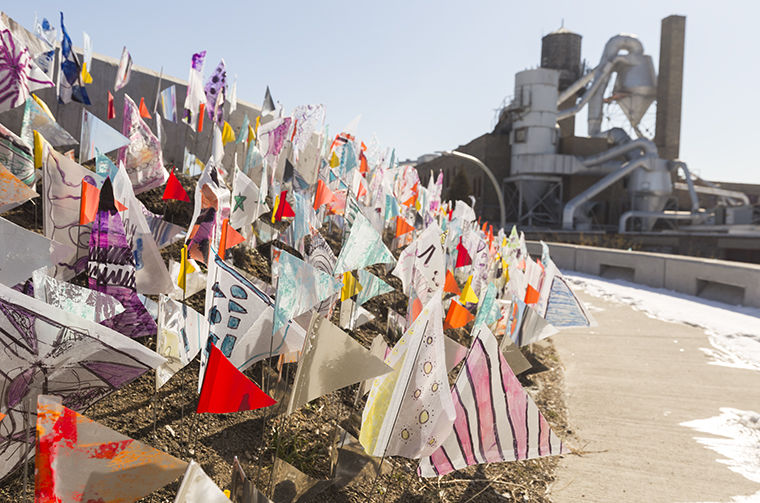 The flags along The 606 trail are part of “Declaration,” an installation representing equality and the importance of community, said artist Gwendolyn Terry.

During the day, they wave in the wind, speckling the brown earth with color. At night, they reflect the moonlight, resembling stars.

The 11,000 flags planted at the Exelon observatory, 1801 N. Ridgeway Ave., make up the “Declaration” installation surrounding the Bloomingdale Trail, commonly known as The 606. The project was created with 22 Chicago public schools and community organizations.

Artist Gwendolyn Terry has been working since November with The Trust for Public Land and Chicagoans to create a collection of flags that will  remain on display until mid-spring. The project focuses on the need to protect human rights and equality, an especially poignant issue in light of the current political environment, Terry said.

“Considering the overall climate we find ourselves in, it’s really important for there to be a reflective form and to know where you stand,” Terry said.

The observatory’s landscape needed an update, creating an opportunity for an artist to come in and change the space, said Caroline O’Boyle, The 606’s director of Programs and Partnerships. Organizers wanted to surprise regulars with thousands of flags and engage the community.

“The people running on the trail have seen the observatory a thousands times, but then they go  there the next day and it’s covered with glittery flags,” O’Boyle said.

The opening ceremony took place March 10, and since then O’Boyle said dozens of people stopped to ask her about the flags as she installed the piece.

Out of the 11,000 flags, 2,000 were made by students and community members, while the rest  were made by Terry. She asked participants to create a flag expressing what they stood for.

The first step was to choose one of three shapes for their flags: a triangle representing the participant, a square for their home and a circle for the world. Next, flag designers were asked to think of a meaningful phrase that would guide their use of color and design.

“Flags are such a loaded tool. They’re a signaling device for communication,” Terry said. “I saw this as being an ability to communicate non-verbally during a challenging time.”

Terry said she was inspired by a quote from the United Nation’s “Universal Declaration of Human Rights,” stating “All humans are born free and equal in dignity and rights.” The installation brings the quote to life through the variety of flags that illustrate everyone has an equal voice and opinion .

Rachael Boblett, a teacher at Humboldt Community Christian School, took part in the installation. She said the project was significant because the school does not have a full-time art teacher, so supplemental art projects are always beneficial for their students.

“It was fun that students  got to do art,” Boblett said. “They also got to see something that is not only part of the school but a part of the community,”

The scale of the project also shows how one voice can be amplified, O’Boyle said. If one individual made a flag, it seems insignificant; however, when a whole population produces flags, it shows the collective power of that group, she added.

“The city has taken a strong stance for it’s people,” Terry said. “It’s important to know where you stand on things and have a voice.”