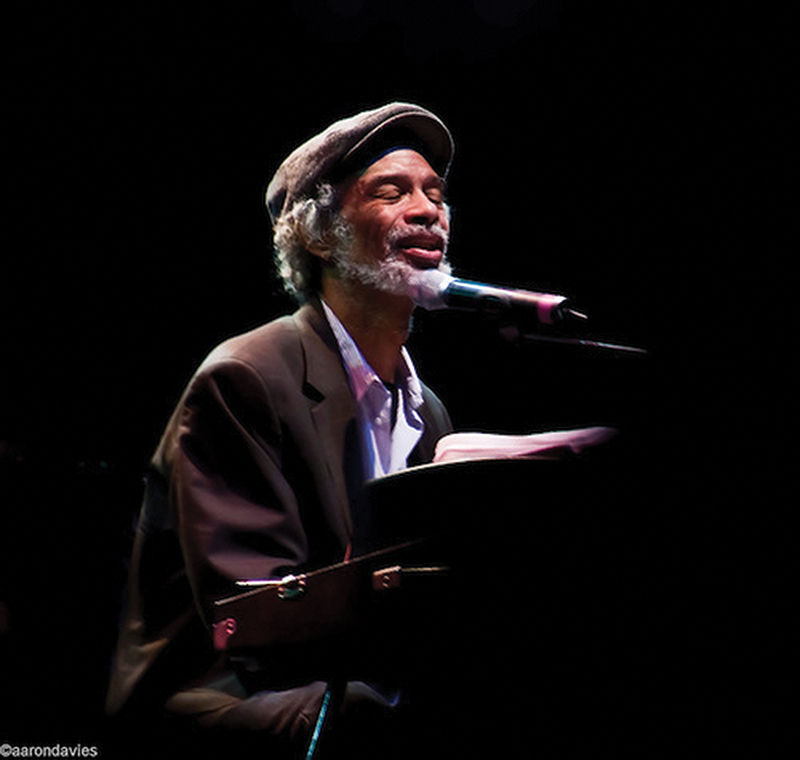 Gill Scott Heron performing at Womad 2011. Gill Scott Heron died today, 28th May 2011. He was a politically motivated jazz/blues musician and song writer. He had a great stage presence and always sung from the soul, and with a great smile. Fore sure, a great loss.

A tribute will be paid to legendary poet and musician Gil Scott-Heron on March 13 at the Hamilton Park Cultural Center, 513 W. 72nd St., in a performance called “The Revolution Has Been Compromised: Honoring the Words and Work of Gil Scott-Heron.”

“Discopoet” Khari B, a Chicago-based spoken word musician who organized the show, has assembled a band of accomplished musicians in Chicago for the performance, including jazz saxophonist Ernest Dawkins. The show will pay homage to Scott-Heron, who died in 2011 and is remembered mostly for his albums Pieces of a Man and Winter in America and the song “The Revolution Will Not Be Televised.” Scott-Heron’s work—especially his lyrics and delivery—was extremely influential in the development of hip-hop, which earned him the unofficial title “Godfather of Hip-Hop.”

Scott-Heron produced the majority of his work during the 1970s alongside jazz musician Brian Jackson. Jackson said the two of them collaborated on 11 albums during the decade, seven of which were released under both of the artists’ names. The collaborations differed from what others were doing at the time because the music provided a socially-conscious message, Jackson said.

“We were interested in educating, we were interested in putting forth information about what was going on in our world and what it was like growing up as young black men in America and some of the systems that we saw that were harmful to all of us,” Jackson said. “Speaking about [those things] instead of an ‘Ooh baby, let me get into your pants,’ kind of thing, there were enough songs that were talking about that.”

J. Wayne Tukes, senior advisor in Columbia’s Audio Arts & Acoustics Department and a contemporary musician in the New York music scene where Scott-Heron got his recognition, said Scott-Heron was heralded by other artists and musicians because of his ability to accurately capture the world around him in his work.

“He was a musician’s musician—from Pieces of a Man to Winter in America, he tapped into a theme and a pulse of the people in the times in which he lived,” Tukes said. “That’s why he was so effective. He hit it right out of the park. In terms of ‘The Revolution Won’t Be Televised’ and ‘Ain’t No Such Thing as a Superman,’ I think he, more than other artists, was not just singing for himself.”

Like many other artists before him, Scott-Heron fell prey to the harshness of the world around him and succumbed to his drug abuse,

“Gil was a very complex person who used his gift of song and writing to convey social consciousness and action, but as a lot of us can, he became a victim to his insight,” Tukes said. “The artist in society has a very powerful, compelling role…to point out what time of day it is and which direction to go, it’s a very important role to be one of the persons that brings clarity to others, sometimes to one’s

Ernest Dawkins said he will be playing saxophone in the band at the tribute show. Although Khari B arranged the show, Dawkins said he is also participating because he feels a connection with Scott-Heron’s musical spirit.

“I knew him in spirit,” Dawkins said. “My music comes from the same spirit. That’s really the relationship. You don’t really have to know anybody physically to know their spirit.”

Dawkins said he is also performing because he wants to pay respect to a man who did so much for the music he loves and plays to this day.

“Heron was kind of the predecessor of music and poetry,” Dawkins said. “He was like [one of] the first to do it, the Last Poets and Gil Scott-Heron were pioneers, particularly in jazz poetry. Since I’ve been doing it, it was natural for me and I was around during the days whenhe was. ‘What’s the word/ Have you heard?/ Johannesburg,’ I was a part of that age.”

Jackson said the collaboration was all about the message and had nothing to do with record sales.

“We both had the same message, we both were interested in the same ideologies, the same principles and trying to do something positive with music,” Jackson said.

Although Scott-Heron has received acclaim from fellow musicians and his fans, Jackson said he was just furthering a tradition that has been in existence for more than a thousand years.

“The tradition of combining music and a message is not new,” Jackson said. “I don’t know if we can name the beginning of it,” Jackson said. “It’s a tradition that’s been going on for thousands of years, and all we were hoping to do was to keep a little bit of that alive.”