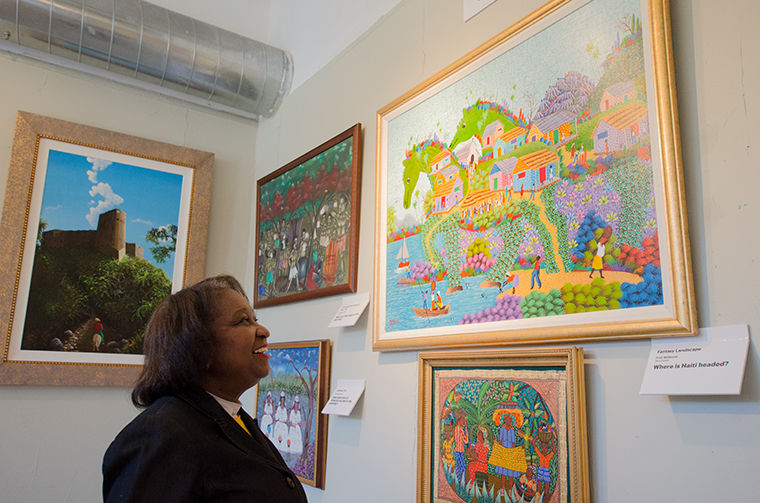 Elsie Hernandez, president of the Haitian American Museum of Chicago, stands for a portrait in the museum's space at 4654 N. Racine Ave.

Elsie Hector Hernandez and her family moved to the U.S. from Haiti in the 1960s when she was a young girl. Though she was not raised in Haiti, Hernandez embraced its culture as an adult and started the Haitian American Museum of Chicago, 4654 N. Racine Ave., in 2012.

TheChroniclespoke to Hernandez about her passion for educating the public about Haitian heritage and culture.

THE CHRONICLE: When and how did you decide to start the Haitian American Museum of Chicago?

ELSIE HERNANDEZ: [When I visited Haiti] in 2000, I was touched and wanted to know what to do to help the Haitian people and have an input as a Haitian person living in the United States.

I figured out that the media is concentrating too much on the negative side of Haiti because they are always saying that Haiti is the poorest country in the Western Hemisphere, but they never tell us why. They never really highlight anything else, so I said to myself that instead of concentrating on poverty, I would concentrate on the beauty and other positive aspects of Haiti.

It dawned on me that I like to go to museums, and museums have a way of impacting learning without imposing on individuals. When you go to a museum, you learn at your own pace, decide what you want to get out of it, and nobody is telling you what to learn.

I started doing the investigation on how to open a museum but I had to concentrate on [my son] and family, so I put the file away and I forgot all about it.

In 2010, I went back to Haiti as a nurse to volunteer after the earthquake. To see the humility of humanity right there in front of me was incredible, and [to see] the resilience of the people and how no one was whining or blaming God for their disaster. These individuals had lost everything in their lives—they only had their bodies. They were not complaining.

Then it dawned on me: Didn’t I have an idea of opening a museum? This is the time. I decided to start it all over again. I opened the museum in November 2012.

According to the consulate general of Haiti in [the Chicago] office, there are 30,000 [Haitians in the city].

It’s difficult to have a Haitian come to the museum for various factors. The mission of HAMOC is to promote and to educate the citizens of Chicago and the United States, so our main audience we want to educate are non-Haitians.

The Haitian community in Chicago is very different than other communities in the United States. [The Haitians here have] dispersed, there is not a cohesive community. They are mostly found in the southeast of Chicago [and] in Rogers Park. A lot of them [are] in Evanston, Naperville and all over the suburbs.

What are the stereotypes or stigmas about Caribbean people and Haitians in particular that you attempt to dispel with the museum?

The main [misunderstanding] is the Vodou religion, and that comes from the American occupation of Haiti. They occupied Haiti during the big film openings of Hollywood, so they just took advantage of cultures that they did not know and did not appreciate. They took portions [of the culture] like zombies and all that crap, and they blew it out of proportion.

They made their money, but in fact, they damaged the country’s culture.

This is one of the ways outsiders have taken a culture and just attempted to destroy it.

At the museum, we try to portray a positive aspect [of Vodou] as part of our religion and culture. It has nothing to do with the Hollywood movies. It’s not Voodoo, it’s Vodou.

What advice would you give other Haitians when educating themselves about their native country?

Because of the negative view of Haiti in society and the media, a lot of the young Haitian-Americans are moving away from saying that they [are] Haitian. I feel like they need to embrace Haiti.

Please do not try to discard your culture because eventually you will get to my age and come back to [your] culture. I wasn’t raised in Haiti, but I feel strongly attached. All Haitians must be proud of being Haitian.

I am proud to be Haitian. Vodou is in my culture, I do not practice it, but it is within me. Haitians need to embrace the culture of their ancestry. If they embrace it, they [will have] a better identity and will be better citizens in society. They will begin to change this bias and discrimination. I am very optimistic about it.