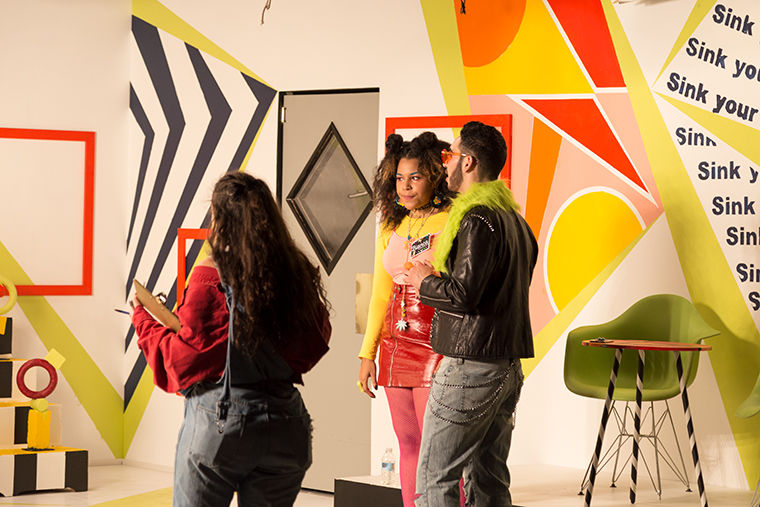 Students filmed a scene in the practicum film “Blood Orange”  at the Media Production Center, 1600 S. State St., Nov. 17 as part of their semester-long projects.

Saró Melero Bonnin, a senior cinema and television arts major, said she had no interest in being part of Columbia’s film practicum courses when she first came to the college. But when she got involved in her friend’s practicum production team, she became fascinated with the professional filming process.

“I was ready for that challenge to not do things my own way,” Melero Bonnin said. “[I was] ready to be guided through a different path.”

Johannsen worked on two practicum films while at Columbia, one as a line producer and the other as a producer. He said his job as a line producer included budgeting the entire film and finding shooting locations. The college funds these films with $5,000 each, he added.

“The number one challenge every film always faces is not having enough money,” Johannsen said, “which is good because you have to problem solve and figure stuff out on your own, but that is always the most stressful part.”

Melero Bonnin is currently an assistant director for the practicum film “Blood Orange” and said the process is like a full-time job because it requires in-class collaboration and shooting during weekends.

Committing to the film industry can be stressful and time-consuming, Melero Bonnin said. While it is taxing for her to juggle her coursework and films, she said her attraction to the process keeps her motivated.

Samantha Rabney, a sophomore cinema and television arts major, said she was introduced to practicum when she worked as a location manager on a set as a requirement for her “Producing I” class, which she called a beneficial learning experience. Sometimes she learns more from hands-on experience than sitting in a classroom, she added.

Rabney said she plans to sign up for practicum classes next year to gain more in-the-field experience.

Students learn more if they go out and actually experience the film-making process, Melero Bonnin said. Her time with practicum is helping her become more prepared to handle the film industry, she added.

“I love what I do,” Melero Bonnin said. “I wouldn’t be the person I am without it. I believe practicum is the best thing a filmmaker can be apart of if they wish to step outside of their process and everything they’re used to.”