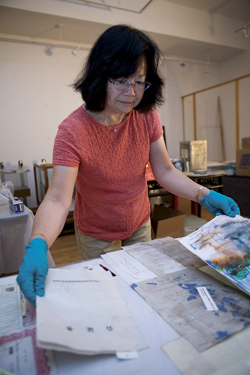 Along a street lined with Chinese antique stores, past the Lucky Lantern shop and Emperor’s Choice restaurant is a community that displays its culture and traditions with pride. But in the heart of Chicago’s Chinatown, one-of-a-kind priceless artifacts, representing more than a century of Chinese-American history, were engulfed in flames and reduced to ashes.

A two-alarm fire erupted at the Chinese-American Museum, 238 W. 23rd St., on Sept. 19 at about 2 p.m., less than a half-hour after the museum managers had closed for the day. The fire destroyed most of the four-story museum’s third and fourth floors and the roof and significantly damaged the first and second floors, said Eve Rodriguez, spokesperson for the Chicago Fire Department, who was at the scene when it happened.

“At this time it’s believed that the fire originated on the third floor’s east wall, at the center of the building,” Rodriguez said.

The third floor of the museum, where the fire originated, served as storage space for previous exhibits and artifacts, many of which were made of paper-mache and wood. Most of the inventory the Chinese-American Museum acquired from the Ling-Long Museum, the first museum in Chinatown which closed in the 1970s, was stored there.

The cause of the fire is unknown and an investigation is pending a report from the electrical engineer, but the fire department has ruled out foul play. No one was in the building or injured during the fire, Rodriguez said.

“Once they provide the report, the [Office of Fire Investigations] will continue [its] investigations,” Rodriguez said.

The Chinese-American Museum promotes exhibitions, research and education relating to Chinese-American culture and history in the Midwest. Most of the exhibitions and artifacts-much of it donated by the community-were destroyed in the fire, causing the museum to lose what board members describe as priceless symbols of history.

Soo Lon Moy, chairperson for the exhibition subcommittee, said the museum has lost some beautiful Chinese exhibits, including 23 boxes of donated, one-of-a-kind dioramas made of silk, feathers, fur and paper-mache.

She said they also lost Chinese garments worn and made by Chinese-Americans at the turn of the century as well as Chinese wedding dresses and children’s clothes, all of which were destroyed.

The fire brought with it a twist of fate, as Dr. Kim K. Tee, president of the Chinese-American Museum, said the museum’s board of directors had just received a permit from the city of Chicago to renovate the third and fourth floor. The board intended to expand the museum and, after working all summer, had just about finished preparing for the renovation when the fire drastically changed their plans.

Andrea Stamm, chairperson of the museum corrections committee, said she was shocked and in tears when she heard about the fire.

She said unique photographs and documents were destroyed in the fire, and workers are struggling to save what they can.

Museum officials also mourn the loss of artifacts they received from the old Ling-Long Museum.

“The whole Ling-Long Museum is gone,” Moy said. “It can’t be replaced. Even if they could duplicate them, it would never be the same.”

Though they suffered water damage, several museum pieces survived the fire. Objects on display on the first and second floors were safer than those in storage.

“We have to look at the good side. We have one surviving diorama,” Moy said. “One of our favorite pieces survived, too-a little doll [named He-He Boy that] we exhibited in our first exhibition, ‘Paper Sons.'”

An elaborately painted paper-mache crown worn by a model of Quan Yin, the Chinese goddess of mercy, also survived.

Despite a heavy loss, Tee said the museum’s board is already moving forward with restoring the museum, which he hopes to have done within a year.

“We all weighed our options for the future of the museum and we all agreed that we want to salvage what is left of the existing building,” Tee said. “The building was built in 1896, and we will try to preserve as much as possible of the original [structure].”

Several fundraising campaigns have already begun to acquire the needed funds to rebuild the lost museum, including efforts from the Chinese American Service League, adoption group Families with Children from China and the Chicago Cultural Alliance. The museum has also received help from the Field Museum and the Chicago History Museum, both of which contacted the museum immediately and sent volunteers to help salvage and aid in the conservation treatment of any remaining artifacts.

Stamm said even after such a tragic loss, the museum isn’t going anywhere.

“We need to be able to get out to the community the message that we’re here, we’re going to rebuild and we may come back stronger than ever,” Stamm said. “It’d be a crime not to rebuild.”

The museum, which first opened in May 2005, attracted more than 10,000 visitors in its grand opening and has since housed more than seven different exhibitions on different aspects of Chinese American history including Chinese immigration, fashion, artwork, toys and games and leisure activities.