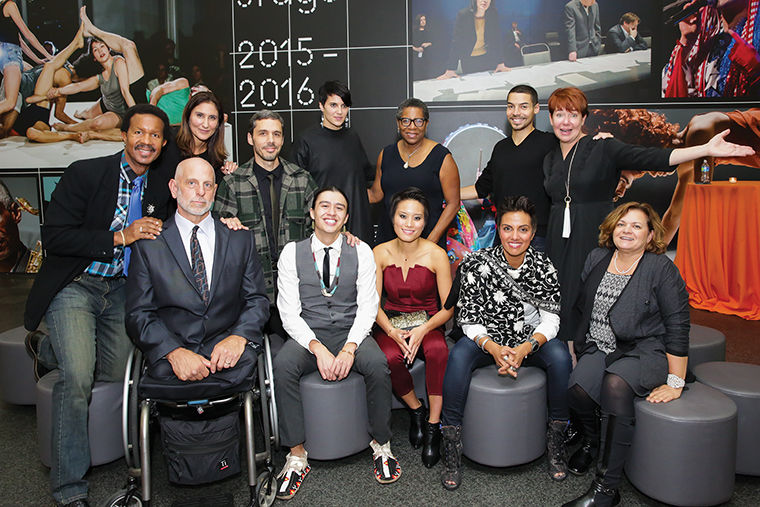 Fo Wilson (3rd from top right), an art & art history professor awarded a $25,000 unrestricted grant, said she focuses on different representations of truth in her work.

Fo Wilson said it was her many questions about the African roots of European modernism and the contributions made by the African diaspora to modern design that drove her to do the work she does today.

Wilson, an associate professor of art & art history and director of Columbia’s interdisciplinary arts master’s degree program, received an unrestricted award of $25,000 Oct. 5 from 3Arts, a nonprofit organization advocating for artists of color, women artists and artists with disabilities.

“It was a difficult decision, but I think it came down to Fo’s unique and innovative approach to her subject matter,” said Amanda Cachia, a Ph.D. candidate in Art History, Theory and Criticism at the University of California, San Diego and a member of the judging panel that selected the award winners. “We felt she was doing something a little different from her colleagues.”

It was this originality that caught the panel’s eye, Cachia said. She cited Wilson’s innovative use of video and sound installations in constructing pieces of furniture and her approach to diversity as exciting and relevant.

“Hopefully, [Wilson’s work] will highlight and bring more awareness to her audience about the issues of African-American cultural identity,” Cachia said.

The judging panel, composed of leaders from the respective disciplines, nominates local artists whom they think deserve recognition and financial support as respected leaders in their fields, Slawnik said. Approximately 100 Chicago artists were nominated.

Wilson, whose work represents histories and cultures that are rarely discussed, said much of her work focuses on histories that represent different points of view.

“There are other stories and narratives about history,” Wilson said. “Be open to other ways of interpreting. I want [my audiences] to be open to the fact there are many different paths and ways of looking at points of time and peoples and cultures. There isn’t one narrative that is the ‘truth.’”

Wilson, whose background is as both a maker and an art historian, said being an African-American inspired her to represent these other truths.

“Even though [the] African-American community has contributed significantly to American culture, I think many times we’re relegated to the margins of culture in terms of having agency,” Wilson said.

Tricia Van Eck, director of 6018 North, a nonprofit venue for innovative art and culture, served as a member of the judging panel.

In an Oct. 15 email, Van Eck said her role as a Chicago curator was to provide insight and context for some of the artists whose work was unfamiliar, answering questions about the medium.

“I look for artists who address important issues and even try to find solutions to complicated, difficult and often entrenched problems with their art,” Van Eck said.

She noted that 3Arts chooses the nominating committee and each member of the committee always looks for and selects three artists who present their work in a concise, clear and compelling manner.

“I think they do this by challenging either what art is, or how we live, experience, or understand the world and our role in it,” Van Eck said.