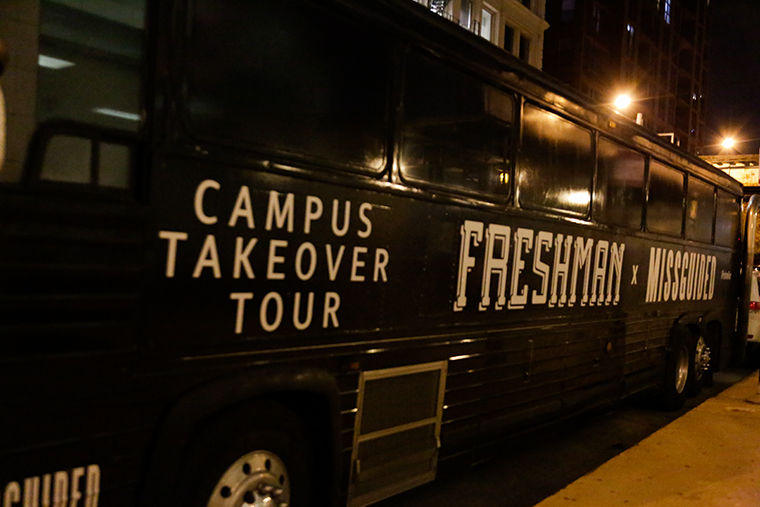 Jason Maek and Zaena have visited more than 24 campuses and plan to vist 47 in all before their New Year’s Eve release of their album Freshman.

Collaborative duo Jason Maek & Zaena visited Columbia Nov. 7 for a Campus Takeover event by Shuffle Presents as part of a promotional tour supporting the Dec. 31 release of their album Freshman.

Rosey Denton, the booking director of Shuffle Presents, an events subsidiary of the Chicago-based record label Maek, said Shuffle Presents was exploring ways to promote Maek and Zaena’s album and decided to visit Columbia and other campuses in cities nationwide.

“[Freshman is] their commentary on the American college education system and the coming-of-age experience,” Denton said. “We wanted to make it very college-focused and student-friendly event-wise.”

Denton said the group’s Campus Takeover tour started in October in Austin, Texas, and has gone through numerous states and campuses. The takeovers include a pop-up shop hosted by U.K. clothing brand Missguided, Pier 1 Imports giveaways and an online dorm makeover contest, she added.

They have visited more than 24 campuses so far and plan to visit 47 on the tour in all.

Denton said they gave out several gift cards and prizes to Columbia students, but the dorm makeover contest will be up for grabs until Dec. 10 on the Freshman tour website, giving Columbia students the chance to win the prize well after the visit is over.

Maek, artist and co-founder of the record label, said Freshman was created to provide an honest critique for college students. He said the common idea that college is the only way to reach success is false.

“When we came up with this project, we really wanted to highlight the college experience and provide a narrative for someone that exists within [the college] sphere,” Maek said.

Maek said the concept of the album stemmed from his own college experiences. He started college at 15 and completed two bachelor’s degrees in political science and psychology, a master’s in urban and regional planning and a doctorate in sociology.

Zaena, artist and co-founder of Maek, said she wants everyone at the Takeovers to be able to relate to the concepts within their album.

“I’d like to call it a soundtrack for your four-year college experience,” Zaena said. “There’s something for everyone.”

Both Maek and Zaena share the philosophy that music is a gift and should be free for all to listen to; therefore, they decided the album Freshman will be free for music-lovers upon its release.

“We hope that for [every] freshman right now, our music will be influential to them through their whole four-year experience,” Zaena said. “We want to connect, make a memorable experience for everyone and help guide them through [with our] music.”