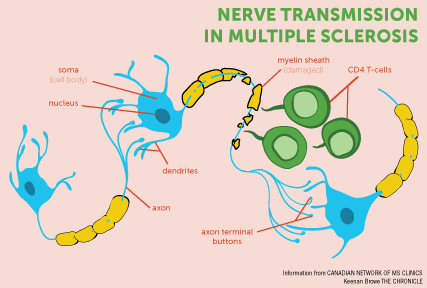 The recent discovery of a new type of blood cell may lead to strides in the treatment of multiple sclerosis, an autoimmune disease that currently affects approximately 2.3 million people worldwide.

The Biotech Research and Innovation Centre at the University of Copenhagen in Denmark announced the discovery of a new type of regulatory white blood cell in a study published Feb. 16 in the journal Nature Medicine. The cell has proven successful in combating the inflammatory T-cells in mice that induce the type of brain degeneration seen in diseases like multiple sclerosis.

In neurodegenerative diseases like MS, patients lose myelin, the insulation protecting neurons in the brain and spinal cord, because of inflammation caused by runaway T-cells.

The substance produced by the newly recognized cells, FoxA1, may counteract the nerve-damaging inflammation. The new cell is more abundant in patients treated with interferon, naturally occurring proteins that can help boost immune function, according to Dr. Anthony Reder, professor of neurology at the University of Chicago.

Interferon-beta, an MS treatment developed by Reder and his colleagues in the 1980s, acts as a supplemental protein that fights inflammation-causing infection. In the Feb. 16 study, researchers examined blood samples from MS patients who had received interferon-beta treatment for two years and found that the newly identified blood cells were more abundant than in patients who had not received treatment.

“It turns out that in MS, the interferon system is acting at below normal levels,” Reder said. “The immune system is always inflammatory. If your body goes out of control, your immune system will kill viruses and bacteria [and] also destroy everything else.”

Reder’s research was built around CD8 T-cells, while the research out of Copenhagen is focused primarily on CD4 regulatory T-cells. Both are cell populations of proteins that fend off damaging hyperactive T-cells when treated with interferon.

However, Reder said this current population of proteins appears to be more potent.

According to the study, the team was aware that unidentified blood cells were inhibiting diseases such as MS in mice.

Using gene analysis, they were able to identify the subset of lymphocytes—white blood cells contained in the immune system—that display FoxA1. They also found that when the FoxA1 molecule is isolated and inserted into normal lymphocytes, it can stave off MS symptoms.

Now that researchers recognize the connection between interferon treatment and the generation of suppressive cells in mice, Yawei Liu, associate professor at the University of Copenhagen’s Biotech Research and Innovation Centre, said her team thinks other species, including humans, could benefit from this treatment of MS. According to Dr. Vijayshree Yadav, a neurologist who specializes in MS research at the Oregon Health & Science University, this discovery could contribute to medical advances in light of similarities between mouse and human biology.

“I think any published research, especially when it’s based on the mouse model, is exciting,” Yadav said.

Yadav said researching any new pathway involved in MS pathogenesis is crucial to understanding the disease, but she stressed that not every symptom that shows up in mice is present in humans.

The group is currently testing the FoxA1 molecule’s effectiveness at preventing nerve damage in more aggressive cases of MS.

The paper also emphasizes that while initial studies focused on MS in animals, results could help treat other autoimmune diseases such as arthritis and diabetes.