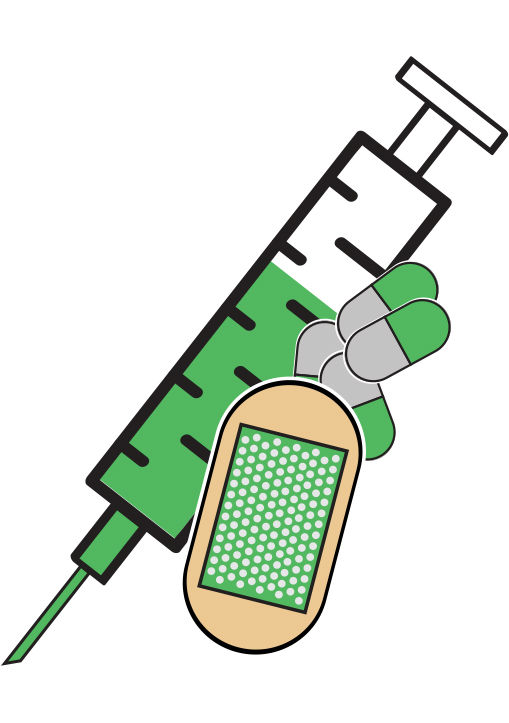 Despite the popularity of condoms, new birth control products for males could be on the market, but not anytime soon, according to Logan Nickels, director of operations and programing at Male Contraceptive Initiative, a male contraceptive research and advocacy group.

While no new forms of male contraceptives are close to being introduced, patches, pills and injections are in development and have shown promising results. In 2011, 45 percent of all pregnancies were unplanned, and among people aged 15–19, three out of four pregnancies were unplanned, according to a March 2016 report from the National Center for Biotechnology Information.

“Men don’t have a low-maintenance, long-acting contraceptive that allows [them] to take a long-term view of fertility and family planning,” Nickels said. “[Newer contraceptive options] fit the needs of more users than the current options give.”

During a test of an injectable male contraceptive, only four pregnancies were recorded from 266 male participants in the study—a 96 percent success rate, according to an October 2016 study in the Journal of Clinical Endocrinology and Metabolism.

Other forms such as a pill or reversible vas-occlusion have been shown to reduce unplanned pregnancies and can contribute to avoiding unintended pregnancies in the future, according to a January report co-authored by the Male Contraceptive Initiative.

“Men are looking for [a] long term, reversible [method] that doesn’t have to have the physical barrier a condom has,” Nickels said.

Of the major birth control options men have that allow them to remain sexually active—vasectomy or condoms—the condom is the only option that doesn’t require a surgical procedure, making it more accessible to college students.

Even though the condom boasts an efficacy rating of 96 percent when used properly, misuse of condoms brings the efficacy rate down to 87 percent, according to Nickels.

Men consider condoms an imperfect solution, Nickels said. Even though condoms are popular, there is still a demand for other contraceptive options, such as a pill, which 49.3 percent of the 9000 men  surveyed said they would be open to taking, according to the January report.

Despite success of some contraceptive methods, and nearly half of the men showing interest in new forms, drugs that were put through trials have had setbacks that shut down the trials early.

A trial of an injectable contraceptive resulted in an estimated 910 adverse effects related to the method, such as muscle pain at the injection site and acne. Other more severe side effects included depression, one case of an irregular heartbeat when taken off the medication and intentional overdose of acetaminophen, according to October 2016 press release on the report.

However, the trial’s abrupt end was met with backlash because women face similar side effects from contraceptives with equivalent forms of birth control.

The risks and side effects of these new methods will be a factor in whether they’ll be used, said Austin Rees, a sophomore cinema and television arts major.

Even with new forms of male birth control in development, plenty of rigorous trials are needed before they can be put on the market, according to Nickels.

“There’s a lot of work to be done, [but] there are a number of early candidates for male birth control that show a lot of potential,” Nickels said. “There is a lot of excitement in the field.”