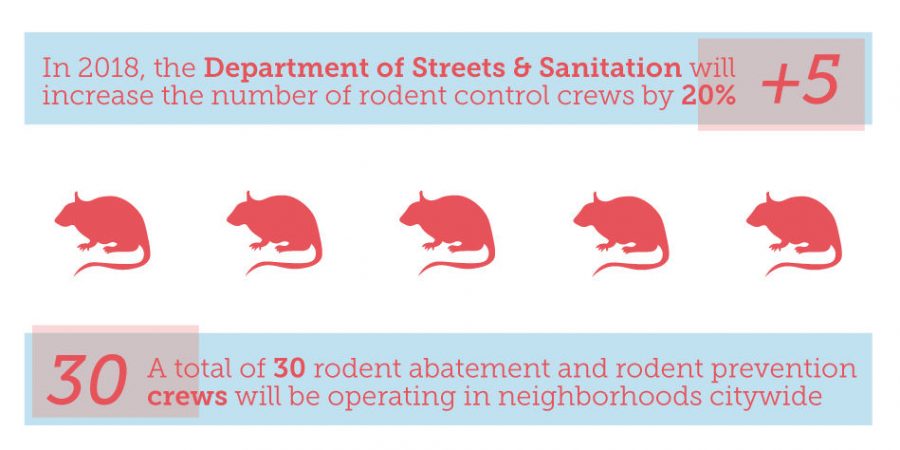 Chicago is turning to new strategies and tactics in the city’s ongoing war on rats.

In the city’s 2018 budget, Mayor Rahm Emanuel is asking for an additional $2.5 million for rodent control, according to the Oct. 13 budget proposal. The funding will pay for five more rodent abatement and prevention crews, totaling 30 crews. The city will also improve the quality of garbage handling by investing $1.5 million in replacing and repairing old containers.

“We see [rats] all the time [in the neighborhood],” said Angel Colon, a 27-year-old plumber’s assistant from Logan Square. “There isn’t a day that goes by where you’re not seeing them running through the yard or hear them in the garage. They’re everywhere.”

On Oct. 16, Chicago was named the most rat-infested city for the third straight year on pest control company Orkin’s annual top 50 rattiest cities list. Since the beginning of 2017, the city responded to 41,316 rodent complaints, an average of 113 per day. The top communities for 2017 rat reports include West Town, Logan Square and West Ridge, according to an Oct. 2 analysis of the Chicago data portal by the Chicago Tribune.

Emanuel also created the Bureau of Rodent Control as part of the 2017 budget, which works on new methods to fight the rodent problem, such as testing fertility bait—which should reduce rodents’ ability to reproduce—and using dry ice in green spaces throughout the city, according to an Oct. 13 mayoral press release.

“We are grateful that the mayor is always trying new initiatives,” said Sara McGann, director of Public Affairs for the Department of Streets and Sanitation. “I think [Chicago is] doing very well [in handling its rodent problem]. We are managing an issue that will always exist.”

Chicago started an outreach campaign in 2015 to encourage all residents to make complaints to the city about rodent issues. That year, the city received 30,000 rodent complaints, which has since increased by about 10,000, according to McGann.

“I’m glad they are dedicating resources to it, but I don’t think anything the city does really does anything [to stop the rats],” said Bob Bockel, 46, a Logan Square resident who works in personal finance for Lakeshore Wealth Strategies. “The rats have adapted.”

Rats have survived because they take advantage of food sources such as garbage cans, open food containers, pet food bowls and carcasses in cities across the world, according to Orkin’s website.

“We’ve had [the city] replace our garbage can, in the past 20 years I’ve lived here, three or four times,” Colon said. “It looks like the rats are getting bigger. The hard plastic [garbage bins are] not enough.”

DSS has repaired and refurbished more than 10,000 black refuse carts that may have holes and more than 3,000 blue recycling carts in 2016 to October 2017 to help keep rats away, according to an Oct. 13 press release.

“People need to be more vigilant about making sure their trash goes into a bin rather than being alongside it,” said Craig Klugman, a Bioethics and Health Humanities professor at DePaul University.

Rats cause various problems for Chicago residents, Klugman said. Rats—or their fleas—can be carriers of various diseases, including the notorious Bubonic Plague. Rodents are also a nuisance and can chew through wires in homes or through wooden foundations, he added.

Education on how to handle and prevent rodent problems is still the top priority in handling the issue in Chicago, according to the Oct. 13 mayoral press release.

“I’m not even a cat person, but I’ve got cats because the rats bother me so much,” Bockel said. “[The rats] did affect how much I wanted to be outside in my backyard.”