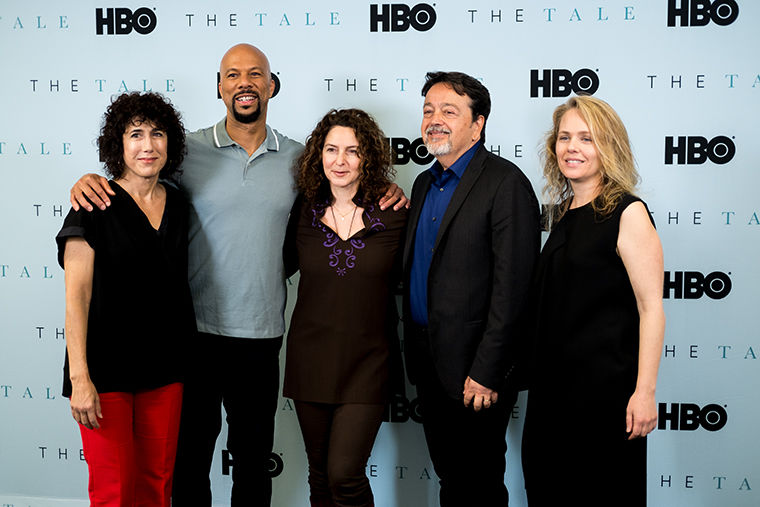 Jennifer Fox, director and writer for The Tale, Common and Len Amato at the HBO premier.

The auditorium lights dim as a “viewer discretion advised” warning and the toll-free  number to the Sexual Assault Hotline in bold white lettering appears onscreen.

“The Tale,” a film memoir written and directed by Jennifer Fox, recounts how Fox, a respected documentary filmmaker, comes to realize the romantic relationship she had with a 40-year-old coach as a 13-year-old athlete was actually sexual assault and rape.

Starring Laura Dern as Jennifer Fox, rapper Common as Fox’s boyfriend Martin and Jason Ritter as coach Bill, the film debuted at the Sundance Film Festival January 2018 and will be released on HBO May 26.

Columbia, in conjunction with Heartland Alliance and One Love Foundation, hosted a screening of “The Tale,” followed by a discussion with Fox, Common, and HBO President Len Amato at Film Row Cinema, 1104 S. Wabash Ave., May 2. The Chronicle sat down with Fox and Common to talk about their roles in the film, Sundance Film Festival and sexual violence.

THE CHRONICLE: Why is it important to spread the message from “The Tale” to college students?

FOX:This is a subject that we don’t know how to talk about. Many women know someone who has been abused, many boys have been abused and don’t know how to talk. This cycle of sexual violence and hurt is something we all struggle with. Not just our generation and your generation, but our parents’ generation and our grandparents’ generation. Time, time is up and it is time that we can change history and say we are ready to face these difficult topics and make a difference.

Common, what was it like supporting Dern in her role as Jennifer Fox?

COMMON: I was excited in being a supporting character and a man who was supportive. Martin is a good man, and while his partner is going through a lot, he is doing his best to be there for her. It was important, as a man, to be able to play my position and step back. This is a story that deals with a woman coming into her own and figuring things out. I am happy it wasn’t about all of the guys coming to save the lady.

What does it mean to be an artist and an activist?

FOX: Art is about trying to find language that expresses reality in a new way. When art works, it gives you insight into life in a way you’ve never seen it before. My effort with “The Tale” was to get inside something that the world glosses over because it is too painful, which is abuse and trauma.

COMMON: My mother is a teacher at Chicago Public Schools, [and] she would come home and would tell me about students who were sexually abused. When I saw this film, I saw child sexual abuse in another perspective. The visual effect and the grooming made me see it from another perspective and [showed] me that I have to be more responsible toward stopping this issue and this cycle. That is the power of art.

How does it feel to have this film be shown at Sundance to HBO?

FOX: When you make a film like this, you don’t know how the world will react. The film could have not gone anywhere, and we had such an amazing reaction at Sundance. Also, partly due to the Me Too and Time’s Up movements, [people] are ready for a complicated and nuanced story.

How do you make a traumatic movie without traumatizing your actors?

FOX: There are a lot of steps and one of the good things about coming from documentary is all our work is about working with people. The first thing is casting. Isabelle [Nélisse] was the only person I met who I felt could play the role [of young Jennifer Fox] naturally. We had a hard time casting [Nélisse], [but] when we found her, she had such a grounded reaction. She was fine with the script and she wanted to make a film; she wanted to help people. [Nélisse] is never near [Ritter] in reality. There’s a body double, but even what you see is shot on a vertical bed. Although [Nélisse] knows the script, she never came in contact with active play or anything that was sexual.

Is creativity the ultimate way of healing through all of this?

COMMON: So many people need mental support. They need real therapists who can come in and listen and support them mentally and emotionally. Art is healing and it gives you an outlet, but we also need other tools and resources, and therapy is one of the things.

Was it hard to find someone to play the role of an assailant?

FOX:Jason’s role was the uncastable role in this film. That was shocking and tragic because I thought it was such an important role to shed light on. We were trying to cast a man that isn’t the stereotype who sexually abuses kids. In the media, we want to say it is that odd-looking man. People who sexually abuse are embedded in the community, they are well-loved, successful, they are often seemingly nice people. We really wanted to go against type and [Ritter] fulfilled that.

What did it feel like to have those repressed memories resurface while writing the script?

FOX: They weren’t suppressed, this is an internal feeling. None of what you see on film was suppressed. I never forgot what happened to me. The language you hear in the film is exactly what I remember. Whole paragraphs were burned in my mind, but I didn’t coat it as negative. I felt loved, I felt this is me as a 13-year-old, I was willing to pay the price for the admission into this world of adulthood, not know what that price is, and that is the problem of adolescence. I was someone who felt invisible, didn’t feel loved, the boys were not looking at me at all during that time. What I got out of it was a way to see myself differently, what might have been not dealt with was the pain. The mind is incredible and it can cut off and deal with it now and save the rest for a later date if you can ever get there.