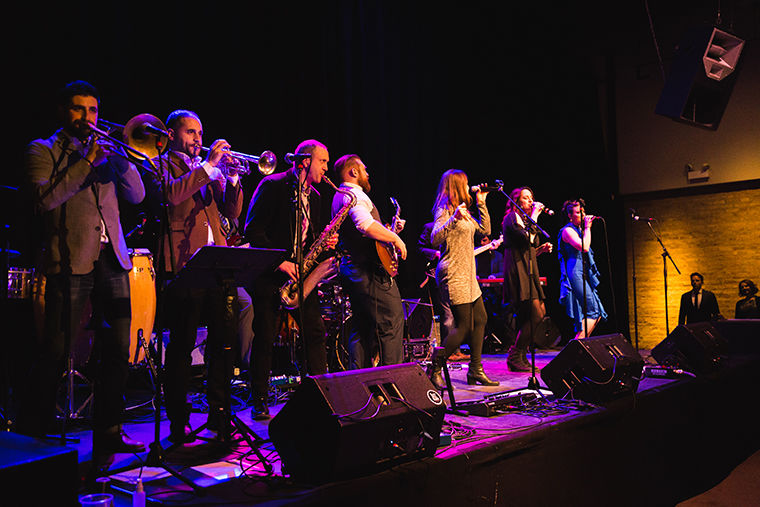 Showcasing the fun and excitement of live music for parties and events, the Bluewater Kings Band put on its free monthly show and played a wide range of music Feb. 20 at Chop Shop, 2033 W. North Ave.

The free show at Chop Shop was started by the Bluewater Kings to promote live music and give potential clients the opportunity to see them before they are hired for a performance, band manager Molly Parlier said. Band members said Chop Shop has been the perfect venue for them for two years.

The band belongs to the International Musicians League, an organization that advocates for musicians and bands by finding venues, setting up shows and making sure musicians are paid, according to Michael Edward, administrative assistant for the organization.

Edward said musicians become part of the International Musicians League through invitation or recommendation. The organization has locations all over the world, including London, Paris and Sydney, as well as cities in Canada, the U.S. and other countries.

“The cost of entry is nothing, so you have nothing to lose by checking out live music,” Edward said. “Live music is a completely different beast compared to a recording. We are trying to steer people away from using DJs and show why a live band is so good and why it’s going to add an extra element to their party.”

The Bluewater Kings Band is comprised of a collection of musicians from the Chicago and Detroit areas who have played in various bands before. In 2013, the musicians decided to put together a larger cover band specifically to fill dance floors in place of DJs.

The band holds auditions for new members on the free showcase night, and Parlier said some of the core members in the group were Columbia students.

“Believing in yourself and advocating for yourself is huge,” said Maggie Vagle, a singer in the Bluewater Kings Band and Sidewalk Chalk, and 2008 vocal jazz performance alumna.

Vagle has been singing in the band for four years since a friend suggested she audition in 2015. She said her favorite part about performing with the band is that she has the opportunity to sing and perform for weddings.

Parlier said the band wants more people from the public—not just clients—to come to the free events. Their goal is to get people to loosen up and dance.

The Bluewater Kings perform in a number of cities in the U.S., but according to Edward, they play Chicago and Detroit the most.

“Chicago and Detroit have particularly good music scenes,” Edward said. “[Some] of the best in the world.”