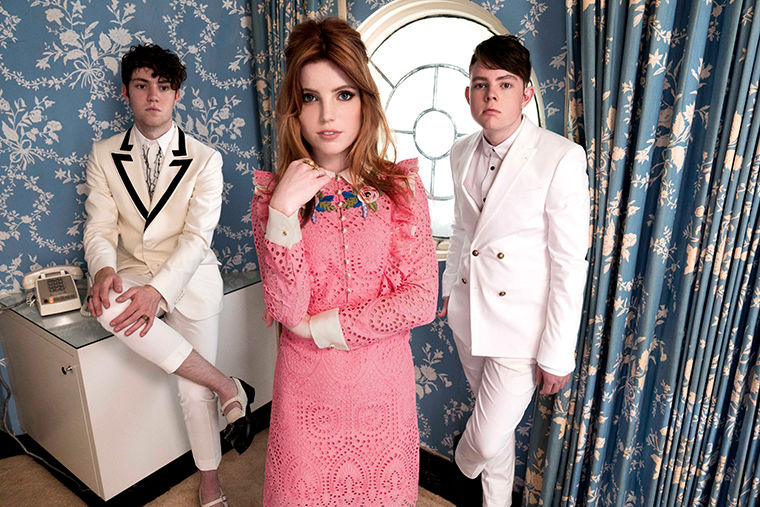 Echosmith will be performing in Chicago April 14 at Metro, 3730 N. Clark St.

Echosmith is back. The indie-pop pioneers from Chino, California, have hit the road after postponing the tour for their latest EP, Inside a Dream.The sibling trio, formerly a quartet, made a cosmic splash in 2015 with the popular “Cool Kids” and has returned with more music than you could shake a synth at.

The Chronicle spoke with Sydney Sierota, the band’s lead vocalist, about Echosmith’s return to touring and the importance of spreading positivity.

THE CHRONICLE: How was it to finally kick off the tour in San Francisco after it was postponed?

SYDNEY SIEROTA: It felt great. I’m so excited to finally be back on the road and performing for people again because it’s been a while for us. The crowd was so excited and singing along to every song; it was even better than I could have hoped for. I’m so excited for the rest of the tour now that we started with such a great show and with such passionate people. I don’t know if I want to take another break that long because I feel so at home on stage.

In the statement that you gave for the postponing, you said that you were overrun with inspiration; what was that inspiration and where did it come from?

Honestly, it came from life itself, which is always what we’re inspired by because we’re telling our stories. We had been writing this stuff for our album since the beginning of 2016, and it took us a long time to figure out what direction we wanted to go in musically and lyrically and what kind of stories we wanted to tell.

We’ve written so many songs for this album it’s ridiculous. But toward the time when we were going to release the album, we started to realize that we weren’t quite ready to put it out yet. We wanted to make sure that every song was intentionally put there, not just because we had written it and it should be on it because it’s catchy, or any of those kinds of reasons. We wanted to make sure our message was told in the right way and with the right songs. And there were songs that we wrote in the beginning that didn’t really feel as relevant to our stories now.

Having grown up together and tapping into your experience as siblings, is the music creation process unique?

It’s helpful for songwriting to have multiple perspectives on the same situation. So I get to talk about my perspective but also Noah’s and Graham’s. It gives us a lot of content and material to jump off of. We’re also able to be super honest and feel the freedom to be open with each other, even if it’s a hard experience that we’ve gone through.

Your latest song “Over My Head” was released less than a month ago. How was it created?

“Over My Head” is a personal song for me and for the whole band. I’m a huge communicator, and I love connecting with people and making sure that we all understand each other.

I don’t like having drama, so I like to talk through everything so we can move on. But this song is talking about the frustration that you have when you try to make things work and you try to get someone to understand you and it isn’t working. That happens sometimes.

My favorite part of the song is the bridge because it’s the saving grace, telling them, ‘I still love you and I want to make this work, and I actually do want to understand you even though it is so beyond frustrating now,’ and that message needs to be heard because there are so many movies and songs out right now that are giving the message of, ‘Oh, I’m mad at you, so I’m done with you forever.’ That’s not what our band stands for.

How do you think your band’s positive vibes fit into the more hedonistic modern soundscape?

It’s easy to get caught up in the negative, even if the positive is what we want. Nobody wants to be depressed, nobody wants to feel negative, but it happens. It’s easy to keep yourself in that situation because you’re used to it. With music, it’s important that we bring as much positivity and love as we can because there’s obviously not enough of it. If we’re going to have a voice and a message, it may as well be a good one.