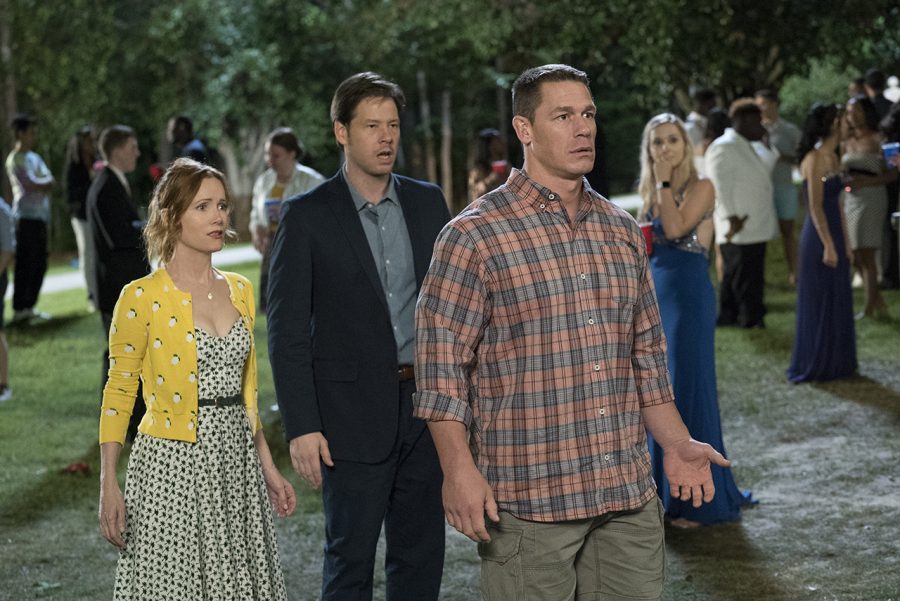 When Roger Ebert reviewed 1967’s “The Graduate,” he wrote, “[The Graduate] is funny, not because of sight gags and punch lines and other tired rubbish, but because it has a point of view. That is to say, it is against something. Comedy is naturally subversive.”

“Blockers,” directed by Kay Cannon, who also wrote the first two “Pitch Perfect” movies, opposes Ebert’s knowledge and relies purely on gags, jokes and setups to encompass its nearly two-hour run time. Like most popular comedies, the film works better as a stand-up routine rather than as a film with a message about kids, parents or similarities between the two.

There’s plenty to laugh at in “Blockers” as the three parents—played by John Cena, Leslie Mann and Ike Barinholtz attempt to stop their three teenage daughters—played by Gideon Aldon, Geraldine Viswanathan and Kathryn Newton—from having sex on prom night. Audiences see the parents reliving parts of their youth within a culture they’ve detached from and are now unfamiliar with. There’s butt chugging, car explosions while the characters reference “The Fast and The Furious,” and even the classic “caught in the room while two character’s ‘do it’” trope.

The frustrating thing about “Blockers” is that within the rules of its perfect universe where the kids and parents only have to worry about prom night is that it works. The gags work. The jokes work. The ending works. However, it’s the premise that everything is perfect outside of this extravagant hide-and-seek narrative that is irritating.

This film has nothing to say about real-world “coming of age,” and although it presents itself as a semi-realistic film, it can’t be taken seriously. The kids are handed everything from a limo to DMT macaroons.

On a side note, what high school students smoke weed, pop Xanax and take DMT, for the first time, all in the same night? If you’re trying to create a narrative during which the audience realizes that these kids need to make mistakes on their own, don’t have the characters completely self destruct in the span of an hour.

Cannon does attempt to create emotional depth in Barinholtz’ character withhis estrangement from his daughter, and it worked for a split second. It is obvious that Barinholtz is grasping at emotional nuance, but this too is quickly passed off in favor of another joke.

Overall, “Blockers” seems like a good stand-up routine that the writers structured scenes around to make a movie, but its commentary on parenting and the time gap between high school and college falls flat.

At best, it’s a John Hughes wet dream and at worst, it’s a slap in the face to “The Graduate” and a deconstruction of what makes comedy movies memorable, impactful and touching in the first place.