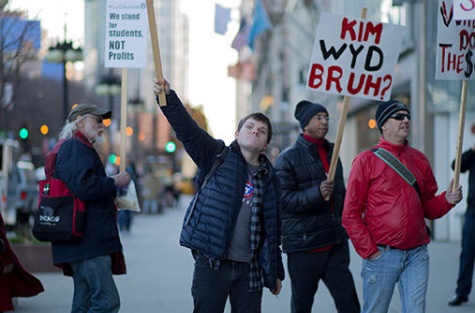 A large number of students missed class time during a two-day strike held Nov. 29–30 by the college’s part-time faculty union, as reported on the Front Page.

Senior theatre major Genesis Castillo said she supports P-Fac but wishes the strike had been scheduled at another date, not right before finals.

“It would have been cool if they could have just waited until [after] the end of the semester so we could finish classes,” Castillo said.

Maria Argyrou, junior American Sign Language-English interpretation major, said her “Culture, Race and Media” class was scheduled from 9 a.m. to 11:50 a.m., but because of the strike, the class ended at 9:30 a.m.

Argyrou added that she was disappointed with her “Introduction to Career Opportunities with the Deaf Community” class because it did not cover the scheduled topics. That day, Argyrou was supposed to learn about social work in the Deaf community, but they instead spent half of the class discussing the strike.

“For that class specifically, I was disappointed because what we were planning on discussing that day, we didn’t end up discussing at all,” Argyrou said. “That was something I was looking forward to talking about.”

Ayobami Akinlade, a senior audio arts and acoustics major, said he did not know anything about the strike until one of his professors sent an email to the class a week before.

“Now that I realize there are issues going on with teachers, I’m concerned as to whether they’re being treated correctly [and] how I can get involved,” Akinlade said.

Despite her history class being canceled for the strike, Joyce Guo, a sophomore English and creative writing major, said she does not think it will affect student performance on final exams.

“I’m glad that people are finally able to physically rally together and show [the administration] we have our voices [and] our voices matter,” Guo said.

One teacher took the time to discuss the importance of the strike in an “Introduction to Marketing” class, so the students were able to understand what was happening on campus, said Karen Ortega, a junior fashion studies and business and entrepreneurship double major. Ortega said she does not believe the strike will have a negative impact on her finals and also enjoyed how her professor discussed why they thought it was important to have the strike.

“If you want to change, you have to make an action, make a proposal. The strike [was P-Fac] just walking around,” Ortega said. “If I were to do it and were really upset about the student center, I would write a letter, have petitions or do something that is an action, not just protesting.”

Update 12/5/17 at 2:20 p.m.: A previous version of this story stated the “Introduction to Career Opportunities with the Deaf Community” course ended early at 9:30 a.m. The correct course was “Culture, Race and Media,” which begins at 9 a.m. and concludes at 11:50 a.m. The Chronicle regrets this error.